It’s Tuesday night and this writer entered a cinema to watch Aquaman, and by the time the movie’s over, the news was everywhere: UMNO leader Zahid Hamidi has decided to step aside as president of the party.

This comes after a flurry of resignations from UMNO MPs, with many of them doing so to protest Zahid being president. However, their goal is arguably only half done for now, as Zahid made it clear that he’s only going on garden leave for the time being, leaving power to his deputy Datuk Seri Mohamad Hasan. Mahathir watching all the drama unfold in UMNO. Well either that or Aquaman.

And speaking of all those UMNO bois who left the party, there’s also the question of where exactly are they going laa. Now it looks as tho the answer to that is seemingly the Malaysian United Indigenous Party, aka Bersatu. It’s even gotten to the point where Bersatu president Tan Sri Muhyiddin Yassin had point out that there’s actually a standard operating procedure of sorts for UMNO members who wanna jump ship, especially on more controversial UMNO members, such as Abdul Rahim Thamby Chik.

“The modus operandi is for them to announce their exit from Umno. Then there is a cooling period before they make their decision on which party they want to join. This gives us time to conduct a vetting process… they must not be involved in corruption or abuse of power,” – Tan Sri Muhyiddin Yassin, as quoted by Malaysiakini

Now this appears to be quite a far cry from the days just after GE14, when Prime Minister Dr Mahathir said that those from BN who wanna defect to Harapan will not be accepted as registered members of coalition parties. But with so many MPs leaving UMNO and some already completing the jump to Harapan, we here at Cilisos think that it’s probably a decent time to round up and count who left UMNO and joined Harapan, who left and are trying to enter Harapan but not yet confirmed, and who left UMNO but are independent for now.

And yes, in case you’re wondering, that’s exactly how Cilisos writers look like. While a lot of the more recent UMNO resignations (which we’ll get to later) were because of their dissatisfaction with Zahid Hamidi, surprisingly the reasons these four former UMNO MPs gave vary a little bit. According to Datuk Noor Azmi -the first UMNO MP to quit btw – he left because he felt that he was deemed an outcast by his own Bagan Serai UMNO division colleagues. He also added that his super small majority win of just 172 votes in GE14 was because his UMNO division tried to sabotage him in the election.

Datuk Seri Mustapa, better known as Tok Pa, gave a slightly different reason behind him leaving UMNO. He felt that UMNO’s current direction isn’t in line with his own personal principles anymore. As for Datuk Mas Ermieyati, she left because she wanted to find a more efficient way to help her constituency of Masjid Tanah. Similarly, Datuk Rozman Isli left UMNO for Warisan because he felt that by doing so, it would be better for his constituency of Labuan on top of fighting for Sabahan rights.

If you know this reference then it looks like we’re… i-nsync.

So yes, despite what your second grand aunt on your father’s side is telling you on Whatsapp, as of time of writing, there are only four UMNO MPs who have successfully jumped ship to Pakatan Harapan. Of course, there are also some big names who, while not MPs, have still left UMNO to swim over to Harapan, such as former UMNO sec-gen Datuk Seri Mohd Radzi Sheikh Aman, who joined Bersatu. And then there’s also 14 state assemblymen who left UMNO following GE14 and now find themselves carrying Bersatu membership cards.

However, while some might’ve thought that plenty other UMNO MPs would be defecting….

A further THIRTEEN MPs have ditched UMNO, but are still independent for now

Okay so you may have heard the recent mass exodus of Sabah UMNO members recently, which included not only five Sabah MPs, but also nine state assemblymen, two state senators, some big names such as former Dewan Rakyat Speaker Tan Sri Pandikar Amin and Salleh Said Keruak as well as 21 of their 25 Sabah UMNO division heads. You can check the full list of those who left UMNO during the mass resignation here. The Sabah UMNO members who collectively told the party ‘um… no more’. Image from NST

The Sabah UMNO exodus leader, assemblyman Datuk Hajiji Mohd Noor, also added that he expects at least 250,000 of Sabah UMNO’s members to also quit the party. In fact, things are so bad for UMNO in Sabah right now that they literally only have one MP – Kinabatangan’s Bung Mokthar – and one assemblyman – Tan Sri Musa Aman – left in the state. 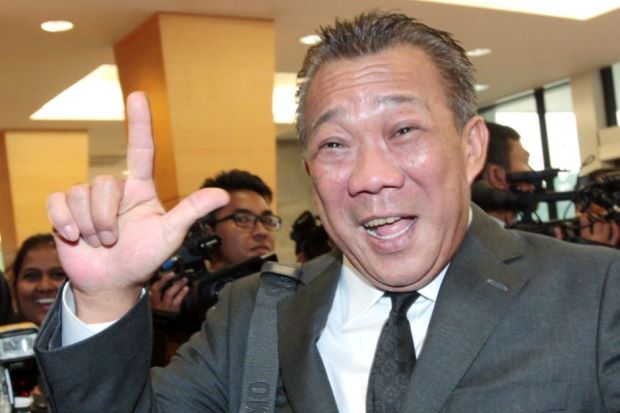 Does that ‘L’ stand for ‘Lonely’? Image from The Star

That being said, they aren’t the first from Sabah to quit UMNO tho – that uh, ‘honour’, goes to former Minister of Foreign Affairs and current Kimanis MP Anifah Aman. While the recent joint resignations were fueled by displeasure over the current leadership at UMNO, in Anifah’s case, he argued that he left UMNO because it would no longer be possible to fight for Sabahan rights if he stayed in the party.

Meanwhile, just two days after Sabah UMNO had it’s mass resignation party, another six MPs got together to send a resignation letter signed by them to UMNO HQ. One of the six, Larut MP Hamzah Zainuddin cited the reason for leaving as a sort of protest against Zahid Hamidi, pointing out their displeasure at his direction as well as losing faith in him over the Zahid’s recent legal troubles. And last but not least, Bukit Gantang MP Abu Hussin Hafiz had quit UMNO back in June, voicing out his unhappiness with the infighting in UMNO.

We separated them from the four MPs who have already joined Harapan parties as these MPs are at time of writing independents, having quit UMNO but not officially joining any other party. That being said tho….

Some of them might not be independent for long

So yeah, while the thirteen MPs who left UMNO following GE14 are still independents on paper, it’s safe to say that the moment they quit, the rumour mill of them joining Harapan went into overdrive.

Going back to the mass Sabah exodus for example, just after they had announced their resignations, photos of the now ex-Sabah UMNO leaders with allegedly Bersatu application forms began spreading online. They didn’t even deny that the photos were fake, altho they did say that officially anyway they’re still independents laa. It would be kinda tricky tho for the former Sabah UMNO bois to join Bersatu – while they can be Bersatu members, the party doesn’t officially have a Sabahan division, plus it was agreed with Warisan that they would be staying out of the state too. Some of the former Sabah UMNO leaders with allegedly Bersatu application papers. Image from Malay Mail

Meanwhile, back in the peninsula, some of the MPs who left UMNO are also rumoured to be joining Bersatu soon. Tanah Merah MP Ikhmal Hisham for instance has already been apparently ‘invited’ by Education Minister Maszlee Malik to join Bersatu. According to Astro Awani, Maszlee is a strong admirer of him, especially regarding the Tanah Merah MP’s charity and educational work. On top of that, Rosol Wahid, the Hulu Terengganu MP who left UMNO together with Ikhmal, also voiced his intention to join Bersatu.

“I have to take sides, either with PAS at the state level or Pakatan Harapan at the federal level so I can continue helping the people. So, I’ve decided to join PPBM in the near future, that is if they are willing to accept me,” – Rosol Wahid, as quoted by Free Malaysia Today If only it was that simple.

Other than UMNO politicians in office, there are several big name former UMNO members who are also trying to join Bersatu but have yet to be given membership at time of writing. For example, just days after the GE14 victory, Jamaluddin Mohd Radzi – who in 2009 quit PKR while a Perak assemblyman, leading to the collapse of the Pakatan Rakyat Perak state govt – wasn’t allowed to join Bersatu due to his bad history. And then there’s also the case of UMNO-linked Red Shirts leader Ali Tinju had his application to join Bersatu rejected.

The latest in former UMNO leaders finding it difficult to join Bersatu would be Rahim Thamby Chik. The former Malacca CM is known for being involved in a bunch of scandals, from his alleged statutory rape charge that was dropped in 1994 to him showing journalists a sex tape allegedly involving Anwar Ibrahim. With so much baggage, it’s perhaps no wonder then that some are voicing their concern, such as DAP’s Kota Malacca MP Khoo Poay Tiong.

“It’s his right to quit Umno, but I strongly object to accepting him or his supporters as being part of the current government…. Admitting such a character into Pakatan would dampen our spirit as well as cause the grassroots to lose confidence in the current administration in the state,” – Khoo Poay Tiong,  Kota Malacca MP, as quoted by The Star 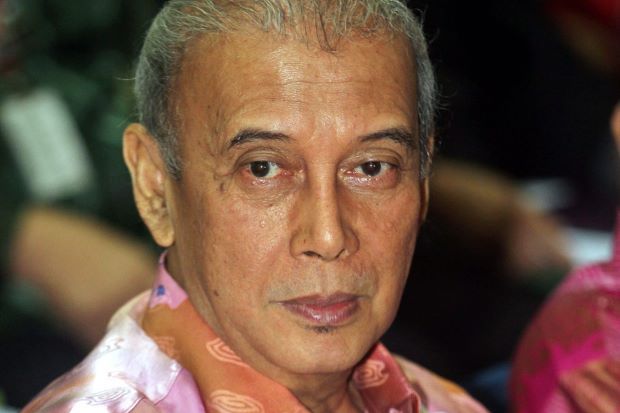 In any case, they wouldn’t be joining (or trying to) if they hadn’t quit UMNO. And a lot of those who left UMNO said it was cause of the bad leadership. So now, with Zahid saying he’ll step aside, how ah?

With Zahid (somewhat) gone, only time will tell if the UMNO exodus ends

Let’s try to get one thing clear here – while Zahid Hamidi’s tenure as president probably did upset many an UMNO member, he’s probably not the only reason why party members are leaving and joining Harapan parties instead. Even in May, just days following GE14, hundreds of UMNO members began submitting their applications to join Bersatu instead, and Zahid wouldn’t even be UMNO’s president until June.

That being said, a number of MPs and big names did leave with Zahid Hamidi as one of their main reasons. As such, with Zahid already halfway out of the UMNO president’s office (remember, he only step aside, not step down), it would be interesting to see if those who left cos of Zahid would come back if UMNO has a new leader. Politics, huh?

Share this article:
NAH, BACA:
Perikatan Nasional might break up soon. Here's what happened to the band.