A little over a year ago, a group of Barisan Nasional rejects, leavers, a retiree, and a fresh-faced 24-year-old formed a new political alliance called Parti Pribumi Bersatu Malaysia (PPBM) with a big bang.

Their goals? To “create a government that is clean, trustworthy, with integrity”, in party President Muhyiddin’s own words. They hope to reform institutions and rid the country of corruption. So future, much touching! At the time, many of our readers were angry (and even now, looking at the comments) – feeling that the last thing we needed was another racially-based party, which at least on paper, Pakatan hadn’t been before. However, one of its first supporters was surprisingly Lim Kit Siang, who heralded the new party as a “game-changer”, reaching out to nationalist Malays who didn’t support the current administration.

But one year on, it seems like they’re as quiet as mice. Why don’t we hear about them any more? Have they disbanded or what?

As with every other political party, PPBM has a target demographic that they need to identify, reach out to, and win over – usually being the group of people who vote for the other side. So let’s take a poll:

If you chose Singaporeans, what planet are you from?!?

They are actually targeting rural folk because urbanites don’t need to be converted.  Meanwhile BN is doing the opposite: “Najib has bagged the rural voters. The only remaining task is to woo the urbanites,” said Dr. Oh Ei Sun, principal adviser to Malaysia’s Pacific Research Centre.

Areas where even PAS cannot penetrate? That sounds like a challenge! And PPBM has their work cut out for them. When Wan Mohammad Khair-il Anwar Wan Ahmad (Umno-Kuala Kangsar) and Noriah Kasnon (Umno-Sungai Besar), were killed in a helicopter crash in Sebuyau, Sarawak, with these two seats being vacant, the voters still chose BN’s replacements (though to be fair, the elections was before PPBM’s formation): 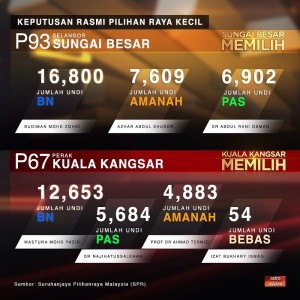 Summary of results from the two by-elections. Image from Astro Awani

The one stronghold PPBM is determined to win in the next elections is Kedah, said Muhyiddin! Locking onto their target, PPBM moved in on the rural areas.

They have been doing roadshows and ceramahs in the rural areas He’s watching us all with the eye of the tiger. Image from Malaysian Insight

We went through PPBM’s posts on Facebook to see what they’ve been up to. It seems they have been really busy bees these past months (we looked as far back as May this year), going to various places across the country, ie. Perak, Pahang, Penang, Kedah, Johor, Malacca, Selangor, and most recently Sarawak. It’s like they blitz campaigning before the next GE, which is expected to be called in 2018.

The candidates they are pushing are the 3Ms – Mahathir, Muhyiddin and Mukhriz – whom PPBM believes have a lot of influence over Malaysians living in the rural/suburban areas, and will help the party wrest seats in BN dominated rural regions. After all, Mahathir and Mukhriz are known as ‘anak Kedah’ in their home state and the latter was popular among the youth before he was forced to step down. Muhyiddin, the seven-term MP of Pagoh, similarly intends to keep his seat with his new party.

“The difference is Tan Sri Muhyiddin Yassin, Datuk Seri Mukhriz Mahathir and Tun Dr Mahathir Mohamad are well regarded among the rural communities and they have given back to the communities for a very, very long time. So I think in terms of community stature, these individuals are very well respected.” – Syed Saddiq, The Star Online The 3Ms (from left): Muhyiddin, Mahathir and Mukhriz. Image from The Malaysian Insight

For most of the events, the admin posted up digital flyers with details such as dates and locations. From what we gathered, looking at the dates, it appears that they have events about once or twice a week, especially during Puasa and Aidilfitri. There was once on the 20th of July, where the 3Ms attended TWO open houses in TWO different states IN A DAY. They went for the one at 12 noon in Kulim, Kedah, then an 8pm one in Penang.

They’ve been conducting ceramahs, roadshows, live talks, Aidilfitri open houses, buka puasa dinners, a fundraising dinner, and even random activities like a walkabout and surprise visit to a morning market in Bagan Serai, Perak. They also gave aid to flood victims in Kedah. Looking at the roster also, it does seem that all 3Ms are quite active and show up for most of PPBM’s events. Mahathir himself has been to about 11 of them in the past three months, while Muhyiddin covers a lot of Johor events. One particular ceramah series they have called the Selamat Malaysia, Selamat Rakyat (Semarak) roadshow, or Jelajah Semarak for short, has been held in so many areas nationwide, after kicking off on 14 April in Pasir Puteh in Kelantan, to a crowd of 15,000.

It’s been also held in Muar in Johor, Pasir Puteh in Kelantan, Kubang Pasu and Bandar Darulaman in Kedah, Kepala Batas in Penang, Temerloh and Felda Jengka in Pahang (Najib’s own home state), and even KL. The roadshows has also been their platform to introduce people to the one-year-old party.

During their talks, PPBM’s leaders aim to increase public awareness of alleged misappropriation of money by BN and about bringing the Najib administration down in the next elections. And of course, the recurring subject is…1MDB (hello darkness my old friend). They’re trying to help the rakyat understand the 1MDB scandal, Muhyiddin talked about how he was sacked because of speaking against it, the pink diamond and so on. Other recurring themes are GST and 2.6 billion ‘donation’.

Among the places PPBM has been visiting live the small town voters who are loyal to BN. In a previous article, our writer went on a road trip with DAP to ask them why they are still loyal to dacing. In spite of the scandals, the people don’t really know the details and how it affects them. Though maybe with the recent Felda scandal that this time affects rural folk themselves, it could be a game-changer, who knows.

Also, some of the folk get their news from mainstream media which tends to play up positive images of BN during elections. Next, they see the Opposition as having a lot of infighting. Never too old to fangirl. Pic for illustration purposes only

But more importantly, bread-and-butter issues matter more to them than scandals in the nation.

“Surveys have claimed that 1MDB is not important to kampung folk unlike cost of living issues.” – Tony Pua, DAP-Petaling Jaya Utara, The Malaysian Insight

In places like these especially, social media is not the key to winning votes. Here, a politician’s Likes, Hearts and Hahas do not translate to votes, DAP youth leader Dyana Sofya explained.

All that aside, the reality is people in rural and unsophisticated urban areas still want racial politics, Mahathir acknowledged.

The (r) ace up his sleeve. Images from yesmovies.to and Azhan.co

Racial politics is the practice of politicians exploiting the issue of race to forward an agenda. It has been used in many countries all over the world, and it’s still being used today (Trump’s wall). But before we go on, straight up, ALL SIDES of the political divide memang play the race card… except maybe PSM.

PPBM, whose full name contains the word ‘pribumi‘ which is another word for the bumiputera races, opens full membership to bumiputeras, while non-bumiputeras can be associate members. Bumiputeras include Malays, natives from Sabah, Sarawak and the Orang Asli group. Associate members are not allowed to vote or contest for party positions but can be appointed to key posts.

Critics have accused the party of racism. Despite sophisticated and “highly educated” urbanites’ belief that racial politics does not belong in modern times, here’s what PPBM had to say about this decision:

“For the rural people who largely are poor, race is not only important but they believe is essential for their well-being. Umno’s popularity is because it is a racial party. If the new party is to compete with Umno, it must give the people in the rural constituencies and the unsophisticated urban constituencies the kind of comfort associated with Umno’s kind of racism.” – Mahathir wrote on Chedet.cc, his blog Beat them at their own game?

In fact, the plan is for PPBM to get the rural Malay Muslim vote while Pakatan Harapan secures urban and suburban votes. In further response to critics, Syed Saddiq says his party is only providing a ‘middle-ground’ between a reform-based agenda, while allowing for those who want to remain intact with their racial identity.

“And there are still vast majorities of Malaysians, or Bumiputras, who still want to maintain their racial identity while keeping that progressive and modern stance of wanting to pursue the reform agenda.” – Syed Saddiq, Malay Mail Online

Race politics or not, the Opposition believes PPBM could be a game-changer Pulling out all the stops. Image from straitstimes.com

Race politics has already been so ingrained in our culture that it’s like the annoying stain that won’t go away even when you use bleach. However, Mahathir said a leadership change in BN was impossible and could not be revived: “With these developments the idea of a new party to contest against Umno became not only attractive but also absolutely necessary.”

But whatever your opinion on racial politics, and we’re not saying we support it too, it’s not hard to believe that they might be on to something.

Despite speaking against racial politics, the Opposition too is quite optimistic about working with PPBM. Lim Kit Siang, DAP-Gelang Patah said recently that the party could be a game changer if it wins a sizeable portion of Umno votes in the next GE, what with Parti Warisan Sabah (Warisan) helmed by former Umno Shafie Apdal, coming into their own and expressing support for them.

“I think we could really make a dramatic impact. Bersatu’s main role is to take the fight to the rural areas where UMNO is strongest. Bersatu president is former Malaysian Deputy Prime Minister Muhyiddin Yassin. He and Mahathir are very combative, very old school politicians with deep roots in the rural areas.” – Wong Chen, PKR-Kelana Jaya, CNBC

Share this article:
NAH, BACA:
Why is half of Penang's 2017 Budget going to Lim Guan Eng's office?!