Just as we thought that Europe is gonna leave us alone without the whole “palm oil is bad” mantra, we’re shaken out of the magnolias. Just two days ago, we came across an article by The Telegraph about the so-called “palm oil bergs” getting washed up on beaches in the UK (HK pun kena).

In response, councils put up warnings to dog walkers to not let their doggos lick these white (or orange) clumps of oil which smell like diesel because of how “deadly” it can be to them. These clumps allegedly come from ships which dump palm oil into the sea (and ship wrecks). [Though the council reportedly didn’t confirm if it’s actually palm oil.]

“We acted as soon as the reports came in of this white substance being washed up on Fistral Beach. Cornwall Council have been working with the site manager to ensure warning posters have been posted along the beach, as a precautionary measure​.” – a council spokesperson told The Independent. Apart from putting up warning signs, the Cornwall Council also urged the public to “wash off the substance using normal soap or shower gel and water and wash your clothes” if they touch it (but doesn’t soap contain palm oil?).

The beach in question, Fistral Beach, has reportedly said this in a post (which has been deleted, lol no wonder cannot find): “We have just been informed by the lifeguards that palm oil has been washing up on the beach. This can be very dangerous so please keep a close eye on your dogs when walking them on any beaches.” We also found other Facebook posts of a similar nature, some from as early as 2016 and 2014, which means that this is not the first time.

We’re so used to hearing anti-palm oil sentiments from that part of the world, that we can’t help but wonder… if the UK is finding another way to villainise palm oil and make Teresa Kok terasa again.

Well, palm oil itself is harmless, but dogs can still fall sick from eating the palm oil bergs

Before we get into the specifics of palm oil bergs, let us introduce you to something called a fat berg, a term coined by London sewage workers to combine the words ‘fat’ and ‘iceberg’. The term ‘fat bergs’ are usually used to describe lumps of congealed fat, made up of used cooking oil and other trash which have been poured down the pipes and combined into a rock hard substance that blocks sewers. Fat berg in the sewer.. Eeeww.. Image from Evening Standard.

The palm oil berg is something like the fat bergs, but, as we mentioned earlier, made of palm oil from ships and whatever dirty stuff it comes in contact with (which explains the earlier statement about washing it off with soap). Ships tend to wash their leftover palm oil into the water to save money on disposing it properly at an onshore disposal facility.

“Ships transport palm oil then have to pay to get their tanks cleaned. However, if they are at least 12 miles out and the sea is a certain depth they are legally allowed to flush out up to 100 litres into the sea per tank.” – a Seal and Shore Watch UK spokesperson said.

Although lab tests reportedly show that palm oil is non-toxic, our furry friends can still get sick from eating a piece of palm oil berg because of the contamination with toxic stuff like diesel. If they ate a small berg, they’d suffer from vomiting and diarrhoea, which would result in dehydration. If they ate a bigger berg, they might suffer from more serious issues like kidney damage, liver failure, gut blockages, pancreatitis and in some cases, death. :'( Dave, one of the poor dogs who passed away after eating a palm oil berg. Image from Daily Mail UK.

But such medical issues from eating palm oil bergs is uncommon, as one study quoted by Vets Now claimed. In this study of 60 dogs who ate these things, less than half of them had such symptoms and only two poor doggies had more serious issues. Pawsitive news is they all reportedly recovered and there’s no pwoof that ingesting palm oil can be pretty ruff for dogs.

NAH, BACA:
Bomba wants to use dog in Northern Region. But isn't it haram?

But that doesn’t mean that the authorities can turn their butts on this, since palm oil dumps/spills into the sea can be just as damaging to the ecosystem as any other water pollution.

Yeah, they’re gonna do something about it… 2 years later

In February 2018, the International Maritime Organisation (IMO) approved regulation requiring ships carrying palm oil and other food oils to pump the tank residue into purpose-built disposal facilities, instead of washing it out in open water. 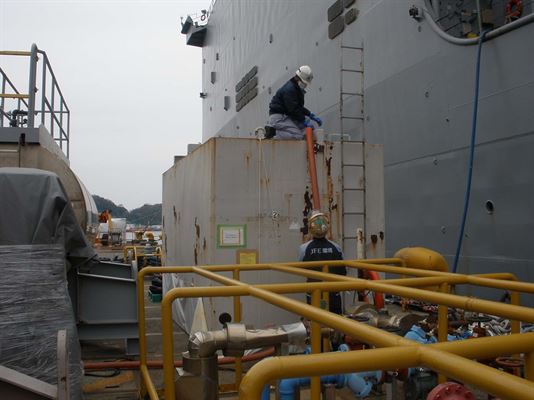 A disposal facility in Japan. Image from US Defense Logistics Agency.

But the new regulation will only start on 1st July 2021 to give everyone time to increase capacity at these facilities, so until then, the ships are allowed to continue dumping palm oil. This move attracted criticism, arguing that the UK already has the infrastructure to deal with oil residue and should therefore ban the oil dumping before the 2021 deadline.

“UK ports have oily water reception facilities that were put in place to process crude oil waste. This legislation is already long overdue… The UK, and Europe more generally, is in a position where it could implement this legislation immediately.” – said Paul Johnston, researcher at the University of Exeter and principal scientist at Greenpeace’s research labs.

Meanwhile, the British Maritime and Coastguard Agency said it is now thinking of making a regional deal to crack down on this dumping issue.

But what may be missing from the discussion is what to do with the palm oil bergs. The UK is already working on using those gross fat bergs found in the sewers (and used cooking oil) to fuel power plants. Looking at what’s being done with the sewer fat bergs, one thing to consider for palm oil bergs is its use in generating energy. In fact, this bio-fuel idea is already in progress in Malaysia (which we’ve written about previously). Whether they think of turning this “destructive thing” into “something useful” remains to be seen but, hopefully, in 2 years, we’ll hear less howling about palm oil in that angmoh country.