If you drive a vehicle that uses diesel, you might be interested to know that Malaysia recently switched to a greener form of it. Recently, the Prime Minister Tun Dr Mahathir Mohamad had launched something called the B10 Biodiesel Programme, which will see a new blend of diesel being sold nationwide starting February next year.

Among other benefits, the B10 programme is expected to reduce the emission of carbon dioxide from all diesel vehicles in the country by 10% per year.

“The air quality, especially in the urban areas, will also increase through the use of biodiesel with the reduced emission of dust and black smoke into the air. The implementation of the B10 Programme is apt at this time in view of the lower price of palm oil biodiesel compared to petroleum diesel,” – Tun M, as reported by The Edge Markets.

If got left over, can fry chicken lo. Gif from Wanista.

Not quite, but for the record you can actually use cooking oil in diesel engines, but you have to modify your car so that it heats it up the oil first to thin it out a bit. When you use cooking oil this way, the oil is usually called Straight Vegetable Oil (SVO), and the first biodiesel was said to be an SVO. The one we’re switching to, the B10, contains a slightly modified form of palm oil called palm methyl esters, but we’ll get back to that later. First, a story.

Back in the 1890s, an inventor called Rudolf Diesel pondered about the low efficiency of petrol engines. When a petrol engine burns petrol, only 25 to 50% of the energy created is used for actual work (making the car move), while the rest got converted into useless heat. To solve that problem, Diesel created a different kind of engine, and his creation turned out to be about 15 to 25% more efficient, making it great for bigger vehicles like trucks and buses. However, its operation creates more pollution in the form of soot, and it’s a bit noisier lah.

Woe be the day when this shows up at the empty lot near your apartment. Img from FMC Middleport.

When his first working model was exhibited at an exhibition in France in 1900, the French government at that time wanted to test the power-generating ability of peanuts (which was a main crop in their African colonies), so they requested Diesel to power up his engine using pure peanut oil. Although Diesel had designed his engine to be used with a mineral oil, the engine worked so well with peanut oil that few people noticed that it was running. This is said to be the first instance of biodiesel, and the date that this happened (18th March) is now celebrated annually as World Biodiesel Day.

Since then, other countries have explored the use of biodiesels, and for Malaysia, the story started sometime in the 1980s… Back in the 1980s, the government realized that fossil fuels won’t last forever, and we have a lot of oil palms. So they started researching on ways to use palm oil to fuel stuff. We got considerably more committed with it in 2005, when the National Biofuel Policy was formulated, and among other things the policy spells out what we hope to achieve from all this biofuel stuff, and they are:

In 2006 (aka Pak Lah’s time), we finally rolled out our first biodiesel, called the Envo Diesel. It was basically 1 part refined palm oil blended into 19 parts petroleum diesel (remember the SVO earlier), and it was only used in some government vehicles at the time with no reported problems. It was planned to be used for public consumption, but the public never got to use it due to some problems. 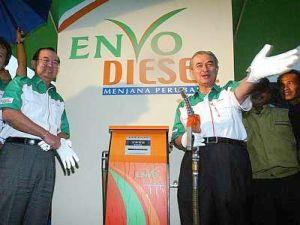 Pak Lah launching the Envo Diesel in 2006. Img from The Star.

For one thing, several manufacturers of diesel vehicles were concerned that using palm oil in their vehicles might cause problems like filter plugging, corrosion of the fuel system and generally using palm oil in a vehicle that’s not designed for palm oil. Also, there’s the problem of the fuel solidifying at lower temperatures, so it’s gonna be a problem driving up to Cameron Highlands. Due to these issues, the diesel engine manufacturers basically said that if you use Envo Diesel, your warranty is void.

So the government withdrew Envo Diesel and went back to the drawing board. Two years later, they rolled out their new idea: instead of just blending vegetable oil into diesel, they put the oil through a process called transesterification and came up with something called palm methyl ester, which can be blended into diesel to make a better biodiesel. This resulted in a biodiesel blend called B5, where 5 stands for the percentage of palm methyl ester in the blend (5% biodiesel, 95% petroleum diesel).

NAH, BACA:
To save our palm oil, Malaysia is teaming up with... the country that brings us HAZE?!

And the number following ‘B’ has gone up since then… Mandates mean that the government makes it mandatory to use such and such a blend. Img from Paul Tan.

Starting 2014, the B5 blend was sold nationwide, and one year later the government replaced it with B7, which as you might guessed, contains 7% of dat palm methyl ester. We’ve recently increased the amount to 10% (B10), and during its launch Tun M came up with a challenge to catch up with Indonesia, who had been using B20 biodiesel since 2016. While Indonesia seem to be using the highest blend as of now, we’re not the only countries that are using biodiesels: Colombia and Argentina are currently using B10, Brazil and France are using B8, and some states in the US are using up to B10.

Anyway, you might have noticed a 3-year gap between B7 and B10. Within the past three years, the roll-out for B10 had been planned and postponed almost every year, and the reason seem to be the gap between the price of palm oil and petroleum. Lately, palm oil had been more expensive than diesel, so if we mix expensive biodiesel with cheaper petroleum diesel, the overall price will go up.

But that might not be the only reason for the delay. There was doubt within the industry when it comes to B10. The Malaysian Automobile Association (MAA) had claimed that if you go any higher than B7, the palm methyl esters will mix with motor oil, causing it to thin out and cause sludging in the engine. They also mention a host of other issues that might arise from using too much palm methyl ester biodiesel, including its tendency to precipitate at low temperatures. Different blends of biodiesel displayed during a B20 roadshow in Bandung, Indonesia. Img from Kompas Otomotif.

As such, they have stated that vehicle manufacturers recommend another type of biodiesel for blends higher than B7, something called Hydrotreated Vegetable Oil (HVO), which offers a few advantages over palm methyl ester such as reduced NOx emissions (generic term for nitrogen-based air pollutants), better storage stability and better cold properties.

While Mercedes Benz Malaysia had stated that its diesel vehicles are compatible with B10, many other car manufacturers as well as diesel fuel injection equipment manufacturers were iffy to cross the B7 threshold. And while Tun M had been cordial enough about the launch of B10, he did call for the government to ensure that only diesel vehicles that can accept more than 10% biodiesel should be sold in Malaysia in the future. Which brings us to the question… Just to make things clear, we can’t tell you that. The best thing to do is to call your vehicle manufacturer and ask. But we can tell you that the experiments done by the government had been successful so far.

The Kuala Lumpur City Hall (DBKL) had been one of the first third-party consumers of B10 since 2014, and within the past three-and-a-half years their medley of 50 vehicles using B10 had clocked in more than 3 million kms without a single case of fuel-related breakdown, with an average of more than 60,000 kms traveled by each vehicle. They’ve reported considerably less smoke and negligible difference in performance, and are considering extending the use of B10 to their entire 2,040 vehicle fleet.

“The use of B10 also registered minimal fuel savings. We normally consume about 11 litres per hour, but with B10 that consumption was reduced to 10 litres per hour. What is visibly obvious is the reduced smoke emissions when the machine is in use,” – Hamdan Main, a DBKL excavator driver, as reported by PaulTan.

The Malaysian Palm Oil Board (MPOB) have also cited various tests being done on palm methyl ester-based biodiesel blends over several years by various organizations like itself, the Malaysian Biodiesel Association: Colombia (MBA), the Japan Auto Oil Programme (JATOP), and the Japan Automobile Manufacturers Association (JAMA). The blends tested ranges from B0 (no biodiesel) up to B100 (pure biodiesel), and all of them found little to no fuel filter plugging or injector deposits. However, they did find issues related to material deterioration, like peeling paint and coatings, hardened hoses and some erosion, so maybe some parts and coatings need to be upgraded before using higher blends. As for the cold in the highlands, previous planned launches mention skipping over locations like Genting, Cameron and Kundasang, keeping the diesel there at B7, but we’re not sure if the new launch will keep that intention. However, the Malaysian Biodiesel Association had said that B10 may only plug your vehicle’s filter at temperatures below 12°C, which is the lowest recorded temperature on Cameron Highlands, so unless a freak weather condition happened it should be fine anyways.

So we guess it’s kinda safe to use, but if you’re worried about warranties and stuff or are using a very rare kind of diesel vehicle, you should still contact your manufacturer.