Have you ever just been in a hospital or clinic and want to drop kick the first nurse you see? Or just chokeslam a doctor?

Practicing your wrestling moves on a doctor may sound weird, but others will find this scenario like, oh my god soooo #relatable, according to a recent report. Datuk Dr Noor Hisham Abdullah, our Health Director-General, had reported that there had been 162 cases of aggression against the Ministry of Health’s (MOH) staff last year, which was a quantum leap from the previous 44 cases… spread out over the last three years (2013-2015).

“Last year, there were 64 cases of aggression against medical officers, 60 against nurses and 17 against medical assistants. Selangor recorded the highest number of cases at 43, followed by Terengganu and Sarawak with 16 cases each,” – Datuk Dr Noor Hisham Abdullah, for the Sun Daily.

If your bewildered self was saying what at these numbers, it’s true. It’s d*mn true. While we don’t know whether folding chairs or corny catchphrases were involved, aggression towards medical staff has indeed been on the rise, and that’s the bottom line, because Noor Hisham said so. If you smelllll something fishy with the data, bear in mind that…

… ‘aggression’ can mean more than roundhouse kicks to the jaw 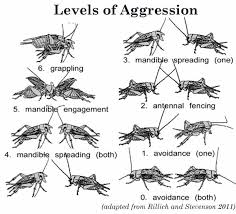 Pro tip: When your patient takes out his mandibles, just run. Img from Scientific American.

After the MOH realized that they had a problem, they released a set of guidelines last year to help their staff handle cases of aggression towards them. Since aggression can come in many forms, the guidelines specifically defined aggression as:

“Any sort of behavior that involves an attack either physically, verbally (threats), sexually or in writing with the intention to hurt, maim or cause psychological damage to the victim.” – translated from the MOH guideline.

So aggression in this case isn’t limited to just literally hitting the staff, but also things you wouldn’t normally call aggression, like… flipping them the bird, kicking furniture to scare them, saying mean and hurtful things, and even taking their pictures and posting them on social media with slanderous captions. 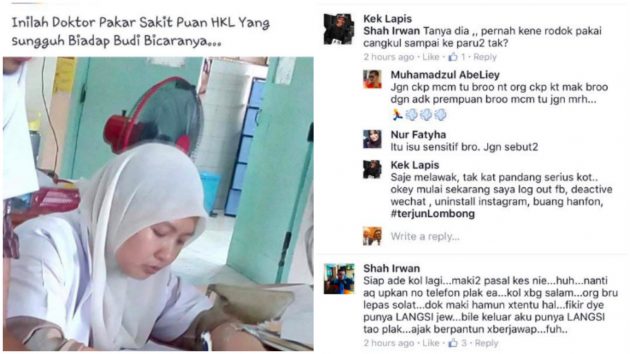 Like this case back in 2016 when a gynecologist was harassed online by a patient. Full story at OhBulan!.

While we couldn’t find the local version of the statistics, the US’s Occupational Safety and Health Administration (OSHA) reported that healthcare workers have the highest risk of being a victim. Between 2000 and 2013, they found that serious violence towards healthcare providers (where victims had to take days off because of injury) were four times more common than the average of any other private industries, including retail and construction.

So yeah, besides dealing with disease and unsightly bodily fluids, nurses and doctors also have to look out for  a n g e r y  patients as well. Which brings us to the question…

Why are these patients so angry and aggressive? Putting this stock image here because why not. Img from Scrubs Magazine.

Since healthcare workers have such a high risk of getting the Boston crab performed on them, plenty of studies have been done. The first thing to get straight is that besides getting crap from the patients and their families, healthcare workers may also be abused by their colleagues (and superiors) as well, although this form of internal abuse is less common.

To give a rough idea of the extent of abuse, a review by the Cochrane Work Group had put patients as the main source of violence (10% – 95% of respondents), followed by the patient’s advocates, or family and friends (20% – 50%), and colleagues as the lowest (3% – 40%). They had also put healthcare workers as one of the groups with the highest risk of experiencing workplace aggression, second only to those working in the protection and security services. As for why, they theorized that healthcare workers work with people under distressing circumstances, so maybe it’s hard to be rational with a broken leg. A doctor who spoke to the Malaysian Digest, however, cited the issuance of medical certificates (MCs) as a reason for patients to turn violent. She explained that MC seekers clog up non-critical zones in hospitals and clinics, and this slows down the service for everyone else.

But MC seekers aren’t the only cause. She also revealed that violence from the patients or their advocates can be unpredictable, as she was once heavily berated for asking whether a patient had kidney problems or is a drug user as he had fragile veins. While she had her picture taken by angry patients before, things can get worse.

“A lot of my friends received death threats. There were even those who brought a machete to the hospital, forcing us to call the police and security, which is a good reason why we have to know the police. Now, we mostly get verbal abuse, and less of physical abuse. That being said, if I receive a death threat, I will make a police report and ask to be transferred for my own safety,” – Nur Athirah, doctor, for the Malaysian Digest.

A study by the University of Central Lancashire, on the other hand, discovered while patients and nurses disagree on the causes for patient aggression (the patients said that poor communication is a main source, while nurses blame the patients’ mental illnesses), both sides agree that poor environmental conditions is a factor that may cause patients to go berserk, specifically the condition of the health facility. 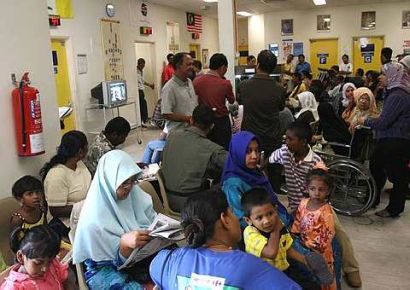 Crowded waiting rooms come to mind. Img from The Star.

So yeah, from these sources we can assume that patients may violent for a number of reasons, but the underlying reason may just be that sick and injured people are just not as rational and patient as healthy people, and long waiting times and low perceived quality of service will set them off. With that being said…

The Ministry of Health is taking action, by educating the staff and the public Datuk Dr Noor Hisham (with the yellow paper) after launching a relevant module last month. Img from the Sun Daily.

The issue has been under the spotlight since before 2013, when the MOH finally decided to collect data from 11 of its hospital for two years and came up with the 44 cases we mentioned earlier. Since then, they have planned to put signs at their facilities that warn the public to not threaten or abuse the staff during treatment and while seeking it, and Dr Noor Hisham had threatened legal action under the Minor Offences Act 1955 against anyone who misbehaves.

“The notice sign serves as a reminder to all members of the public of the importance of proper behavior, good moral values and respect for the rules at all times when they are in any MOH facilities, besides also reminding that legal action can be taken towards any client or patient who behaves violently towards any MOH staff,” – Dr Noor Hisham, as reported by MIMS Today.

In addition to the signs, last year a set of guidelines were published to provide the staff with relevant information on what to do if they are abused, including relevant legislations, the duty of everyone involved in the case of an incident, how to avoid being roughed up by the patients (by being nicer and more responsible), further plans to increase safety at work, and how to detect potentially aggressive patients using the ‘STAMP’ acronym, among other things. Screengrabbed from the MOH guideline.

A running theme in the guideline is notifying the authorities of the incidents, which is perhaps why…

From an average of about 15 cases of aggression a year to 162 cases last year may seem like a surprising jump at first glance, but not so, if you know the trends. According to Cochrane, a problem with workplace violence in healthcare settings is the poor reporting practices in most institutions. In a lot of cases, the statistics depend on the staff reporting the incident voluntarily, but most of the time the staff themselves aren’t sure what form of aggression are serious enough to be reported. 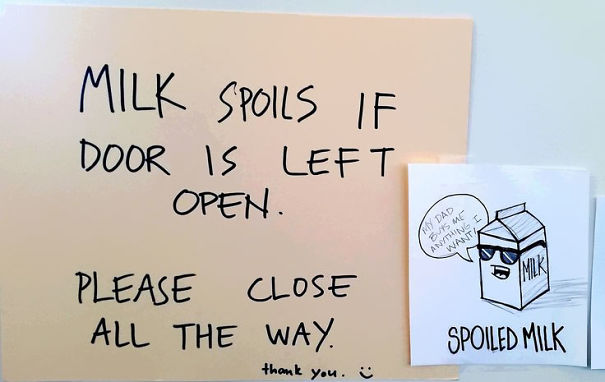 Can you report passive-aggressive notes? Img from WorldWideInterweb.

Some staff and employers may already accept that aggression towards nurses and doctors are just part of the job, so there’s no real need to report every little thing that happens. Other cases suggest that there is no culture of reporting in some places, and in others not enough support for the reports to get through. The guidelines published by the Ministry of Health kind of addresses this problem by educating the staff on what’s worth reporting and how to do it in detail.

So the huge jump in cases in the year after the guidelines are published may just be because the staff now knows what they can do about it, which means that the Ministry’s move had been a success.

However, at the same time it also highlighted a problem with the way we treat our health professionals. Some may argue that the health care workers getting harassed may deserve what they get for being so slow/insensitive/negligent or what not, but perhaps it won’t hurt to be a little more patient when being a patient.