This article was originally published on 16th Jan 2018.

[UPDATE (18th March 2019): Recently, the European Commission’s Delegated Act classified palm oil as “high risk”, according to a media statement from our Ministry of Foreign Affairs. The ministry called this move by the EU flawed, unacceptable, discriminatory and protectionist to restrict palm oil in the European markets. The media statement also mentioned that less competitive and less efficient oilseeds are classified as “low risk”, hence the suspicion of discrimination against our palm oil exports. If the Delegated Act is passed, Malaysia will go to the World Trade Organisation (WTO) for help.]

UPDATE 21/1/2018: EU ban on palm oil as biofuel could affect the livelihoods of 650,000 smallholders and over 3.2 million Malaysians in the industry. This ban is proposed due to environmental concerns, as palm oil plantations are often associated with deforestation.  Malaysia has criticized this move, calling it a protectionist trade barrier and a form of “crop apartheid”.

By now you’ve probably heard enough about ‘initiatives‘ and ‘pledges‘ for the environment to roll your eyes until they become lukluk fishballs, but as we found out more on the trip, one thing became clear. 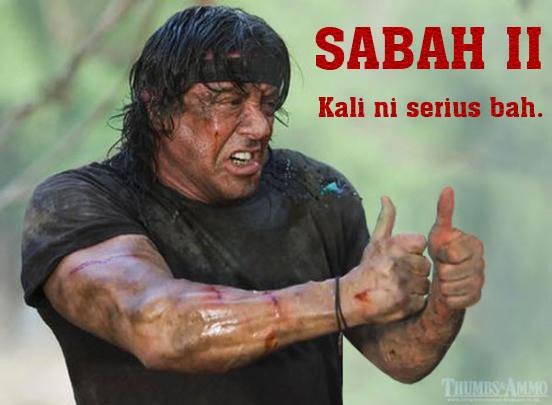 This time, THEY MEAN BIZNIZ. Original image from Thumbs and Ammo.

There’s an operation being done in Sabah, headed by Datuk Sam Mannan, Chief Conservator of Forests from the Sabah Forestry Department. And he’s a WWF award winner (the wildlife one, not the wrestling one).

“We are in some ways, in a desperate situation. Desperate in a sense that if we don’t come up with something viable and acceptable to society, the pressure on the rainforest and the land that we have set aside for reserves would be decreasing and we are going to lose a lot of it.” – Datuk Sam Mannan, speaking about conservation in Sabah.

He played a key role in driving Sabah to sign a first-of-its-kind deal to be the first entire STATE that entirely commits to sustainable palm oil practices. Again, we’re sure you’ve heard about these sort of deals before, but this one has one key difference…

It might actually make Sabah’s palm oil stand out from the rest of the world! Palm oil is one of Malaysia’s top exports – Sabah alone produces 10% of the world’s entire supply (!). And for good reason too – palm oil lasts longer than other vegetable oils, and has the highest yield per hectare of any natural resource. Despite that, palm oil has been getting a pretty bad rep, due to concerns about how palm oil causes the haze, and affects wildlife habitat. And yes, a lot of those concerns are unfortunately true 🙁

That’s where our friends at the Roundtable for Sustainable Palm Oil (RSPO) come in – they’re an organisation founded in 2004 with the purpose of transforming the palm oil industry to be more sustainable. We’ve previously written about them here, here and here (and only the last one and this article are sponsored). Here’s a quick breakdown of what they’re trying to improve about palm oil production:

And you know they’re legit because but they’ve got more than 3,500 member organisations, who all know that consumers are starting to care about where their products come from.

On top of that, major brands like Unilever (the guys behind your yummy Lipton tea, Cornetto, Magnum etc) have more than 90% of their palm oil supply sourced from sustainable producers, even boycotting a large palm oil supplier when their RSPO certification was under question.

So the way the RSPO usually works is that they’ll certify a particular oil palm supplier (plantations or mills) – from the smallest pekebun in Perak, all the way up to the biggest oil palm suppliers in the world – ensuring that they adhere to varying degrees of sustainable palm oil production. They also offer certifications to end products like Lipton, when their supply chain is RSPO certified.

But this is the first time they’re attempting to certify an entire state! 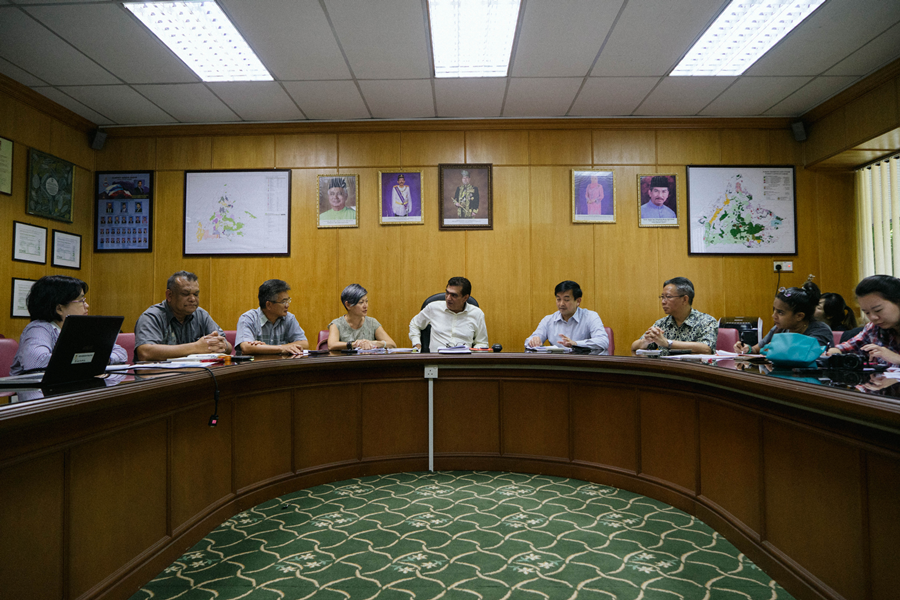 Datuk Sam Mannan, Chief Conservator of Forests, Sabah Forestry Department in the middle and Cynthia Ong, Board Chair and Chief Executive Facilitator, Forever Sabah, on his left of the picture. Photo taken during the media conference.

So back to the event that we were invited to – jointly organised by the RSPO and Sabah Forestry Department, to let journalists know about an ongoing effort to certify the entire state of Sabah as a sustainable palm oil supplier! This state-level RSPO certification is also known as the Jurisdictional Approach.

So, other than the importance of conserving the forest, why is the jurisdictional approach so important to Sabah? Datuk Sam Mannan is brutally honest during the media conference:

“The real reason, from my personal point of view, is because of survival. We are small, (approximately) 1.6 million hectares… So why should people come to Sabah to buy our palm? They can go to Africa, they can go to South America… We cannot compete with Indonesia on prices, and perhaps not even Sarawak.

So, why come to Sabah? What’s the extra bit? Price-wise we lose, probably cost-wise we lose… It is the jurisdictional thing. They come to Sabah because of the brand. Because it is of good quality, (we) look after the environment, good governance and so on.” – Datuk Sam Mannan, during our media conference in Sandakan.

Like we said earlier… this time it’s serious. If successful, Sabah could be the world’s first RSPO-certified state by 2025, possibly encouraging other governments to ikut! Between 2016 (when the agreement was first signed) and 2020, the Sabah government is budgeting over US$1billion to achieve a very ambitious goal – ZERO DEFORESTATION.

Why is this ambitious? Well, it’s already a long process for a small plantation to get RSPO certification as they require a lot of criteria to fulfill. So to certify an entire state, RSPO needs to be confident that the majority of Sabah’s palm oil supply chain is sustainably sourced. If successful, it would make things better in the long run because once jurisdictional certification is achieved – as long as the palm oil comes from Sabah, it will be RSPO certified. This will ensure that companies like Unilever that want to buy only sustainable palm oil can now buy any palm oil produced by the state of Sabah! To achieve this, there’s a three-step process. But that’s just one of THREE goals that Sabah is aiming for. On top of that, they plan to solve two other major problems plaguing the palm oil industry

According to Cynthia Ong, the Chief Executive Facilitator of Forever Sabah, some of the smallholders are only yielding 20% of their crop due to inefficiency. This is how RSPO practices can benefit them in the long run.

Wild Asia, a Malaysian-based social enterprise, plays a big role in getting these smallholders together and getting them certified as group. We managed to interview one of the small farmers, Titi Bonsilon, on how RSPO practices has increased his productivity and produces:

“I don’t know much back then. I used to do blanket spraying on this area, killing all the shrubs. After RSPO, I managed to reduce the use of chemical.

In terms of productivity, it has (also) been increased. Back then (before RSPO), the most I can get is 6 to 7 tonnes. Last month, I got 20 tonnes.” – Titi Bonsilon, in an interview with CILISOS.

Among many things, RSPO certification also requires fait treatment towards the workers. To pursue this, Wilmar (one of the big mills) have started a lot of initiatives such as providing free housing, education for the kids, and even…

Right down to giving back the passports of migrant workers

During the media trip, we were also taken to one of the palm oil mills of Wilmar, which is one of the world’s largest producers of palm oil, and Sabah’s largest producer. They’re part of a newly introduced initiative to not just improve their harvesting practices, but also their labour practices. The RSPO Labour Rights Task Force wants to improve working conditions from fair labour practices, all the way down to safety standards at oil mills. Out of the 428,000 workers the palm oil industry uses, more than 70% are foreign workers, and one of the common practices in Malaysia is to keep the worker’s passports to ensure they don’t leave unexpectedly. As shocking as this is, some of you might have heard of similar practices for security guards and domestic workers. Despite being clearly illegal in Malaysia, the practice is still very common.

In line with RSPO’s new initiative to improve labour practices in 2017, Wilmar has, over the past year, introduced passport lockers with workers holding the keys. This overcomes the issue of them losing their passports, and yet allows them freedom of taking their passports whenever they wish, merely keying into a logbook when they choose to take them.

One worker from the Sapi Plantation said that when her family needed assistance in Indonesia, she was able to rush back home, without having to go through a lengthy procedure to obtain her passport. – Wilmar sustainability brief According to the Centre for International Forestry Research (Cifor), palm plantation industries have been the principal driver of deforestation in Sabah and Sarawak over the last four decades. In that time, East Malaysia has lost about one-third of its total forests. With deforestation likely to increase rather than decrease without intervention, Sabah’s ambitious goals with the RSPO are urgently needed.

And that’s why I think (Sabah’s jurisdictional approach) is critical. Because as demand is doubled in the next 20 years, where would we be? Will we double our land under oil palm? We will all be living in a plantation.”  – Cynthia Ong, Board Chair and Chief Executive Facilitator of Forever Sabah, in the media conference during our Sandakan trip.

Fortunately, consumers are asking for better practices, and for perhaps the first time in history, being environmentally friendly might actually make good business sense. OMG UGAIZ, if you believe the same, then maybe y’all might wanna look at where your ice-cream’s palm oil is being sourced from as well!