A few days back, we had a conversation with a guy who told us about this Kosmo article about a man named Mohd Hadi Hamzah, 36, who was sentenced to 2 years in jail and fined RM5,000 by a Magistrate Court in Kota Bharu. His crime? Stealing RM2 out of Masjid Muhammadi Jalan Sultanah Zainab’s donation box.

So why should you never steal from a mosque? Is the punishment any worse than stealing from other places? Well, the Penal Code applies to everyone wherever they steal from, but simply based on the theft cases in Malaysia, you should seriously not ever think of stealing from a mosque. 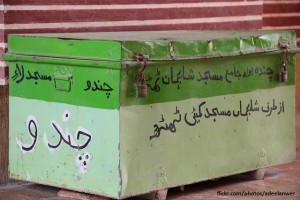 Just look at 2 other cases here: Sinar Harian reported that Hafizuddin [email protected], 23, was sentenced to 10 years in prison for stealing RM1! And that’s half of what Hadi stole. The third case is even sadder. Mohamed Shah Reza Fauzi who was caught stealing from Masjid Al Azim in Ampang was beaten to death by 4 guys in the mosque itself. The reports didn’t say how much he stole. True, it wasn’t the law that punished him, it was the public who took matters into their own hands. But mind the consequence here – he was killed for it.

Whereas in other cases a thief was sentenced to 20 months in prison for snatching someone’s handbag, causing the victim an estimated loss of RM3,500, another guy got 6 years while his accomplice was sentence to only 6 months in jail, but they stole RM1,000 and caused the death of the victim! And then 2 policemen got 10 years for robbing different women. The total amount they stole was RM1,250 cash, 3 mobile phones, a printer, a SIM card and four 4D tickets.

So what happens when a person steals? CILISOS turned to its good friend, ponytail lawyer Fahri Azzat to find out. The definition of theft can be found in Section 378 of the Penal Code (PC). But to cut the long story short, Fahri told CILISOS that basically these 3 things prove theft: 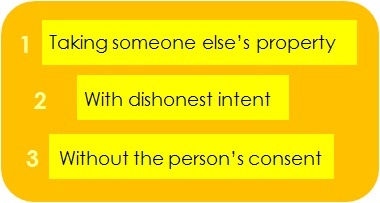 So if consent is expressed or implied, then it’s considered not stealing. Which means if it went down like that…

Dude B: Mmmfffpmhh k. Go away.

Dude A: Bro, were you even listening? Whatever, I’m going to take it. Don’t go calling the cops on me when you can’t find it. Illustration 1.0

…then it’s NOT theft because Macha 2 expressly said that it was “mmmfffpmhh k”.

With the definition covered, let’s move on to the punishment for theft.

These guys stole like RM1, RM2 – what about RM2 million? The target of the crime. Image from CILISOS.

So why did Hadi end up with a 2-year jail term and a RM5,000 fine for stealing RM2, while Hafizuddin got 10 years for a smaller prize? How is the punishment scaled based on the value of the item stolen? What about a thief who took say, RM2 million?

Except there’s no punishment scale in Malaysia, according to our lawyer friend.

“Each case is decided on its own. We don’t have an official sentencing policy guideline like in England and America. In the US, there is almost no discretion to the judge because they have a manual on sentencing that the judges have to follow.” – Fahri Azzat

Fahri told us that according to the Penal Code, the maximum sentence for theft is 7 years in jail or RM10,000 fine. Or both, just like in Hadi’s case. 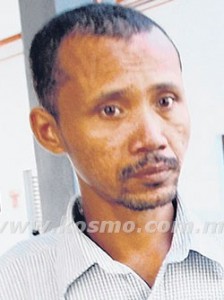 “The judge has the discretion on a sentence, but it’s a judicial one. This means that even though he can decide as he likes, he’s still constrained by precedent (how other judges decided in past cases), as well as the mitigating factors.”

Mitigating factors are factors that the court can consider to lower a sentence. Sort of like kesian points. For example, if the complainant wasn’t hurt, or the accused returned the money, or the accused pleaded guilty, etc.

Oh OK now we see how the 2 cases differ. See, Hadi pleaded guilty. Hafizuddin on the other hand denied it. He told the court that he was actually putting money INTO the box. His story made the magistrate smile. So bottom line is, we’re all at the ‘mercy’ of judges, who can decide on a sentence of anything – ranging from a binding over (a bond of good behaviour and no jail time), to 1 day imprisonment, to a max 7 years. Huh. Interesting.

Now what about the one who was beaten to death? What kind of punishment is that? Technically it wasn’t a legit court sentence, it was ‘public justice’. Technically, we shouldn’t even use the word ‘justice’ for it. Sorry about the technical error…. Then what now? Those 4 men killed him right? Yes. Yes, they did. We learned that they were arrested for murder (Section 302), but 3 were then let off and given 1 years 6 months in jail instead. The report did not say why.

That’s a whole ‘nother crime so maybe we won’t go too much into it. But basically, it was ‘public TECHNICAL ERROR justice’ at its ugliest. The action was condemned by Puteri UMNO Perak’s representive, Farina Mohd Bali and others. In Astro Awani’s report, ACP Amiruddin Jamaluddin, Ampang Jaya Police Chief told the public to call the cops in on theft cases – not take matters into their own hands.

Got pity bonus in punishment or not?

As in, can accused parties plead to reduce their sentences?

“Yes, they can. Pleading guilty is a mitigating factor because you save the court, witnesses, prosecution and public, time, expenses and effort. There is a general rule of thumb that a discount of 1/3rd off the maximum sentence is given when someone pleads guilty. But this is not a hard and fast rule and it is not automatic either,” explained Fahri.

‘Splains why Hadi got 2 years for RM2 and Hafizuddin, 10 years for RM1, as mentioned before. And what about possibility of parole for a theft crime?

But we really have to ask, how the heck is Hadi gonna be able to pay the fine? He was unemployed in the first place. And now that he’s behind bars, he’s obviously not gonna get an income. Summore if he fails to pay the fine, he’ll be serving an additional 6 months in jail! Sounds like he’s caught in a nightmarish Catch-22 situation. Isn’t the court concerned about where he’s gonna find the money?

“Absolutely right. The court is not interested in that. But sensibly, based on those facts, imposing a fine for someone accused of theft is a rather silly sentence. He stole – which strongly suggests he didn’t have money to begin with!” – Fahri Azzat

Sucks. But are there any bad punishments out there (aside from what happened to Mohamed Shah Reza Fauzi)? Ho yesss! One of the worst… no, definitely THE WORST punishment at the moment (unless there’s another, so much worse that it’s kept from public knowledge), is amputating the limbs of a thief under hudud law – which by the way, is coming to a Syariah court near you!

Now why does that sound familiar? Oh thaaat’s right, Aladdin! Remember the scene where Jasmine ‘stole’ an apple?

Since there’s no punishment scale, how did the judges come up with 2 years imprisonment + RM5,000 fine or 10 years? We just want to know WHY so serious. In our law expert’s opinion:

1. The harsher the punishment, the more afraid the perp will be.

“These fellas think that the only way to enforce the law is harshly. To them, the more severely you punish someone, the likelihood of a repeat offence is lowered. But there are studies that show that increased severity of punishment does not result in less of the offence being committed,” Fahri told us.

2. The harsher the punishment, the more afraid others will be.

“Another thing the prosecutors and judiciary think similarly is the notion that if they punish the crap out of the fella in THIS case, it will serve as a warning and reminder to ALL THE OTHER cases. This is why if you sit in court, you will find the prosecution often asking for harsh sentences to serve as a ‘deterrent’ and an ‘example’ – as if the regular criminals check the sentences meted out before they commit their crime!” added Fahri. Meanwhile in an alternate universe (read, Disney movie set in medieval England where animals can talk), it’s the authorities who steal money out of a Church’s donation box. Oh medieval times.

Oh, medieval times. But speaking of church / mosque money being meant for the poor. Fahri told us to consider this:

“I find the offence itself rather curious. From a classical perspective – a Muslim cannot ‘steal’ from a mosque because the mosque’s money is for all Muslims – particularly those who need it. You cannot steal money that is meant for you, so to speak,” mused Fahri.

That was all the information we could find on this case, but if you guys know something else tell us about it. There you have it – a lesson in Malaysian law on theft. Do you need a Panadol now?

“If you try to make sense and find some logic with the sentences being meted out in court, I beg you not to. It will hurt your head, confound you and leave you no wiser for your attempt.” – Fahri Azzat