There has been urm…trouble in paradise. Pakatan paradise. In the past few months, the news about  Parti Islam Se-Malaysia (PAS) leaving the opposition alliance has been intensifying.

Recently Lim Kit Siang said that “Pakatan may die in 2 weeks”. MalaysiaKini states that he seemed to be referring to the upcoming PAS party polls. He went on to say that a unity government between PAS and UMNO was in the works after initially being blocked by the late Nik Aziz. Them opposition parties seem to be doing this a lot. Photo credit to blog.commercialedge.com

You might have noticed that alot of these rumours stem from disagreements between PAS and another opposition party, the Democratic Action Party (DAP), mainly about PAS’ intention to impose Hudud law in the state of Kelantan. Over the past few months, the tempers have flared so much that the other party within Pakatan, Parti Keadilan Rakyat, had to step in to mediate.

But despite this, the disputes have continued. DAP even announced that they have ended ties with PAS’ president, Dato’ Seri  Haji Abdul Hadi Awang. On the other hand, PAS has publicly rejected DAP’s attempts to set up a ‘Shadow Cabinet‘ and Hadi was ready to cut ties with them.

But despite all that’s being said, does PAS actually intend to leave Pakatan and maybe join up with UMNO? We thought so… To be honest, this article was intended to be about what would happen if PAS left Pakatan. So we asked our usual ever-ready parliamentary consultants, Ooi Heng from KPRU and Ong Kian Ming from DAP for their thoughts on PAS leaving Pakatan.

*Disclaimer: UMNO and BN may be used interchangeably throughout this article.

So this is more or less why we had to change our title for this article. Haiya.

Well maybe our minds didn’t explode but we certainly weren’t expecting that answer.

At that moment we jam already. Despite of all this talk about PAS leaving and Pakatan breaking up, Ooi Heng didn’t think it would happen. Ong Kian Ming then said that while there are those who are uncomfortable with working with Pakatan (and even those who would rather work with UMNO), there are also those who would want to stay with Pakatan.

“I would say that more than 50% of PAS members want the party to remain within Pakatan.” – Ong Kian Ming

But why is there this divide in PAS? Well there has been a lot of news going around about how the problems stem from the current president of PAS, Dato’ Seri Haji Abdul Hadi Awang. 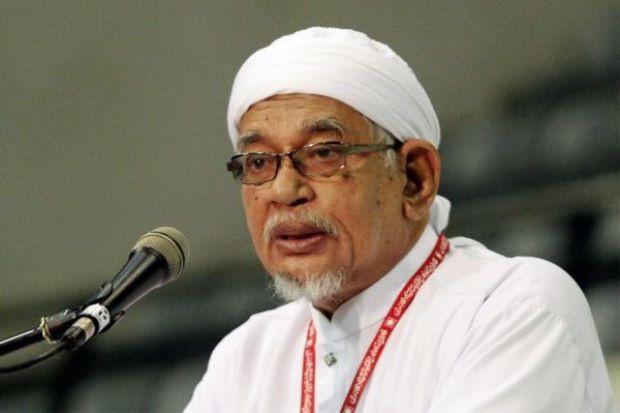 ….and even if they do, there’s a backup of PAS called PasMA (whaaa?)

As for the comments on members who want to stay in Pakatan, there actually is an offshoot of PAS knows as PasMa.

PasMA is an NGO made up of PAS members that is committed to ensuring that Pakatan doesn’t join UMNO. That and they’re also pro opposition. So much so that they’re considering becoming a political party to join Pakatan. PasMa president, Datuk Phahrolrazi Mohd Zawawi. Head of the party that could possibly replace PAS in Pakatan. Photo credit to The Star.

But until then, as far as official news goes, PAS has said that they are committed to Pakatan Rakyat.

“I urge all parties in Pakatan Rakyat to be magnanimous and optimistic in protecting the co-operation and not be negative or pessimistic as it would only weaken the relationship.

At a time when Umno-BN is losing the trust of the people, Pakatan Rakyat should strengthen itself and protect the camaraderie which had been built all this while.” – PAS Information Chief, Datuk Mahfuz Omar, as quoted by The Rakyat Post.

The Malay Mail also reported that Hadi said that he is still for Pakatan for the time being.

“For now (I) am still with Pakatan. I still sit in the same seat. I am now focused on the muktamar (PAS general assembly). We will wait and see.” – PAS president, Abdul Hadi Awang, as quoted by The Malay Mail Online

You can imagine DAP giving a response like this to Hadi when he said he was still with Pakatan.

In a nutshell, all that we’ve written kinda points to PAS staying in Pakatan. But even if they leave?

PAS will most likely not join UMNO

Back in 1974, PAS and UMNO joined for a single four-year run. We won’t go into detail about it but basically PAS was in fact part of the Alliance (later Barisan National). It didn’t end well. A power struggle led to BN taking advantage of the situation and taking Kelantan from PAS.

NAH, BACA:
Are Msian politicians able to buy bungalows with their salaries?

This time, with PAS on rocky relations with DAP, a former Chief Justice exclaimed that there is a need for a Unity Gomen to curb the power of ethnic minorities (unnecessary, we know), and Guan Eng of course saying that Abdul Hadi Awang intends to form a UG with UMNO.

This hasn’t been helped by Hadi saying that Najib should soldier on as Prime Minister of Malaysia. However, Ooi Heng didn’t think that this would happen.

However, Ooi Heng did mention the possibility of PAS not joining but supporting Najib’s agenda. This would be advantageous in situations such as a two-thirds majority.

Ong Kian Ming took a different approach to his response. He said that PAS would be more inclined to join BN ONLY if PAKATAN fell apart.

“I think if Pakatan breaks up, there will be more pressure for PAS to move closer to BN for two reasons. One push reason is because Pakatan is no longer there to hold PAS back from working with BN / UMNO. One pull reason is that UMNO may try to entice PAS in order to strengthen the Malay support for the BN.” – Ong Kian Ming

But how about what we can gather from the news? Well, PAS information chief, Datuk Mahfuz Omar said this.

“I would also like to assure that no one in PAS would bring the party to join BN, but if there is, I would be the first to oppose it.” – PAS Information Chief Datuk Mahfuz Omar, as quoted by The Rakyat Post

PAS presidential nominee, Ustaz Ahmad Awang also stated that no such Unity Government had been agreed on because the late Nik Aziz was opposed to the idea.o basically, even if Pakatan did leave BN, it is not a sure thing that they would link up with BN.

For PAS (or any party) to get things done, they have to pick a side in the end Those are the Sabah (bottom) and Sarawak (top) flags, in case you were wondering. Image credit to theantdaily.com “If there is a general election in this situation, PAS cannot win (without DAP and PKR), we cannot get non-Malay support.” – Ustaz Ahmad Awang, as quoted by The Malay Mail Online

So here’s the thing. There are way too many people in Malaysia that don’t support an ultra-conservative Muslim regime. So PAS is not going to win an election on their own anytime soon.

With hudud especially, East Malaysia has kinda already voted. The BN component parties of Sabah and Sarawak have made it clear that they are against the Hudud law. Also, the Sabah and Sarawak branches of DAP have already completely cut ties with their PAS counterparts.

In GE13, PAS won 21 seats vs PKR’s 30 and DAP’s impressive 38 (own from GE12’s 23 seats, and GE10’s 27 seats). So they’re the smallest factor, but still an important 26% of the overall vote, particularly in the northern states. But alot of that goodwill seems to stem from their part in PAKATAN as well.

“Whoever breaks up Pakatan will be penalised in the next GE. If in the end PAS stays and DAP quits, DAP will also be penalised,” says Ooi Heng

But if they decide to leave anyway? 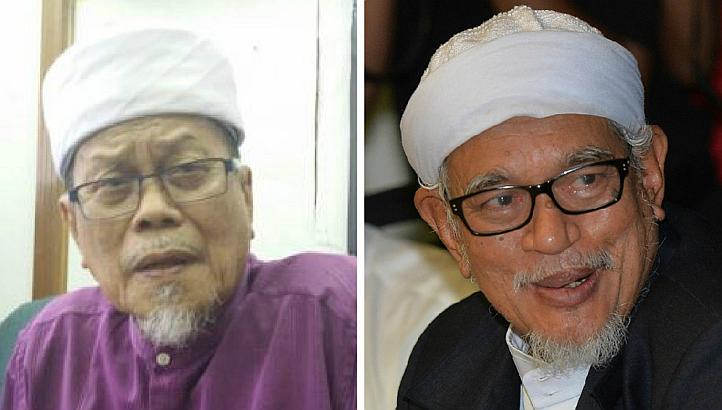 Ong Kian Ming said that in the event that PAS leaves, the opposition would have to do some rethinking to do.

“It would be a blow to Pakatan in the short term but it presents opportunities for the opposition to reconfigure itself especially if PAS moves closer to UMNO and this makes other non-UMNO BN parties especially in Sarawak and Sabah very uncomfortable.” – Ong Kian Ming

Alot of this comes down to the coming PAS party polls in June. Ong Kian Ming doesn’t believe that PAS would officially leave Pakatan even if Abdul Hadi Awang were to retain his position as party president. And Ooi Heng agreed with this saying that if Hadi did win the party elections, he would rally PAS to continue pushing forward with Pakatan.

BUT, he also added that if PAS saw a change in leadership, it would redefine its political message to be one that is in sync with Pakatan’s goals.

Until the PAS party polls, can everyone just chillout for a while?

Shots have been fired between PAS and DAP the whole week. First, DAP forms a shadow cabinet without PKR and PAS. Hadi then says they were ready to cut ties with DAP over it. DAP then replies by telling Hadi to join UMNO. Then other PAS members jump to Hadi’s aid telling DAP to stop their attacks.

June isn’t that far away, and on balance, no political party has anything to gain from in-fighting. It just makes the people lose confidence, like children watching their parents fight.

Luckily, Rafizi Ramli agrees, telling both PAS and DAP to cool off their disagreements until the PAS elections were over. And maybe that’s what the opposition needs at the moment. A few weeks for PAS to sort out its leadership before saying words that are difficult to take back. 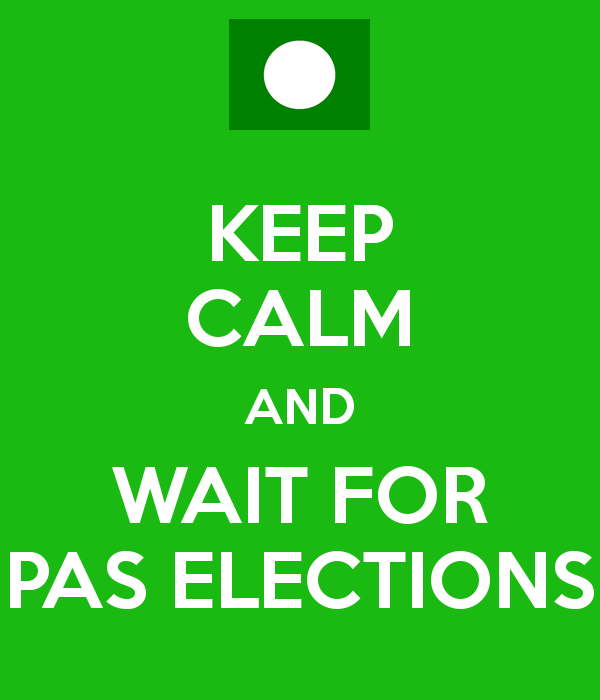