Last week, CILISOS had its annual company trip. This time we decided to stretch the budget (and geography) a bit and go further than Cameron Highlands (which was our trip last year). So we packed our bags, said good riddance to our office, and ciao-ed. This is where we went: 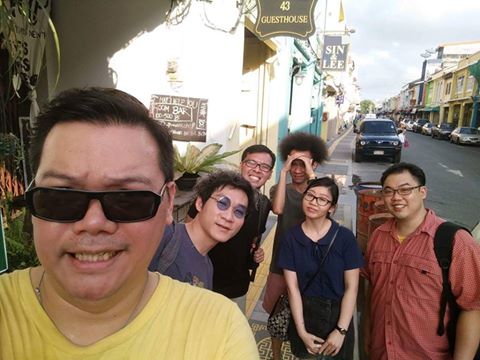 Does the street look familiar? Ok we’ll give you more clues: (Left) This writer with a local woman. (Right) Us in a hipster shophouse cafe

Nope! It’s not Penang or Malacca or Singapore. This is in Phuket

More specifically, it was Thalang Road, in the Mueang district of Phuket. Our guide Mr. Big took us there to makan angin and the minute our van turned into the road, it felt as though we went through a portal into Penang or Malacca. Everything on that street had that ‘look’ – heritage shophouses, hipster cafes, Baba Nyonya clothing stores, and people dressed in Baba Nyonya style. We were totally mind-blown!

Some of you guessed that our team went to Penang, Malacca, or even Singapore, though some correctly guessed that we were in Phuket. 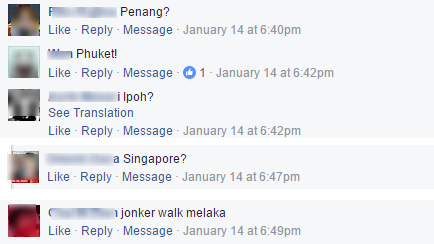 Not bad, not bad

One person remarkably took a Google Street View screengrab and circled a spot!! First thing we did was to visit the Thai Hua Museum (rated 4 stars out of 108 reviews on TripAdvisor). Entry was 120 Baht per person (RM15), said the lady at the counter in Mandarin, to our amazement. It was really starting to feel more and more like Malaysia.

Turns out, it was formerly a Chinese-language school, but now it’s being used as a museum and exhibition space, featuring Baba Nyonya (aka Peranakan) culture. Boy, were we in for a whole afternoon of revelations about Phuket… Statues of Peranakan women in traditional costume at the museum entrance

So we know that Baba Nyonyas are actually descendants of Chinese people from Fujian, China, who sailed to the Malay archipelago including Malaysia (known back then as Malaya) and married local Malays. They settled in Singapore, Malacca and Penang, and then eventually made their way to Phuket – particularly Penangite Baba Nyonyas!

During the latter part of King Rama III’s reign from 1824-1851, until 1937, the tin mining business was booming, that’s when Penangites began moving to the island in search of tin. Based on their temporary immigration papers in 1928, these people indicated that they not only worked in mines, but also specified their occupations as crew on boats, technicians and traders. Ya, they probably looked like this :p (Syok sendiri-ing on a seat shaped like a boat in the museum video room)

Phuket Baba Nyonyas share some similarities in culture with Penangites (like their fashion 😉 ), however there are certain differences. For example, the original Hokkien dialect of first generation settlers has become more Thai rather than Malay. Interestingly, they use “Baba” for men just like our country, but in the Thai language, the word “Nyonya” is not pronounceable, so women are instead referred to as “Yaya”. Baba Yaya!

“About 70% of Phuket’s total population is descended from Peranakan (aka Baba Nyonya) roots.” – Dr. Kosol, President of the Phuket Peranakan Association, peranakan.hostoi.com We came across this odd Phuket lullaby about the Chinese migration

And, wherever Chinese peepur go, sure got fighting one la 😛 Similarly, when they arrived in Phuket, they started their own secret mafia gangs called Angyee, related to the one in Penang. Angyee was formed to fight for their rights on the land where they lived (the causes being discrimination and economic crisis), so these Angyee gangs would fight with the government, with each other, with the locals and so on. Finally, the government was SO SICK of their violence, they lowered taxes and appointed local Chinese leaders in government positions, to stop the Angyee from creating trouble. In Thaihua Museum, a couple of famous Thai-Penang figures are featured, like ‘The Creator of the Palm Kingdom’ and the ‘God of Tin’. The Creator of the Palm Kingdom is Eabkimjian, who was famous for bringing a new type of rubber tree from Malaysia to Thailand. He was also a bigshot construction contractor with a foreign company and contracted the marine shipping between Phuket and Penang.

Meanwhile, the God of Tin guy was Tanjin-nguan, who started his own tin mine business, becoming was the first person to introduce the gravel pumping method from Penang to Phuket. He has been honoured by Thai royalty and the people of Penang, who nicknamed him ‘Sia-bee-ong’ meaning God of Tin.

Tin mining aside, Baba Nyonyas brought food, fashion and fun to Phuket too From one room to another, the museum has a wealth of information and a sense of humour too (but more on this later 😉 ). We discovered that the Baba Nyonyas introduced their food to the island – stuff like pulut, kuih seri muka (the half green, half rice diamond-shaped one), ang ku kueh, yam cake, and more! Not just kuih…even dishes like Hokkien mee and kari mei fun (curry mee hoon) were featured there.

Yumm they have Hokkien mee and kari mee. But looks like they don’t like ais kacang very much. O-ew :p

But this is probably not surprising to some of you, especially if you’ve gone for their night markets. The stalls there do sell Malaysian-looking food or kuihs. One other familiar thing we saw was this vehicle (below). It kinda reminds us a lil’ of the trishaws in Penang or Malacca, except this one is more advanced: They call it a pho thong

Instead of an uncle cycling it, this vehicle has a proper engine. The ‘Phothong’ car (photong literally means ‘ordinary’ in Hokkien), is a passenger truck that Phuket people mod back in the old days. Pickup trucks were not available, so people potong (haha pun intended) sedans imported from Penang, only the front part and lower chassis were left. Then a new body made entirely of wood with a roof was attached to it. Then, two rows of benches were fixed in so that people can sit in it.

Even the fashion and architecture is reminiscent of Penang and Malacca. For ladies, there developed a type of fashion named the Ba-Ba dress (part Chinese called Nyon-Ya and part Malayan robe called Baju Panjang), plus the Kebaya. Thai-Muslim men wore a black folded turban called a Song Goh, and from the waist, they wore a Sa-rong, and of course, they brought over the famous batik. Buildings were influenced by Penang’s famous Anglo-Chinese architecture.

In one section of the museum, they displayed old books used by students when it was formerly the Chinese school. Some of the books were in Chinese and difficult to source, so they had to order them from foreign countries via Penang. Then, in one corner, we found this bigass Chinese typewriter. When we looked at it very closely, we saw it had tiny keys with Chinese characters on them. It was such an impressive looking machine!

Chinese typewriter not recommended for Dota. Check out the detail tho

BUUUT our absolute favourite part of the museum was this little doll house installation, which showed how a typical family would have lived in a Penang-style shophouse back in the days: In this scene, the guy got a surprise visit from an old friend (standing outside the tiny door)

Watch this video for a tour of this tiny doll house. Trust us. It’s worth it in the end :p

But Phuket is losing its Baba Nyonya culture. To a certain extent, so is Malaysia

Even though we intended to get as far away from the office as possible, it was still nice to see elements of Malaysia in such a tourist hotspot as Phuket.

While it was awesome for us to have newly discovered that there is a Baba Nyonya community there, we found out that sadly, it is having just as hard a time maintaining their heritage, as its origin state Penang, and Malacca. In the face of modernity, youngsters are not concerned about carrying on their ancestors’ culture. 🙁 Well, the Phuket municipality is trying to do something about it with the Department of Public Administration, Ministry of Interior, private sector and the locals. The thia besar or reception hall of the Baba Nyonya Heritage Museum. Image from babanyonyamuseum.com

What about Malaysia’s preservation efforts? From what we read, Baba Nyonyas here are trying to preserve culture through private initiatives on their own, such as setting up private museums eg. the Baba Nyonya Heritage Museum located on Jalan Tun Tan Cheng Lock (an effort in neutralising the massive export of Baba Nyonya heirlooms to neighbouring countries). Several awareness programmes were also launched in Penang, Selangor, and KL thanks to the efforts of the Peranakan Baba Nyonya Association of Kuala Lumpur & Selangor  (PPBNKLS).

When PPBNKLS’s President Dr. Lee Su Kim was in her 20s to 30s, she wasn’t interested in her roots. She almost ‘lost’ her identity symbolically, when her mom offered her an intan (diamond) pendant but she rejected it because it was old-fashioned. Thankfully the intan remained in the family because it was given to her sister. It was only later that Dr. Lee realised its true value. It’s moments like these that make us realise, hey, we don’t want our culture and identity – whether Baba Nyonya, or otherwise – to be lost forever.

“Ultimately, we would like to prevent our Peranakan heritage from becoming merely a ‘museum culture’ but revive it to become a thriving, living culture for current and future generations. Like a beautiful melody or a fantastic book that you do not want to throw away after finishing it, we do not want this culture to disintegrate or only exist as plates in a museum.” – Dr. Lee Su Kim, Malay Mail