Not too long ago, we did an article about how our next General Election may be happening in a few months. Last year, PM Najib actually said that our GE would take place after Raya! But….

“I can only say the general election will be held after Hari Raya. But as to which year’s Hari Raya, I don’t know.” – Prime Minister Najib Razak, as quoted by Straits Times

And that still doesn’t narrow it down very much because it could also be after Raya 2018 because the latest BN can hold the election is August 2018.

But even if it may be a year or two away, that hasn’t stopped people from talking about it. Look at all that GE14 related news.

In fact, one company called Invoke Malaysia actually went as far as to survey 100,000 people to ask them how they would vote in GE14, and the results are quite interesting. Just to be clear, Invoke Malaysia has not released the full results of their survey. The ones that we’ll be referring to are from their preliminary results and observations. And for additional info, we spoke to Shaun, the Strategic Director at Invoke Malaysia, for more info.

If the name Invoke Malaysia sounds remotely familiar to you, it’s because this was the organisation launched by Rafizi after he was convicted of revealing sensitive 1MDB information (because they were classified as secrets under the Official Secrets Act).

The two main fellas already from PKR. In fact we found out about this survey from Wong Chen’s Facebook page.

On their website, they actually mention that they have other policy papers written (the link is not available on their website yet, we’ll link when it’s ready). But this time, they were really ambitious.

So if you think 104,340 respondents is a huge number, it’s actually just 1.25% of the number of people they actually tried to get in contact with. And they didn’t actually call each of these people manually la, but those automated telephone machines (known as Interactive Voice Response). 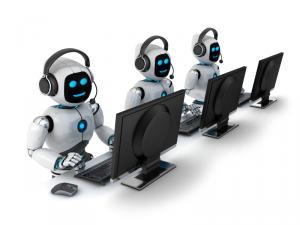 In very simple terms, robots calling you. Image from theleadgenerationcompany.co.uk

Still, more than 100,000 people is quite impressive for a survey. Our interview with another Malaysian pollster, Merdeka Center, revealed that they try to get between 1000-1200 respondents.

But did they interview the right people?

When it comes to any survey, it’s important that the people in the survey are representative of the general population. For example, it wouldn’t make sense to have a survey on motorbikes but all your respondents use cars right? Same thing with this survey. It wouldn’t be a very good survey if most of the respondents were from one race, or one state, or had the similar income.

Invoke Malaysia gives a rough idea of the demographics of the 8 million people that they called. Aside from race, they also include other demographics which you can check out in their preliminary findings. But once again, these figures represent the number of people they called, so the demographics of the respondents may actually differ from this, and Shaun tells us that those stats will be released in their full report.

So with that in mind, what did this survey find out?

An analyst recently predicted that there won’t be a “Malay tsunami” in terms of support for the opposition. He said that only urban Malays would be keen enough for change to vote for the opposition. With that in mind, most of us would expect BN to still command quite a huge number of the Malay votes, but this survey showed that the number isn’t actually very high. But Shaun tells us that all the surveys were conducted in BM, and in the midst of that, they actually found out that non-Malays who were willing to answer a survey in BM were more likely to show support for BN. And to try to make their data more accurate, Shaun says they are in the midst of conducting a few extra surveys in Chinese and Tamil.

But if less than half of the Malay population is voting for BN, does that mean Pakatan is going to win? Well….

Pakatan can win GE14 but it depends on one other party

So some of you may feel that because Invoke Malaysia is helmed by the opposition, their survey results would definitely look favourable for the opposition. Except….it’s not. Their survey is actually focused on what would happen if there was a 3-cornered fight between BN, Pakatan (which includes PKR, DAP, Amanah, and Bersatu), and PAS.

And based on their research, Pakatan can win GE14 under 2 conditions:

In other words, it seems like Pakatan’s hopes for victory are strongly centered around PAS. Invoke’s prediction if there is a 3-cornered fight in the next GE.

They also mention that in a 3-cornered fight, PAS would lose all their seats, and Pakatan is likely to retain Selangor and Penang. But does that mean things are looking good for BN? Maybe, but this survey also showed something that may worry BN.

So the big question – does Pakatan have a chance in GE14?

Based on the 2 conditions for a Pakatan win mentioned earlier, we can safely say that there’s no way PAS won’t be involved in the next GE. Their president, Datuk Seri Abdul Hadi Awang, recently said they’re already conducting a study about which seats to run for in GE14.

So that leaves us with Pakatan and PAS working together. Sadly that too sounds highly unlikely. PAS has said a few times that they will never work with DAP or their splinter-group, Amanah.

“DAP has shown it is anti-PAS while PAN (which was formed by former PAS leaders) are traitors.” – PAS vice-president, Datuk Mohd Amar Nik Abdullah, as quoted by NST 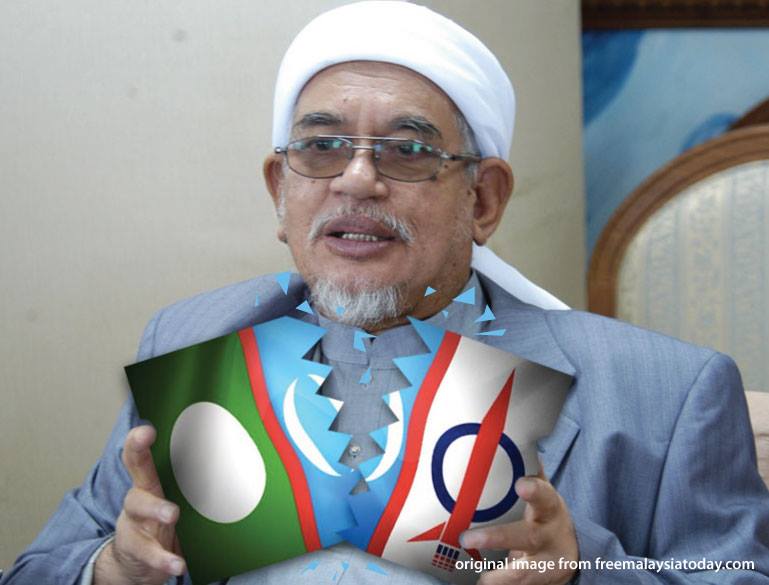 So it really doesn’t look like there’s gonna be a reunion. In fact, there have been signs of PAS going in the other direction towards….BN.

“This is not a start but a new approach that we are taking. We are willing to meet the ministers concerned and the Prime Minister, towards resolving issues of the people.” – PAS President, Datuk Seri Abdul Hadi Awang, as quoted by Straits Times Najib and Hadi at a Muslim seminar together. Image from news.asiaone.com

But to be fair, in more recent times, PAS has actually said stuff that show that they’re not entirely on BN’s side either.

“There has been a wrong perception from opponents that PAS is currently no longer interested to change the BN ruling government.

PAS will continue to fight for justice for all races and opposes corruption and misuse of power as well as swindling in the BN government.” – Datuk Seri Abdul Hadi Awang, as quoted by The Malay Mail Online

Will GE14 actually turn out the way this survey predicted?

So with PAS seemingly on neither BN or Pakatan’s side, it looks like a 3-cornered fight is a strong possibility after all, and the survey results actually point to a BN victory in GE14. And that is something a few analysts have said as well.

But then again, these are based a sample of 100,000 people. It could be accurate, but politics do have a way of surprising people (like when Donald Trump won the US Presidential Election). Even he was surprised! Image from politico.com

And one thing we do have to bear in mind is that in the US, it’s not the number of votes that determines who wins, but people in the right areas. Ironically enough, it’s the same in Malaysia as well.

Shaun also tells us that in the last quarter of 2016, it was reported that 500,000 Malaysian had registered to be voters, an amount that is said to be 5 times more than the average quarter.

So while this survey can give us an indication of what may happen, it doesn’t mean it will. In their survey, Invoke Malaysia also did list down what Pakatan needed to do to solve their problems, and if BN takes notice of the survey as well, you can bet they too will be trying to work on their weaknesses.

With that in mind, let the Hungry-For-Power games begin! (You Stephen Colbert fans know what we’re talking about  😉 )

Share this article:
NAH, BACA:
What's this 44-year-old govt agency that Syed Saddiq is trying to shut down?!