[Orginal story from SOSCILI.MY. Click here to read. Shamsiah Fakeh’s memoirs, Memoir Shamsiah Fakeh: Dari AWAS ke Rejimen ke-10 was referenced for the writing this story. It will be shortened to DAKR10 from here on.]

In a time long before Malaysians came together at Dataran Merdeka, even before the birth of Barisan National, conflict within the Malay community was brewing. It’s the typical story of two political sides with opposing views, but this time it’s how best to achieve Merdeka .

At that time, the two sides were: 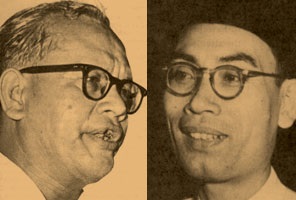 In the heat of the battle, emerged a young lady named Shamsiah Fakeh, and this her story of patriotism and where it took her. 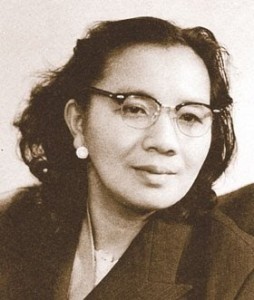 Shamsiah Fakeh was born in 1924 Kampung Gemuruh, Kuala Pilah, Negeri Sembilan, into a poor family. Her simple ambition was to seek higher education, so that her family would have better days ahead. But little did she know, her chance of fulfilling her ambitions would crushed with the approach of World War 2, and so numbered would be her days with her family.

Listening to the speeches of UMNO and PKMM leaders as a young woman, they sparked a sense of patriotism in her, and when she met Wahi Anuar, one of the PKMM leaders (who would later become her husband), so began her fight for independence. But the moment that spring-boarded her into PKMM was during a conference in Seremban, where she had the opportunity to deliver a speech. Her speech struck a chord with the audience, it was inspiring, so magnificent and sensational that it even made the news on Utusan Melayu.

“Coincidentally my father bought and read the newspaper when my speech made the news. With a smile and his face aglow, he handed the newspaper to me.” – DAKR10, page 33

In a short time, she was picked to replace Aisyah Ghani (post-independence UMNO veteran and the first woman senator) as Ketua Wanita PKMM. She was such a strong figure that when Angkatan Wanita Sedar (AWAS),  the first nationalist organisation for women was formed, Shamsiah was chosen as one of their leader too. For Shamsiah, the fight to end oppression of women and the fight for independence was one and the same, and AWAS represented exactly that. “I didn’t know anything about politics nor had any experience leading nationalist movements. But what I had was a fiery and unyielding spirit, to fight the colonialist for the freedom our nation. I was fearless.” – DAKR10, page 37

But the government clamped down on their organisations, causing them to be outlaws 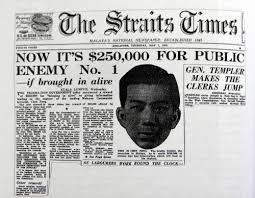 How they crop his head last time????? Image from chinaworker.info

If you remember your sejarah lessons, communists and socialists were considered enemies and terrorists of the government at that time. Unfortunately for AWAS and PKMM, both parties were considered left wing parties as they were anti-colonial and accepted socialist ideologies, and they were fighting a battle they couldn’t win.

“Members from left leaning parties and organisations were always slandered by members of UMNO. The British government were also always watching and intimidating them.”  – DAKR10 , page 31

When the state of emergency and darurat laws were put into place in 1948, the fight for PKMM and AWAS was put to an abrupt end. All left leaning parties were criminalized, its members and leaders were ordered to be arrested. Party leaders Ishak Hj Muhammad and Dr Burhanuddin, and many members were arrested, but Shamsiah escaped.

She fled to Pahang, and hid in a village called Kampung Lubuk Kawah, and here was where her ties with communism would be formed. Through a Chinese man with a Malay name called HJ Hashim, a member of The Malayan Communist Party (MCP, better known to Malaysians as PKM) she warmed up to the PKM. In this village she received military training and studied communist ideologies, until she finally officially joined PKM in 1948.

“I was not surprised when I became an official member of PKM. In fact, I was glad. What I understand about the PKM, is that they are a party that dares stand up against the British for independence.” – DAKR10, page 54 Shamsiah realised, that the option for a peaceful solution disappeared when the government declared a state of emergency and outlawed her party, so she now had to continue the fight in another way. Many would accuse PKM of betrayal and cruelty, for taking up arms against the British and the Malay majority authority, taking lives and wounding innocents in the process. But to Shamsiah, it was the last refuge to continue her fight for independence, even when the enemy has superior firepower and the help of foreign countries.

“In the war between justice and injustice, it’s hard to avoid the spilling of blood. Whoever fights for the colonials will get what they deserve; it is their own fault for siding with the colonials.” – DAKR10, page 62

She fought under the banner of the 10th Regiment (Rejimen ke-10), and the forests became their stronghold against their enemy. She had become lost in the forest by herself 3 times, and things was especially difficult since she had to take carry her newborn child around at the same time.

Morbidly, she was alleged to have murdered her own infant child because she was afraid the crying would give the regiment away to those that were hunting them. There are 2 versions of the allegation:

Shamsiah herself strongly denied these allegations, saying that she was persuaded to give her child away to a family that’s due to return to China, so she might one day reunite with her child. But it turns out, her child was actually killed by 3 other members of team without her knowledge. Musa Ahmad himself told the truth 3 years ago, and Shamsiah was puzzled as to why he would accuse her of such a thing.

But she was then exiled… to China!

Things were not going well for the regiment, or for PKM for that matter. They received orders to retreat and rally at the Thailand-Malaysia border. There, Shamsiah somehow found the time to marry Ibrahim Mohamad, and together they were sent to China in 1956 to receive more communism. Together, they worked as Malay language broadcasters at Radio Beijing, airing propaganda back to Malaya. Nine years later, they were sent to Indonesia to set up a branch for the party, and things took an unexpected turn. Their visit coincided with Suharto coming into power and communists influence were being purged.  Shamsiah and Ibrahim were arrested and imprisoned, but they were released two years later (in 1967, if anyone’s keeping track) and managed to return to China… where another surprise awaited them there.

Due to the influence of the Cultural Revolution, PKM has been split into several factions. Infighting and internal conflicts had threw the party into chaos. Shamsiah and her husband tried speak out against them, for the sake of the party they served, but they were humiliated and expelled from the party for disobedience instead.

“We were brought before the PKM court for disagreeing with their ways. Our hands were bounded, we were slapped across the face, and forced to bow and admit our wrong doings.”- DAKR10, page 118

They were placed under house arrest by the party for another 2 years. Guards would escort them whenever they went out and their house would be guarded 24/7. As Malaysia still did not welcome returning communist, they had to live as Chinese citizens after leaving PKM, working at a steel factory (she also worked as a Malay language consultant). But this story has a happy ending (sort of), Shamsiah and Ibrahim would be allowed back into Malaysia, in 1994, almost 4 decades later. 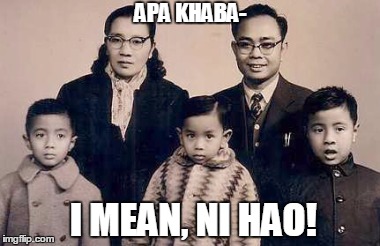 “Ni Hao” as in Ni Hao. Image from Wikipedia.

Eventually, she returned to the land she fought for

Cry if u remember this :`( . Image from Quora

In 2nd December 1989, a peace treaty was signed between PKM and the Malaysian government, opening the doors for Shamsiah and Ibrahim to return to Malaysia. They returned to Malaysia 10 years after she and her husband applied for the permission. The permission came with many conditions, for instance, she was not allowed to partake in politics or academic speaking events. Her memoir was even withdrawn when it was published.

“It doesn’t matter why they took so long [to allow our return], we were just glad and grateful that we were coming home. How we longed to breathe the air of our home, and see our family again after 46 long years.” – DAKR10, page 127

Shamsiah lived the rest of her years in relative peace in Malaysia, and passed away at the age of 84, on 20th October 2008. 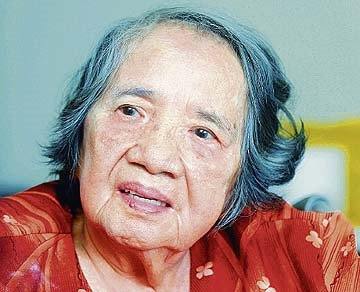 Her legacy shows us a different side to communism We sought the expertise of Prof Emeritus Tan Sri Khoo Kay Kim in this regard. According to him, communism did not sit well with the majority of the Malays and Muslims. And even thought we like to assume most Chinese supported the communist, most of them didn’t really liked the idea either.

“Only the Hailam Chinese supported the communist. The majority actually rejected the communists, a group called Kong Sai that was strongly against them. They lived in Lenggon, Perak. They were the ones that joined Kinta Valley Homeguard.”  – Prof Khoo Kay Kim, in an interview with SOSCILI

While the communists thought they were fighting for independence, they were in fact unknowingly delaying the independence of Malaya. The British had already decided to leave, but they had been pressured to remain and hapus the communist.

“Many people didn’t know that since 1943, the British had already announced that they would return to Malaya shortly and then leave Malaya by ending their agreement with the Conference of Rulers (Majlis Raja-raja).

When the British returned after World War 2, Malaya had been heavily influenced by communism. The British had a responsibility to the Conference of Rulers (Majlis Raja-raja) to defeat the communist before leaving Malaya.” – Prof Khoo Kay Kim, in an interview with SOSCILI

According to him, part of that pressure also came from United States of America.

“America was very concerned with the communist movement, and was in the opinion that giving independence to the colonised countries was the best way to stop their influence. America bargained that if the British did not leave Malaya, they would not buy their rubber and tin ore.” – Prof Khoo Kay Kim, in an interview with SOSCILI

Still, we cannot deny that the communist ignited the spirit of patriotism in Malaysia. The second deputy prime minister of Malaysia, Tun Dr.Ismail Abdul Rahman also acknowledged this in his acceptance speech for his honorary masters presented by University Sains Malaysia. In fact, Shamsiah herself summarised this pretty well. When she was asked about Aisyah Ghani’s (the first woman senator) comment about her being manipulated by the communist party, she had this to say:

“Aisyah and I are like sisters to each other, she is a patriot, and I am proud and happy for her success! What she said might be true, but if I chose the easy life with no risk, then I wouldn’t be Shamsiah!” – Shamsiah in an interview with Mastika (2007), DAKR10, page 134

Shamsiah Fakeh will be immortalised in Malaysian history (although not in our history books), along with Ishak Hj Muhammd, Dr Burhanuddin al-Helmy the and others like her, and it will be up to those who know their history to interpret what their fight had meant.

Share this article:
NAH, BACA:
OMG! Brazil has its own 1MDB! But how are they dealing with it?