**This article was translated from BM. To read the original article on SOSCILI click here.

You may have read by now about how Al Jazeera uncovered a baby trafficking controversy in Malaysia and after that it went bats on many news site. Through heart-thumping detective work, Al Jazeera exposed a baby-selling racket, which ended up with 3 people arrested – a 38-year-old woman named Bonda (sort of the ‘ringleader’), Bonda’s son, and a medical assistant who works at a private clinic in KL.

But this one single racket aside, Al Jazeera’s video revealed the bigger picture that Malaysia is a baby trafficking hub, where buyers could literally choose their babies according to sex, race and skin colour! It’s like when you when you see a worm wriggling under a stone, then you pull the worm, only for the stone to flip up and reveal a whole colony of wriggly, slimy worms. So geli! Anyway, if you haven’t watched the video yet, we highly recommend it. Here it is:

Before this big exposure, baby trafficking has been rooted in Malaysia for quite long aldy and has been reported in the news. According to Harian Metro, from February 2008 to August 2015, the cops have investigated 39 baby selling cases in Malaysia and caught more than 140 individuals. Remember the mass graves of human trafficking victims discovered near the Thai border?

Despite Al Jazeera’s exposé, IGP Khalid denied that our country had become a baby selling hub…well, he said memang got baby-selling activities la, but it is not as EASY as reported. This was Bonda’s account before she kena arrested. ‘FA’ refers to family angkat. Screengrab from Al Jazeera

You just need to type key words like ‘anak angkat’ or ‘anak anugerah’. We tried searching in English using words like ‘baby’ and ‘adopt’, but then no groups popped up (it was mostly recent news articles on the baby trafficking).

Got catalogue for babies summore, according to sex, race and skin colour! Child rights activist and foster mother Hartini Zainudin explained how the pricing works:

…though we’ve only been approved by a few of them, not all (at this time of writing). 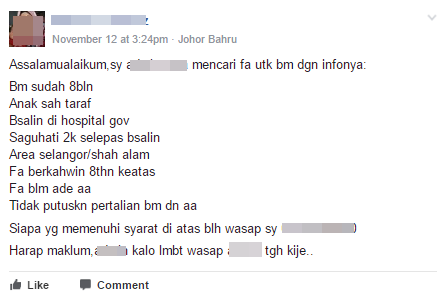 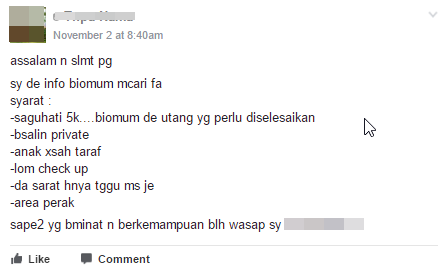 Postings by people looking for babies to adopt:

Not every adoption though social media sites are baby-selling though…

It should be mentioned that these groups are not necessarily ‘selling’ babies illegally, because we don’t know what agreement the biological and foster parents have. There are people who post on groups asking for money, while some don’t talk about money at all. Meaning that you can find a baby to adopt online and people who want to give up their baby can look online as well, but when MONEY is involved, that’s when it becomes ‘selling’!

In fact, sometimes biological parents don’t ask for money outright as if ‘selling’ their baby. Instead, they ask for shelter for the mom before delivering the baby, hospital treatment cost, a place where she can have her confinement (pantang) after delivering, and so on: According to the National Registration Department (NRD), parents can actually find their own baby to adopt first, then only go to NRD office and apply for adoption papers. That is to say, you don’t have go to NRD asking them to provide you the baby. This is called de facto adoption (where the child is in the custody of, is being brought up, maintained and educated by any person or a married couple for a period of not less than 2 years).

[P/S: If you want to apply for adoption papers, just go to any counter of any NRD office located near your place of residence. The child must be present during the adoption proceeding, however the biological parents don’t have to be there. A fee of RM30 will be charged upon approval.]

So, because the lines are blur on social media sites and because traffickers are really sneaky, it’s easy for people to fall into a trap, including parents who are looking for legitimate ways to adopt a baby. Happened to Hartini, who didn’t know she was being ‘sold’ a baby girl until she got into the car with traffickers and they demanded US$3,000. As a child rights activist, she often receives calls to rescue abandoned babies, and she thought that was one of those times. Hartini paid the traffickers to release the baby and adopted her

And that’s what happened to a friend of SOSCILI’s, Nurul. She and her husband were looking on Facebook for a baby to adopt, thinking they would get genuine parents who were looking for good homes for their babies. She didn’t know the people she was talking to (they didn’t use real names) and only corresponded with them online.

“They (the agent/middleman/birth mother) would contact me to discuss payment and treatment costs…once everything has been agreed upon, then only they will they want to meet up.” – Nurul, interviewed by SOSCILI

Nurul certainly didn’t expect to be flooded with demands for money in exchange for babies. It was on these sites that she saw the ugly reality of some people willing to give up their flesh and blood for money.

“Last time, I inquired at one adoption group, then the person asked for RM10,000. When I threatened to make a police report, the person straightaway blocked me.” – Nurul

Finally, Nurul decided not to adopt any babies online because she felt that a lot of people seemed to want to money. Instead, she applied to NRD and has been on the waiting list for one year plus.

For many Malaysian foster parents like her, the wait is long and torturous. Pity the couples who genuinely want to adopt a child for their own. 🙁

So improving the adoption system could curb baby trafficking in Malaysia So, it is established that it’s not difficult to buy a baby from one of these syndicates online. What can we do to stop this?

1. Speed up the adoption process

While the process for adoption is generally simple and straightforward, it is the wait for a baby can take up to a year (or more in Nurul’s case). Complications arise if it’s unknown where the child came from – if the child’s documents are not available, if the child was not born in Malaysia, or if government officials ask for bribes.

Another problem as one adoptive parent told The Malay Mail was that the system doesn’t allow non-Muslim parents to adopt children categorised as Muslims. BUT any baby that goes to a home run by a Muslim carer will be treated as Muslim. This decreases the chance of adoption by non-Muslim parents. There are more Chinese couples adopters that are in the system looking for babies,” she said.

We understand there could be merits to strict adoption rules, in the sense that they wanna make sure the parents can indeed provide for the child and are in it for the long haul. What they could do is make Welfare Department monitor babies AFTER the adoption process maybe? Keep tabs on the child until they reach the age of 18. Better than making it near impossible to adopt. Waiting to be adopted can be painful for children too, we’re sure. Disney’s Penny is an orphan who longs to be adopted. From the movie ‘The Rescuers’

2. Adopt through NGOs instead of Government

OrphanCARE is an NGO that works with the Government, orphans, and families to expedite the adoption process. They are the ones who came up with the brilliant baby hatch idea. OrphanCARE has saved 241 babies, of whom 148 were adopted by parents and 93 biological mothers were persuaded to keep and raise their babies following counselling.

Besides this NGO, there are orphanages and religious institutions where people look for babies to adopt. They are just a Google search away. OrphanCARE organised a tea party for 40 pairs of foster parents and their adopted children.

3. Report to police if anyone tries to sell you a baby

According to Harian Metro, these syndicates have their contacts among people who appear respectable – doctors, government officials and agents (middlemen). They form the convoluted web that runs baby trafficking rings, each one with their own roles to play.

“If we go through these middlemen, they make our job easier because they know the specific stations and branches in the NRD…it’s easier to deal with them.” – Nurul

Bonda, the woman arrested, was caught on tape confirming these allegations: If you are interested in adopting a child, you might come across such characters in your search for a baby. You could report them to the police and save many lives in doing so. Or perhaps you know a couple looking to buy a baby, you could encourage them not to do so.

A baby is a human being, but the way some people treat them are like pets being bought and sold over the internet. If we were to say, what’s wrong if they get to go to loving families, we should be mindful that not every child sold has a happily ever after. So by buying, we are fuelling the selling. Stop the buying and the selling will stop too.

[Psst…if you’re wondering what happened to Penny in ‘The Rescuers’ (that pic of the lil’ girl earlier?), she was one of the lucky ones who had a happy ending. She was finally adopted by a nice couple]