You don’t need to be an economist to see how badly our economy is doing. Oil prices have been going down worldwide and that (coupled with other factors of course), has really taken a toll on our Ringgit.

In a previous article about Petronas, we mentioned that this one company alone supplies 30% of our country’s GDP (and some say 40%). In fact, the oil price drop hit Petronas so heavily that the first half of 2016 has not been kind to Petronas. They announced in August this year that their profits had fallen a staggering 96% when compared to their profits at the same time last year.

So in a time when profits are down, why would Petronas announce that they were reducing their crude oil production? The amount is significant too, reducing by 20,000 barrels a day, which is about 4% of their total current output. At USD54 per barrel, that’s USD1million a day less of sellable goods per day! At a glance this may seem a bit strange right? We should be trying to sell more but we’re producing less?

Note: An earlier of this version used petrol and crude oil interchangeably. But after seeing comments, we realised this made it quite confusing. From here on out, we refer to Petronas reducing their “petroleum“, a broader term which includes crude oil and petroleum products.

Oil prices have been going down for a while now. As far as we can tell, our first mention of oil prices dropping was in an article that we wrote in August 2015.

And you can see that oil prices have actually been dropping since 2014. Image from infomine.com

For a company the size of Petronas (they were reported to have had 53,000 employees at the end of 2015), such a drastic price drop seems to have triggered some a series of unfortunate events.Here’s a brief timeline of the cuts they made over the year: So it does really look like Petronas has been hit hard by the global oil price drop. But still doesn’t make sense does it? If the price of petroleum is low, shouldn’t we be trying to sell more petroleum to make up for the loss?

Actually alot of countries are cutting petroleum production too 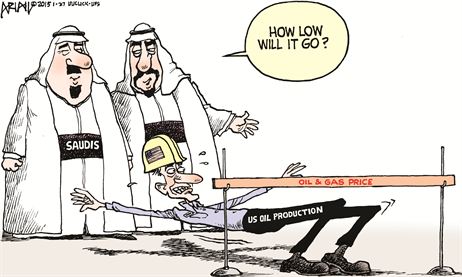 Petronas’ announcement about their reducing their production actually comes right after a whole lot of other petrol-producing countries ALSO announced the same thing. But before we go there, let’s start at the beginning.

The whole idea to cut oil production actually started with an organisation called the Organisation of Petroleum Exporting Countries (OPEC). Back in September 2016, member countries of OPEC agreed to cut oil production among themselves. And a few months later in November, it was announced that they had finalised their agreement, the first time OPEC had done such a deal in 8 years.

But here’s the other thing, OPEC actually only comprises of 13 countries (Wikipedia lists down 117 oil producing countries), and while some of them are among the top oil producers in the world, others aren’t as high up on the list la. Top producers of oil like Russia, the USA, and China (which together with Saudi Arabia and Iran make up the top 5 producers of oil in the world) are not part of OPEC. Heck, even Malaysia is not a member. 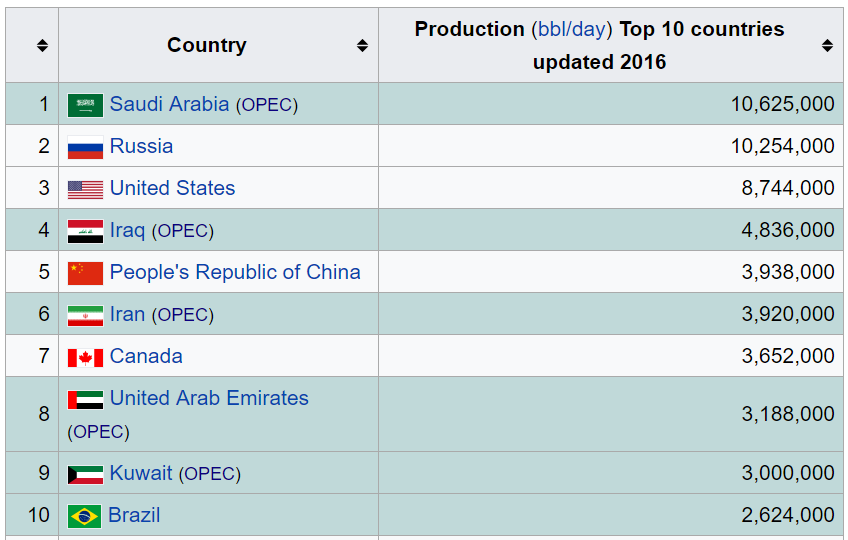 And even though the agreements will result in only a 2 percent cut of the global oil production (reduction of 1.2 million barrels per day) worldwide, it would be seen as a big deal because 2 of the world’s largest producers of oil, Saudi Arabia and Russia, are a part of it. Malaysia’s cut is actually quite small compared to other countries. Image from The Star.

But why are so many countries making pacts that they’v not made in years? Well it seems that many countries have realised that they need to cut down on oil production just to help with the oil situation worldwide. At the moment the world is actually producing too much oil, with the biggest change being from the US massive increase in shale oil production more than it actually needs, and…

NAH, BACA:
Here's why HALF of KL's e-hailing drivers might be disappearing tomorrow

The decision by countries to cut their oil production has actually been met with almost immediate results.

“There is optimism in the market that finally the oil glut will soon dissipate.” – Ali Hamoudi, CEO of Adaa Financial Services in Dubai, as quoted by CNN

The reason for the prices going up seem to have a lot to do with how supply and demand works. We mentioned that the whole agreement to reduce oil production will see a reduction of 1.2 million barrels per day. That actually deals with an oversupply of oil because in the past 2 years, countries have been producing 2 million extra barrels per day.

In other words, we just kept producing more oil than the market needed. And the laws of supply and demand dictate that when supply exceeds demand, the price of something goes down. And to help you understand, here’s a quick reminder about how supply and demand works…using chili sauce bottles: So just imagine CILISOS wants to sell actual chili sauce, and we produce 100 bottles of it for RM5 a bottle. Sadly we only seem to be able to sell 70, so we would be left with 30 bottles that no one wants. What to we do? Well it could come in the form of 2 solutions:

In the case of the petroleum situation it seems the first solution hasn’t been satisfactory. Because there is so much extra oil, the price of oil has been going down because there’s just too much of it.

But what the oil cut agreement does is similar to the 2nd solution where countries have decided to produce less, and hopefully in time, the demand for oil will improve, and then they’ll be able to sell that extra oil that they’ve chosen not to produce yet.

It MAY help Malaysia, but that’s if other countries don’t bail on the pact

In terms of whether this would affect our country, the gomen said no.

“Currently Petronas produces nearly 500,000 barrels (per day), that means it (the cut) is slightly less than 5% (of the total production), so the impact is unlikely significant.” – Second Finance Minister Datuk Johari Abdul Ghani, as quoted by The Sun

In other words, if one of these countries, especially one of the bigger ones, decided that they no longer wanted to cut their oil production, it could affect everyone else.

And people are actually worried. It’s been reported that 15 years ago in 2001, Russia also made an agreement with OPEC to control their oil production, but they never actually did. An analyst from America also said that he was skeptical Russia would follow through this time round as well.

But does that mean Malaysia can do nothing but be at the mercy of these bigger countries? Not quite. We’ve mentioned before in a previous article that we need to be less dependent on oil (our neighbour Singapore has almost none of the natural resources we have, but their GDP is still better than ours). It’s even be said that our oil supply may dry up in 15-20 years.

And though there have been plans to reduce our reliance on oil, instances like this indicate that perhaps the sooner our economy can tahan without oil, the better.

Yea sorry for the 2 High School Musical references in one article.