So we stumbled across this Nielsen survey that puts Malaysia at the third highest globally in terms of car ownership (93%). Not only that, the survey claims 54% of our households own more than one car, giving us the highest global percentage (in yer face, Singapore!). Someone very reasonably disputed the figures, but the survey’s conclusion is still pretty valid for an urban place like Kuala Lumpur, where public transport still can’t lawan our neighbour’s.

Not that our government isn’t trying, but how many of us besides those from the other 7% who don’t own cars are aware of the progress and improvement that have been made? Even if they/you were, are they/you seriously ready to take public transport in KL? Will it be worth going green for? Will it make up for all the tolls and parking tickets you escape? CILISOS presents you six factors to help you decide whether you should hop onto a public vehicle again:

You read right. Plying the city’s streets since 2012 are buses that you expend nothing to get on and nothing to get off – except for some energy in standing because you know they’ll be packed! Besides, the buses have fewer seats in front due to allocations for the OKU (disabled) community, so for the entire duration of the ride you’ll most likely be on your own two feet. At least there are handrails and straps. Dear readers, allow us to present to you – the GO-KL buses:

These buses look like any RapidKL buses except that they’re purple, and they ply the following four routes: Ok, fair, that cost is not the main factor in us not taking public transport, but given the price of cars these days, maybe it should be.

That’s some substantial area covered including office buildings, shopping centres, tourist attractions and transport hubs! Taxi drivers were understandably pissed, though we doubt their protests would be given a fair (pun intended) hearing by either the Suruhanjaya or the public. Even MBPJ has followed suit by introducing a free bus service, to the approval of full-time pedestrians everywhere.

Our country must be filled with many heterosexual male molesters who moonlight as decent civilians if the number of unreported molestation cases ‘reported’ by women holds water. Where the police seems to have just shrugged off, KTM and RapidKL have boldly stepped in by introducing the female-only coaches between 2010 and 2011. Of course, this might not necessarily GUARANTEE a molester-free ride, although we do think it reduces chances by quite a bit. Still, never hurts to keep a pepper spray at hand for extra precaution.

Malaysia’s public transport is rather unique. Because the government asked three different contractors to sort out the trains, the rakyat were rewarded with three lines that had no links to each other.

“As a result, many of the lines do not integrate well, making transferring from system to system inconvenient for passengers. Moving from one system to another often require a lot of walking, stair-climbing, escalator-use and even crossing busy roads. For example, the KL Monorail‘s “KL Sentral” station is a 140-metre walk away through a busy bazaar and a busy road. There is also no common ticket for all systems, forcing commuters on continuing journeys to buy new tickets when transferring.” – Public Transport in KL on WIKIPEDIA.

For instance, at the Masjid Jamek station, everything is under one roof, whereas the walk from the monorail line’s Medan Tuanku station to the nearest STAR line’s station, although also under one roof, brings you past Wisma JobStreet, Maju Junction, Tune Hotels, Sekolah Kebangsaan (P) Jalan Batu, Sekolah Kebangsaan (L) Jalan Batu, and Wisma Sime Darby before you finally pass out at the Sultan Ismail platform.

But look on the bright side: you collapse on pert butt-cheeks with splayed-out shapely legs, plus are spared the daily hazards of weather and road traffic. Studies have shown that taking public transport lessens an individual’s risk in 5 of the 10 leading causes of reduced lifespan. Get your leg muscles from walking. Lucy, pictured above, is an amateur walker and has already popped her public transport cherry in KL. Lucy is at funnie.st

All the same, KL’s public transport is still subject to the operation of Nature and rush-hour jams. Waiting for buses can be excruciating, especially when your destination is only serviced by one bus (e.g. TTDI by U82 or OUG by U73). Add an untimely downpour, and congestion thanks to the 93%, and you can understand the frustration of a 30-minute ride being stretched to over an hour.

Sometimes you can really lay the blame on the operator, like when you watch with ironic bemusement the four T628 buses zipping by when what you’re waiting for is a T629. Your consolation: it provides the wonderful opportunity for you to bring on the Zen, and if sabar tu separuh daripada iman, you’re already halfway to becoming the righteous person your religion wants you to be.

NAH, BACA:
KL still getting hit by flash floods? Here's why it happens

A helpful development is the installation of LCD signboards displaying real-time bus arrival information at several bus stops (e.g. at Bangsar LRT station and KLCC station) so your choice at least becomes informed whether to practise your patience waiting for that bus that’ll take 45 minutes to arrive or spring for a taxi.

Image from The Sun

The train services are more reliable and don’t have to contend with jams, but they do suffer disruptions from some technical reasons (like a psycho crane), due to unforeseeable circumstances (like an overshooting train), or when the city gets flooded.

Ah, the capital of Malaysia, what a sight you are…

From your elevated position, the entire city lies in majestic panorama, with the optional haze, to be taken in with a twinge of aesthetics by your eyes. We can vouch that at least one of us had a magnificent view of Bersih 3.0 in the train, and later on the train platform when the tear gas started mushrooming. And even Bersih can’t be more 1Malaysia than a packed coach of smelly, sweaty (from all the walking) rakyats and pendatangs to make you feel a profound solidarity with the nation. 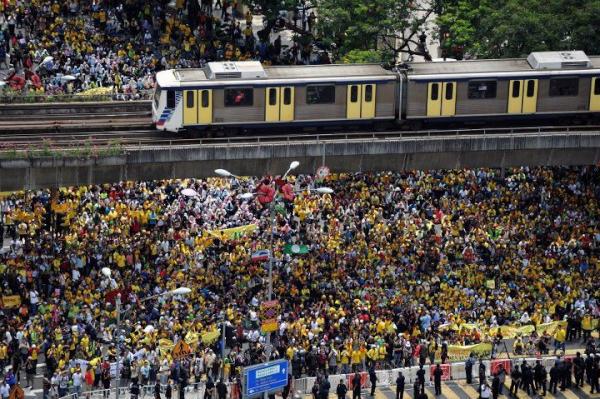 And when the crowd turns sardine and your phone is dead, feel free to turn to your unsuspecting neighbour’s. You can easily glean interesting trivia of humanity, for example the existence of Big Bad Hamsap Wolfie in someone’s Contacts list.

We’re wrong. Nothing’s more 1Malaysia than our Ugly Malaysian experiences. We’ve all gone through them, broadcast stories about them, laughed and cried over them, become united from laughing and crying over them, and best of all, they come in all creeds, races and sizes. Check out the latest viral Ugly Malaysian story, also involving a car!

The Ugly Malaysians that drivers have the pleasure of acquainting themselves with are typically ragers and purportedly female (or vice versa), but on the pedestrian level they’re typically bottle-necked and of all sexes. A theory has it that when passengers enter the coach of a bus or train, they enter a zone that does not conform to the three-dimensionality of the coach, playing magic on their brains to create an optical illusion that makes possible the proposition that the size of human congestion is inversely proportional to the space furthest from the entrances/exits.

What does all the mumbo-jumbo mean? In layperson’s terms, it means passengers love to block the doors. This explains why they (the passengers, not the doors) can remain stationary when there’s a fresh inflow of people into the coach in front of them and ample space behind them, and still curse you when you politely excuse yourself to squeeze into the back. What the passenger in the coach sees looking at the door What the passenger in the coach sees looking at the floor

As for the crowd outside the coach, they suffer momentary amnesia of basic physics and how to form queues, so what you get is people packing into the coach like it’s Black Friday when the doors slide open and in direct warfare with passengers trying to get out.  So what’re the poor exiting passengers to do? They step on feet that don’t toe the line. Hur hur.

Another type of Ugly Malaysians are exclusively on crowded escalators, and this species is not restricted to public transport alone. What distinguishes the public transport variety is their appearance after an indefinite duration during which a train is immobile and before the definite sounding of the warning that the doors are closing, usually right when you are halfway down the steps. Their appearance is always in front of you, and a typical verbal exchange with them goes like this:

You: Then walk faster.

UM: I’m already walking as fast as I can. You so clever you run lah!

He could’ve scooted off to the left, we feel. Really, what is this Malaysian reluctance to stand on the left of an escalator despite the many reminders hanging down/at the sides? Maybe they need escalator police? Has it anything to do with superstition? But we thought it was only with beds. What do you think? Tell us in the Comments section!

And there you have it, six factors. There is another one we considered adding: Beautiful Malaysians, with particular regard to the vacating of seats for the disabled, pregnant and elderly, but cukupla the feelgood articles this month. You guys know it happens, albeit not ever often enough.

Our public transport still has a long way to go to be able to best our more famous neighbour. Perhaps when the MRT is operational (slated at the end of 2016) and stops posing health hazards to drivers, the public transport system in KL would truly deserve to be called the mode of the people’s choice of land mobility. Having said that tho, it’s not bad. And as you can see above, there are plenty of really good reasons to take it right now.