Translated from Soscili.my. To read the original in BM, click here.

*Disclaimer: This article was edited at 8am, 17/05/2017. We previously wrote that Aman Shah Ahmad stole 1 cents from each customer’s account. However, it was reported that he transacted unspecified amounts money into his own account. He was just known as the ‘1-cent thief’.

You’ve heard the peribahasa “sikit-sikit, lama-lama jadi bukit”, the line that parents and teachers always like to use to instill the habit of saving money and all that nilai-nilai murni stuff we learnt in Moral class.

This Malaysian guy applied the same principle, except in a not so moral way. Instead of saving up his own money, he STOLE money from other people, little by little, until he became a MILLIONAIRE! People knew him as the 1-cent thief although he didn’t actually steal one cents. That part of the story is more of an urban myth. If he did though, that would be a more amazing story. Such dedication! Too bad the 1 cent is now defunct, but on the bright side, 5 cents faster to reach 1 million compared to 1 cent. He started out a regular bank executive, until he went for computer training

It began when 25-year-old Aman Shah Ahmad was working at Hock Hua Bank, along Jalan Raja Laut, KL, as a young executive in 1990. (A bit of background info on Hock Hua Bank… it was established in 1951, registered in Sarawak, but then in 2001 it was absorbed by Public Bank.) 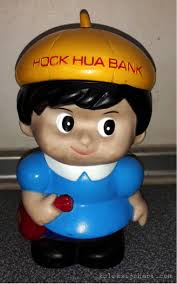 Today this is the only remnant of Hock Hua Bank. Image from koleksijohari.com

Aman was described by his buds as a friendly guy, who liked meeting new people, and loved to joke AAAND he loved fast cars – it was this passion that got him caught later! According to a newspaper clipping, he was Money Market Processing Department Chief, earning about RM1,800 a month. Frankly, it’s quite hard to find information about him on Google, so we relied on old newspaper clippings people uploaded on the internet.

The former accounting student from Universiti Teknologi MARA was quite an efficient employee and soon he was trusted to manage customer accounts. He didn’t dive right into crime at first, but all that changed when the bank sent him for… computer training. It was then that he learned the ins and outs of computer banking and without anyone suspecting, hatched a genius plan that fooled even Bank Negara! Aman Shah after his arrest. Image from carigold.com

Armed with computer knowledge and his new role as head of the department that processed Bank Negara’s Sistem Pemindahan Elektronik Untuk Dana dan Sekuriti (SPEEDS) aka the fund and transfer system, he set SPEEDS to transfer money every day from every customer account in Hock Hua Bank into his own account in Bank Bumiputra. And he successfully did this until he amassed: After Aman became rich from other people’s money, he left Hock Hua Bank to open his own advertising company, Bistro, near KL. So what next? Spend the money, duhh. He chose to park his cash in automobiles. You know, if you save RM10 a day, you could buy a Perodua Axia SE Edition in 10 years… provided prices haven’t inflated by then or they stop producing Axia. But he wasn’t content to buy a modest car, nope it had to be LUXURY cars for him, fulfilling his dream since high school.

The Lambo and Porsche Carrera were specially flown in from London, whereas the BMW 329i was a used car. He paid for all of them by cash. Three of them were unregistered and he didn’t have to pay import tax, while two were registered under his name, and another was registered to his girlfriend, Raha V V Aboo. What an odd name.

Image of Lambo from thrillist.com

To protect his unusual assets, Aman parked his luxury cars at an exhibition centre at Plaza Bukit Bintang and would take them out for a spin whenever he wanted to. He was smart not to park them at his home, or surely the neighbours would start asking questions.

As if that wasn’t flashy enough, he appeared on national TV

We could only find the opening sequence of Sekapur Sirih, not the episode with Aman in it. Screenshot from Khairul Hazim Zainudin on YouTube

This guy’s bravado knows no bounds. You would think if he was careful not to keep his 6 luxury cars at home, he would be careful not to appear in the limelight, but when TV3’s talk show Sekapur Sirih invited him to the programme, he agreed to go on.

In that episode, he talked about his fancy rides. As it happens, his former manager at Hock Hua Bank watched the episode and that was the beginning of the end of his dream life, dun dun dunnnn. Immediately, Mr. Manager (he’s not named in the newspaper report) smelled something fishy about Aman’s lifestyle, so the following day, he did some internal audits and was shocked by what he discovered – RM4.1 million disappeared from the bank customers’ accounts. The Sessions Court found him guilty of criminal breach of trust under Section 408 of the Penal Code on seven occasions, between 26 January to 27 March 1990. Judge Haji Muhammad Noor Abdullah sentenced him to five years jail. By this time, Aman was 26 years old. Throughout the court trial, he chose to remain silent and he appeared calm when the sentence was read. The small courtroom was packed with his family members.

In defending him, Aman’s lawyer Muhammad Shafee Abdullah said his client was not himself ever since he got into an automobile accident in 1989, where he sustained head injuries. “According to his father, after recovering from his accident Aman Shah entertained grandiose ideas of owning a jet plane.” But then his friends said he memang liked fast cars from high school though.

After he was arrested he couldn’t even post bail Sadly, with all the wealth he acquired through criminal means, Aman couldn’t even post bail which was set at RM200,000 by the judge. Finally he was sent to Pudu Prison (now demolished).

“Most young people tend to show off if they hold responsible positions. They are attracted to ‘glamour’ like moths are drawn to light and it is no surprise that some of them come to a sad end. Aman Shah’s mentality and personality are that of a young person. He held a responsible post in the bank and he wanted to show off.” – Judge Haji Muhammad Noor in this newspaper clipping

This case was the talk of the town in the 90s, but we don’t know what happened to Aman after that. No news of his release from prison after five years.

He is not the first and only bank personnel to have stolen from his workplace. Bank Negara clerk Harun Osman was jailed five years and fined RM50,000 for stealing RM22.2 million in May 1989. A lagi high profile case is the one of former Bumiputra Malaysia Finance (BMF) Chief Lorrain Esme Osman who was charged with 39 counts of fraud and corruption relating to US$800 million (RM2.5 billion then) between December 1979 and October 1983. He served only one year in jail. Moral of the story is, if you wanna commit a crime, don’t boast about your riches on TV. -_-“