If you’re not Chinese, or have few to no Chinese friends, chances are there’s not a whole lot you know about the Qingming Festival. You may have heard OF it (since we, as Malaysians, have memorised all the holidays/festivals in our calendar), and you may have noticed the traffic jams and people burning hell money during this date, but have you ever wondered what that little date marked ‘Qingming Festival‘ is about?

If you don’t know what that is, no worries, you’re not the only one. In fact, when we asked our BM editor what he knew about the Qingming Festival, he responded with:

“Absolutely nothing. That’s the first time I’ve even heard of it. But I do have a friend named Ming Cheng la…” – our blur BM editor 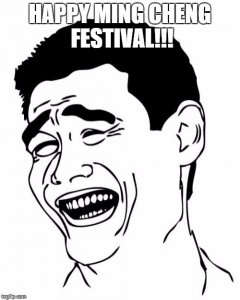 Sooo yeah, it’s one of the lesser known Chinese festivals celebrated in Malaysia, but it is still very significant. Let’s take a closer look at how it came to be and how people today practice it… Let’s start with the most burning question of all…

1. How did QingMing start? (HINT: it started with cannibal soup)

The origin story of Qingming is an interesting one. It begins where everything else began: in China. A long, long time ago, during the Spring and Autumn Period, there lived a guy called the Duke Wen of Jin. Duke Wen of Jin was a prince who was force to exile to the mountains because a concubine framed him for rebellion.

Of course, being in the mountains = no food, so they had to puasa for a very long time. One day, one of Duke Wen’s officials named Jie Zitui brought him some soup, which he enjoyed. Duke Wen wanted to know where he got the meat to make this soup. It turns out that Jie had cut some flesh off his thigh to make soup for Duke Wen (ouch). When the Duke found out about how it was made, he was so moved by Jie’s loyalty and promised to reward him for the delicious sup paha manusia. Duke Wen of Jin, a.k.a ‘The Accidental Cannibal’. Image from: wenming.cn

Soon, the evil concubine died and they moved back to the kingdom, where Duke Wen became king. However, he completely forgot about Jie. When he finally remembered, Jie had already merajuk-ed and moved to the mountains. So, the overly-attached Duke Wen burned the mountain to fish him out, accidentally killing him in the process. Duke Wen felt so much regret that he ordered his people to hold a memorial ceremony for Jie. This ceremony would become what we know today as the Qingming Festival.

The Qingming Festival is also known as the “Tomb-Sweeping Day”, so this is when families visit the graves of their dead ancestors to pay their respects and do some gotong-royong. It’s considered a major national holiday in China, Taiwan, Hong Kong, and Macau, however, it’s not really seen the same way in Malaysia, hence why there’s no public holiday (it’s ok, we feel your pain too). Qingming in China. Just imagine the traffic jams there. Image from: cultureworkstheschool.com/www.news.cn

However, Qingming is very important in Chinese culture, and it is practiced once a year by the Chinese community in Malaysia. Traditionally, the process goes like this:

3. Why got soooo many types of money being burnt? Some of the things to be burned during Qingming, such as paper gold ingots, money, passports, and joss sticks. Image from: the-mondo.com

According to this article we found on ebay, there are 3 types of money commonly available

Actually in Malaysia, it’s mainly similar to our economy lately, cos all we see is Hyper-Inflation money. We can only imagine how much a bottle of mineral water costs our poor kungkung. Better send him more 🙁

This practice dates back arguably as far as 1600 BC, where archaeologists found evidence of imitation metal money in Chinese tombs. With the advent of paper money in China somewhere around the 9th century, people started to burn paper currency instead, thus giving birth to the first ‘spirit money’. This system is similar to the Catholic concept of ‘Indulgences’, which was popular in Europe at the time of the Enlightenment Age.

Basically, if you burn offerings for your dead ancestors, they’ll watch over and bless you in return. In other words, something that Malaysians might be quite familiar with… ‘you help me, I help you la.’ This belief stems from the Chinese-Taoist notion that the spirits of people who die continue to exist, and even have power to influence what goes on in our dimension.

Oh and make sure you don’t forget to write the names of the recipients so they are ‘Pos Laju-ed’ to kungkung and not some stranger. It’s not just hell money either – your kungkung will need hell passports, paper clothes, paper phones, paper houses… basically, if you can make it into paper, you can send it! The Qingming Treasure Chest to store all your offerings for easy burning. We prefer calling it the ‘Care Package’ though. Image from: kenwooi.com

In fact, one of our previous articles was about some of the crazier things Chinese people have burnt for their ancestors! Go check them out!

4. Is it always the same moustache uncle on all the hell money?

Usually the face printed on the hell bank notes is Yu Huang a.k.a The Jade Emperor. Basically he’s a kindly Chinese leader who whacked a demon bad guy and landed himself a sweet gig as the boss of the afterlife as a reward. So, much like how the US dollar bills have their Presidents on them, it only makes sense that the hell bank notes have the CEO of Chinese hell printed on them. A Hell bank note, featuring Yu Huang on its face. Image from: https://asienfan.wordpress.com/hell-money/

However, Chinese people around the world have taken a more liberal stance on who appears on the hell bank notes in recent years. In fact, remember how we said there were also political notes? You can even get hell bank notes featuring actors like Marilyn Monroe and James Dean; or even world leaders like JFK, Ho Chi Minh, and Stalin! And as we mentioned before, since there is no set format to follow, issues such as what to burn and the amount you burn are really up to you. However, it is viewed as a sign of wealth if you burn more, and of course, the more you give, the more you should get, right? Image of Qingming kites from Cultural-china.com

Actually, there’s nothing we can find about going in the morning, and some of us have asked our old folks before – the general answer is that

Surprisingly, in China, they even fly kites in the evening during Qingming, so perhaps you should share this article with your parents? ANYWAYS, if they still insist on morning, there’s another alternative… An online shrine. Note that the user can set the background to many locations across the world. Image from: blog.wsj.com

Yes, even the Qingming Festival has gone online. For some families, it’s not such a simple thing to have to travel long distances (don’t forget the headache-inducing traffic jams), so now there’s the option to carry out the Qingming activities via the Internet.

Work commitments preventing you from traveling? No worries! Set up a Facebook account or upload a YouTube video to pay your respects without having to spend a single hell dollar!

In fact, you can even buy ‘online tombs’, where you can select the background of the tomb location, and dedicate virtual offerings such as flowers, candles, and incense. All of these can be bought with the use of online currency, which users can buy using real money. This is one of the biggest perks of such a system: it provides a greener, more environmentally-friendly alternative, since no actual burning is involved.

Some have applauded this shift online, saying that it would be more convenient for families, especially those who stay far away:

However, some of the more conservative observers of Qingming have criticised this new trend, saying it strays away from traditional values:

“It is difficult for me to accept the online memorial, because we need to formally show respect to our passed-away relatives, visiting their tombs and bowing to their portraits, rather than just clicking a mouse.” – Tang Bingling, 73

Oh, and while we’re on the subject of electronic alternatives, some have even ditched offering cigarettes to the dead, instead going for a trendier, slightly healthier option: But my questions still burning. Why so many different ways of doing things one!? Since Qingming has no specific rules to follow, there will obviously be certain differences from one family to another when they go out to perform it.

The main difference is that with religion, or at least organized religion, there is a central doctrine (like the Bible) to follow, and eventhough people might interpret it in different ways, they won’t run too far. However, with traditions passed down from generation to generation… But regardless of the method or the innovations that people bring to the festival, the key tenet of Qingming is retained, namely the act of paying respects to one’s ancestors. So if next year you wanna remember how to do it… at least we have an article now you can always refer to.

PS: Speaking of which, if we got anything wrong, please don’t curse our ancestors. Just comment, it’s easier :))