After watching an exciting football game at a mamak in Shah Alam, Aminulrasyid Amzah and Muhamad Azamuddin Omar paid their bill and got into their car. Aminulrasyid unlocks the door to his sister’s Proton Iswara Aeroback, slides into the driver’s seat, and starts the engine. But there’s one problem-

Aminulrasyid and Azamuddin are both 14 years old. 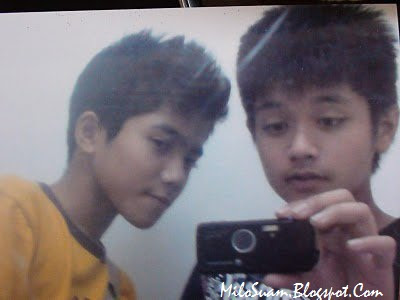 This photo was taken the night of the incident. Aminulrasyid’s on the left, Azamuddin holding the camera. Image from Milosuam.

Very carefully, Aminulrasyid guides the car out of its parking space – his mother and sister would go ballistic if they find out he took the car out without their knowledge. But still he was inexperienced, and there was a shrrrk as his car scraped against another car on the way out. Shaken, Aminulrasyid’s only thought was to head home, where he could safely figure out what to do next.

Perhaps due to his inexperience, his shaken state, or perhaps even both; Aminulrasyid also scraped against a motorbike on the drive home. The motorcylist had friends. He panicked. The motorbikes started chasing the Proton Iswara that just hit their friend. And Aminulrasyid did the only thing he could think of – – – He sped up. He drove as fast as he could, and when the motorbikes gave up after one of their own friends hit a car during the chase, someone else took notice of the white Proton speeding down the streets of Shah Alam.

Constable Mohd Hafizd Mohd Yusoff was on regular patrol with his partner Corporal Jenain Subi when Aminulrasyid’s car zoomed past them. They quickly sprung into action, flipping on the police siren in an attempt to figure out what was going on. 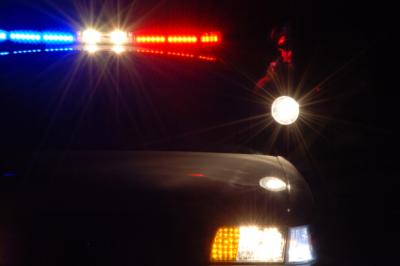 Back in the Iswara, Muhammad Azamuddin couldn’t believe how their night out was turning into a vehicular nightmare. He asked Aminulrasyid to stop. It was the cops. You have to stop for the cops. But Aminulrasyid, who had been quiet all this time, told his friend was that he was more afraid of his mother than the police. All he could think of was to go home and explain everything to his mother. And that was when they heard the pop-pop-pop of bullets piercing their car, followed by a louder pop as the tyres blew out from the gunfire.

Back in the patrol car, Constable Hafizd was focused on tailing the Iswara. It zoomed right by a few red lights, but thankfully the roads are empty. Out of the corner of his eye, he sees Corporal Jenain preparing his H&K MP5 submachine gun. Corporal Jenain sticks the gun and the upper left side of his body out the passenger window, using his right hand to balance himself; his right knee rested on the seat. He lets out a series of shots.

The Iswara slows down from the bust tires, but it’s still moving. Corporal Jenain fires again. After the second round of shots, the Iswara skids and crashes into a wall.

It’s 2am. Aminulrasyid is in the driver’s seat

He’s slumped over Muhammad Azamuddin’s lap, dead from a bullet wound to the back of his head; his foot still on the accelerator pedal. Muhammad Azamuddin climbs out of the passenger window and falls into a drain, four other police officers arrive and assault him, but he manages to escape and make his way to the nearby police quarters where he lives – his parents are police officers.

Unfortunately, this is a completely true story 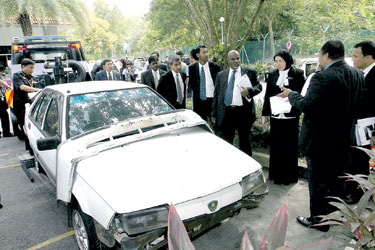 The Iswara driven by Aminulrasyid. Image from MySumber.

It might sound like the plot of a TV action movie, but this is the collective story from the court testimonials of Muhammad Azamuddin, Constable Hafizd, and Corporal Jenain reported by the following sources: | The Star | The Sun | Malaysiakini | AsiaOne | and Latheefa Koya, one of the lawyers representing Aminulrasyid’s family.

When this tragic account was reported in the news the next day, many members of the public were outraged over the excessive force taken by the policemen to stop the car. It also caused quite a bit of debate, with others speaking up in support of the police. After all, wasn’t Aminulrasyid guilty of driving without a license as well as putting the lives of many other people in danger?

But as the months went by, people eventually forgot about the incident as they moved on to other things to rage about. Well, everyone except for Aminulrasyid’s family that is. Aminul’s sister and mother at a press conference. Image from The Star.

One important thing to note is that the crime committed and the actions of the police are legally two separate cases, meaning that even if a person was found guilty, he could still file a lawsuit against the police. So in this sense, the question here isn’t so much whether or not Aminulrasyid was guilty, but whether or not the police were justified to shoot at the car.

At the time, IGP Khalid (who was the Selangor Police Chief at the time) told the media that the cops reacted accordingly because: Latheefa tells us that for point (1), not only did Corporal Jenain fire at least 21 bullets at the car (which is excessive), but also that it went against the Inspector-General’s Standing Order (IGSO), an internal guideline for Malaysian policemen. We don’t have a copy of it since it’s an internal document, but it was produced during the court trial. Here’s what Latheefa says:

“Patrol cars are given various ways of stopping a vehicle, such as using their own cars [as a ram]. They can only use firearms if a life is in danger, and it’s very clear that the Aminulrasyid incident was not such a case” – Latheefa Koya, in phone interview with CILISOS.

We also pointed out the word “allegedly” for points (2) and (3) because IGP Khalid was also given the chance to explain those points in court, but he didn’t show up. In fact, the court found IGP Khalid guilty of misfeasance – which is a fancy term for a person abusing his position to make the victim look bad – and ordered him to pay Aminulrasyid’s family RM100,000 in damages. We think it was probably because they suddenly realized that police training doesn’t include x-ray vision to see hidden weapons in car trunks  😕

After many disappointments, Aminulrasyid’s family were given a (bittersweet) victory Corporal Jenain leaving the courtroom. Image from The Sun.

As you can imagine, the past 6 years have been quite painful, particularly for Aminulrasyid’s mother; who didn’t only lose a child, but also saddled with the burden of proving that her son wasn’t a criminal.

Not just that, she was also dealt a disappointing blow when the High Court overturned the initial 5-year prison sentence against Corporal Jenain in 2012.

“As the mother, I want a commensurate punishment meted out against the accused because my son was not a criminal, he only did not have a driving licence in the incident … I am very sad as the death of my son did not receive the appropriate defence.” – Norsiah Mohamad, Aminulrasyid’s mother, as quoted by Malaysiakini.

However, they did gain a victory in March 2016 when the High Court awarded the family RM414,800 in damages, while also finding IGP Khalid guilty of misfeasance (mentioned earlier). This judgement can be seen as indirectly clearing Aminulrasyid’s name – that he isn’t a criminal as portrayed by the police.

We call it a bittersweet victory because… We should probably note that on his end, Corporal Jenain publicly apologized to Aminulrasyid’s family. However, he was the only who did. IGP Khalid has refused to apologize or resign, saying:

“Why should I apologise? I will not apologise. Everyone wants me to resign. But they are not my boss.” – IGP Khalid, as quoted by The Malay Mail Online.

Even more telling, the previous IGP at the time of the Aminulrasyid incident responded to criticism by threatening to take policemen off the streets:

“If you do not want the police to enforce the law, then say so. I can tell my men to not take any action, including to conduct inspections on vehicles or arrest Mat Rempit (motorcycle gangs) who ride without licence,” –  Tan Sri Musa Hassan, then-IGP, as quoted by The Star via HereTheNews.

But it’s not just the totally non-PR responses that’s an issue, but the fact that in cases which where the police might in the wrong, the ones investigating them are the…..polis. We’re not saying that our police force is bad, but the questionable appearance of the parang in the car and why the clothes sent for forensic analysis were different from those in the crime scene photos bring about many concerns in the polices’ fairness when it comes to investigating themselves, which begs the question…

Should there be an independent body to investigate the police? In his memory, his family and a few NGOs are holding a public forum on to highlight the need for an independent body to investigate the police when it comes to negligence or abuse of power.

Because, even before the Aminulrasyid case, a single mother named Norizan Salleh was kicked and stepped on by the police after being shot five times in a police roadblock. Her crime? Nothing. Worse still, the police didn’t even investigate her accusations of attempted murder, saying:

“It depends on the wisdom of the police. If a madman lodges a police report, should we investigate?” – ASP Tan Chek Yang, as quoted by The Malay Mail Online

There’s also the case of Kugan Ananthan, who died of so many injuries in the 5 days he was detained by the police that even the court refused to believe that they were all inflicted by one police officer. And these are all the tip of the iceberg in a long series of police abuse cases which have been highlighted by various human rights organizations.

The forum will take place on Tuesday, April 26th 2016 – the 6th anniversary of Aminulrasyid’s death. Again, it’s a public forum so if even if you can’t make it, do share it (or this article) around for anyone else who might be interested.