In the 1940s, Southeast Asia wasn’t a pleasant place to be. We’ve all heard of the atrocities of the Japanese soldiers in Malaya during the World War 2, and the sufferings of Malayans during that time under the Kempeitai rule. But some stories are more tragic than others, and here’s the story of one woman who suffered under the Japanese in two countries.

What’s more unusual, was that she was white. Most of our story was taken from Andrew Barber’s book Kuala Lumpur at War 1939 – 1945.  There’s also a whole other book about her. Image from Star2.

Doris started life in Adelaide, where she came from a broken home and had a rough upbringing. Her first marriage ended in a divorce and eventually lost contact with both her daughters as a result of it. However in the mid-1930s, she married another guy, Phillip van der Stratten, a Malayan Eurasian and a mining engineer. And when he got a job posting in a mining company in Thailand, she took the opportunity to follow him to the Pinyok tin mine located in the southern part of the country.

However, all that changed in December 1941, when the Japanese started their long march to Malaya, while invading Burma and of course… Thailand. In Pinyok. all the orang putih (British, European and Eurasian) at the tin mine were rounded up by the Japanese and driven to a wooden bungalow in a place close to the mining site called Kampung Toh. A few days later, the Japanese soldiers attacked them in the bungalow. They threw two hand-grenades into the living room and opened fire from underneath the bungalow, killing most of them. The ones that managed to escape, scattered around the area and Doris was one of them. Assuming her husband was dead, she ran and ran, and eventually teamed up with another survivor, the Assistant Mine Manager, Edward Peters, deep in the jungle.

Then they walked through the jungle all the way to Perak. Without shoes.

After the Kampung Toh massacre, Doris and Edward walked hundreds of miles through the jungle without shoes until they got to Malaya and found refuge among a small Chinese community who was also hiding from the Japanese in the Perak jungles. But it came with risks because apparently the Japanese were offering rewards to informers. Unfortunately, the conditions were brutal (I mean it’s the jungle la right) and they suffered from beriberi, dysentery and fever.

In fact, they were SO exhausted and ill from the whole experience, that they turned themselves in to the Japanese. Doris was put in the Taiping Prison, and found that the other people who escaped the Kampung Toh massacre was there too. Earlier on, she was offered to be moved to a nearby Convent of the Sisters of Mercy since she was the only female prisoner but she chose to stay because she was receiving proper medical treatment. And she also had a source of support which was a group of Catholic La Salle Brothers that were jailed at the same time. The Taiping Prison during the early 1900s. Image from huctan.blogspot.com

Doris eventually caught the eye of Colonel Koda, a senior Japanese military guy who was responsible for operations in Taiping. He arranged for her to be transferred to the Taiping hospital after seeing her in prison. This was when she was separated from the other prisoners, so when they were eventually transferred to the Pudu Prison, she wasn’t with them. Sometime in late 1942, Colonel Koda moved to KL where he became the commander of the ‘Western Garrison’. He then arranged for Doris to be delivered to his colonial villa in KL, where she stayed and became his mistress. It’s not Majestic hotel but she probably stayed in a colonial house like this; which btw it’s quite rare to see in KL already. Image from NST

However, the was a high suspicion of foreigners being traitors. Because of this, Cnl. Koda had to publicly claim that Doris was Italian. Why Italian? It’s coz the Italians were Japanese allies (both were Axis powers) during World War 2. In fact, Cnl Koda wasn’t exactly a by-the-books loyal soldier of the Japanese Army, allegedly embezzling money from prisoner’s rations. The Kempeitai became highly suspicious of him at this point, after receiving reports of his alleged devious ways, and looked to his mistress for answers. The Kempeitai was the most feared unit in Malaysia. Image from Pinterest

NAH, BACA:
Actually right... Why did the Japanese use bicycles to conquer Malaya?

And Doris’ tragic story comes to a tragic end. Doris was then arrested and taken to the Kempeitai headquarters at the Lee Rubber Building where she was handed to Lieutenant Shuzi Murakami for interrogation. The Kempeitai headquarters where Doris was murdered, along Jalan Tun H S Lee in KL. Image from Pinterest

It being a closed environment, the only evidence was from a court document from the trial. The testimony given by Sam Ah Ngaw, an interpreter that was present at the time of the murder, stated that Lieutenant Shuzi Murakami physically abused her to get answers. At the start of the interrogation, Murakami accused her of getting military info from Colonel Koda, and she obviously denied it because she wasn’t a spy! She refused to reply any more of his questions, so he grabbed her from her seat, slapped her, and kicked her in the shins. She was so brave that when she couldn’t tahan anymore, she YELLED at Murakami…

Murakami apparently went absolutely berserk after she fought back verbally. He then grabbed her by the dress and threw her out the window, head first, ending Doris’ tragic story. Screenshot of The Straits Times, 2 July 1946. Image from NewspaperSG

But our story goes on for a little more. In 1945 towards the end of the war, a War Crimes Court was set up and Murakami went on trial after he was tracked down. At the end of his testimony, Sam Ah Ngaw said that he was coerced by Murakami to cover up the murder as “SUICIDE” but Murakami’s defense counsel argued that Sam Ah Ngaw made up the story to save face. This case was so controversial that it made the news in Singapore.

Here’s the kicker, at the end of the trial Murakami’s defense counsel’s argument was that Doris committed suicide to protect her lover, Colonel Koda, because he took her in when she was widowed and alone with no support and that he had given her what ever she wanted in life. The defense counsel made another statement following their argument saying…

“Suicide was the plan of Mrs Stratten to save Colonel Koda. Murakami might have been morally responsible for her death but not legally and therefore he should be acquitted” – Murakami’s defense counsel, quoted from Andrew Barber’s book, Kuala Lumpur at War 1939-1945

The next day, the verdict was out. Murakami was found NOT GUILTY and was released a free man, who then returned to Japan after the trial was over. If you thought this story couldn’t get any weirder….

Remember how initially Doris thought her husband died? Yeah, Phillip actually survived the Kampung Toh massacre. It’s weird because this was only known during the time of Murakami’s trial, after Doris had been killed and not at the time when she was Colonel Koda’s mistress.

At least Doris’ story saw the light of day. Other comfort women aren’t as ‘lucky’

In Doris’ case, it was really unusual for a white woman to be a comfort woman during the war, and a specially requested one at that. The Japanese brought the ‘comfort house’ system of military brothels where ever they went during the war. Kuala Lumpur itself had a large number of comfort houses. A large villa in Jalan Ampang was used as a “training centre” and a place to “break in” new girls. 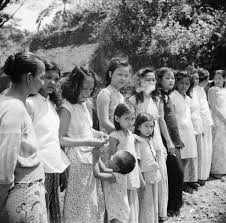 Comfort women from China and Malaya. Image from Wikipedia

After the war, these women had the need to hide and cover up their involvement with the Japanese. Later on when former confort women in other countries wanted their stories heard, the women in Malaysia that went through it wanted their stories to be heard as well. According to Andrew Barber, MCA reportedly received many letters  following an appeal for testimonies but the matter was allegedly suppressed by the authorities.

So, the true extent of what these Malaysian women experienced would now never be properly heard.