Cried a lot of tissues for this one… GIF – Grave of The Fireflies, Studio Ghibli

But did you know the fireflies in Malaysia are the BIGGEST in the world? (More on this later.)

And I know what you’re thinking… Fireflies + in Malaysia = Kuala Selangor right? WRONG. You can meet these jumbo fireflies right here in the city this weekend! But first, let’s tell you a bit more about fireflies:

Why are there so many fireflies in Malaysia? And why are they so big?

First off, did you know that fireflies have been around longer than humans? That’s because fireflies come from the order of Coleoptera (aka beetles), which evolved around 145-66 million years ago. Basically it’s older than you, me, our grandmothers, and our entire extended family combined la. But why do they live in Malaysia?

For that, we asked Sonny Wong, a conservation officer at the Malaysian Nature Society, which holds the title of the oldest NGO in Malaysia! Sonny has been studying the conservation of fireflies since the 90’s… and this is what he says:

“Fireflies generally are very diverse in the tropical regions due to humidity and warmer climate which means they breed faster and there is also the availability of food (invertebrates) for their larvae.” 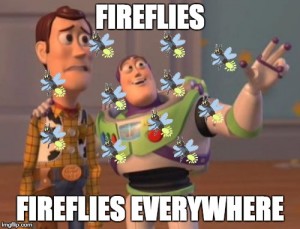 At least they’re not flies…

Basically, they like to makan just like us… And the more food that’s around, the faster they make babies and the faster their babies will grow. We guess we never knew Malaysia was a food paradise for insects too! Not only that but our weather is very much to their liking…

“Malaysia being a tropical country will have a high diversity of fireflies, compared with temperate countries.” – Sonny W.

That’s right! Like Thailand, Malaysia has a climate that’s very suitable to not only vacationing tourists, but also to most firefly species, which means we have different different types of kelip-kelip, lightning bugs, and fireflies living here in harmony… 1Malaysia mou?

So the question remains… Malaysia has the largest fireflies?! Sure or not?

Well see, there are 2000+ species and 100 different genuses of fireflies in the world. A large variety of them live in Malaysia, including the Lamprigera genus which are known for their size. Here’s what Sonny said about our fat, flying friends (not the tourists)…

“Yes, the largest firefly to date is from the Lamprigera genus. They can be found in China, Taiwan and ASEAN countries. Specimens of the larva from Indonesia can reach 13-14cm long. But in Taiwan, this firefly is much smaller than in Malaysia.” – Sonny W. via email

Isn’t that interesting? In fact, people travel from across the world to photograph our fireflies!

Like this guy, Radim Schreiber. He was a nature photographer who came all the way from the USA to capture pics of the Lamprigera fireflies here in Malaysia! Photo from his website, fireflyexperience.org

However, it’s hard to find additional information about fireflies in Malaysia because there are very few people doing firefly research according to Sonny. Of course la… We’re pretty sure not a lot of kids put down “insect scientist” as their ambition in primary school. Now who else wanted to be an astronaut?

However, you may be surprised to know that Malaysian scientists actually play an important international role in protecting and conserving fireflies! Back in 2010, the 2nd International Firefly Symposium was held in Selangor and made an agreement to save fireflies, which was called the Selangor Declaration. It was organized by the Forest Research Institute of Malaysia (FRIM) and the Malaysian Nature Society (MNS) and attended by partipants from 13 countries. This included scientists and NGO’s, and even members of government agencies, as well as firefly enthusiasts (a.k.a. fireflyers).

Cool right? Betcha didn’t know we were so gungho about protecting our cute glowing bugs! But of course, now you want to know how you can see them for yourself. No need to go all the way to Kuala Selangor cos…

You can see the biggest fireflies in the world this weekend at Bukit Kiara @TTDI!

Okok technically you can see it on most nights between 8pm – 10pm when fireflies are most active, BUT we found a post on a guided walk this weekend: Together with the Malaysian Nature Society (MNS), Sonny Wong, the firefly expert, will be leading a firefly walk in Bukit Kiara this coming Sunday night (July 23rd). The rendezvous will be at the first (lower) guardhouse at Jalan Changkat Abang Haji Openg, TTDI.

Bukit Kiara, which is located right in the middle of the city, is home to many exotic and endangered creatures such as hornbills and the now femes Lamprigera fireflies! Emphasis on the word endangered la… So please make sure you act responsibly while you’re there.

The firefly walk will start at 7.30pm and will go on until about 10pm… So make sure you got food and water to last the whole trip … Or else you’ll stay back to feed the exotic animals by yourself… 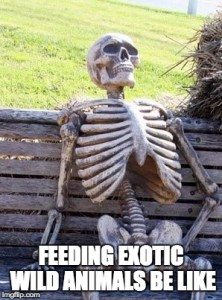 Pretty sure there are no man-eating predators on Bukit Kiara, but you never know…

Strap up with a good pair of hiking shoes because you are going to walk for a damn long time in the dark. If you’re feeling extra rajin to take notes you can bring torchlight to help you do so, but make sure you follow the guidelines below. The torchlight can also be used for emergency… Like if someone went missing, or you dropped your car keys la (more likely)… etc.

But don’t go without any preparation k? Some tips for participants include:

Red light is the least likely to disturb fireflies and also the glare won’t distract your fellow nature walkers. So covering your torchlights with a filter would be a good thing to do before embarking on your romantic firefly adventure! Any red plastic or paper will do… 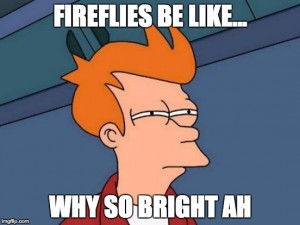 Remember to cover your lights with RED FILTERS!

Also since you can’t use chemical insect repellents, a better choice is to just wear long track pants or sweatpants that are both comfy and serve as a physical barrier to mosquitoes. And remember we said there were some endangered species there? Turns out…

A blog post from 2005 had shockingly claimed that there were no more fireflies in Bukit Kiara. The blogger may have been unlucky…because new sightings have confirmed that they are still there. But the threat of fireflies one day being gone forever is subject to the preservation of their habitat. As Sonny Wong puts it…

“What we know is that most firefly habitats are being threatened at the moment, as fireflies are quite site specific. If you cut down a patch of forest and the fireflies will be gone without even being described by science. So firefly habitat conservation will protect fireflies (known or unknown fireflies).” – Sonny W. via email

In other words, by destroying their habitat we could accidentally kill off an undiscovered species of firefly without even knowing it! Urbanisation poses a threat to fireflies because of light pollution, insecticide use, and no suitable place to hatch their young.

Because Bukit Kiara is located right in the middle of the urban landscape, it is known as the green lungs of the city. However, that doesn’t stop the city council from trying to develop this area, despite protests from the residents themselves.

Malaysian Nature Society (MNS) is organising this walk with the goals of helping people appreciate the natural wonder and diversity that exists in Bukit Kiara. Through the soothing blip of a single, courageous firefly.

“We can use this as an iconic insect to save Bukit Kiara. And get people to do night walk in urban forest and enjoy the fireflies. And also want to highlight the problems faced by the fireflies.” – Sonny Wong, on behalf of MNS

See you there! This writer will be joining the walk, and will update this article soon upon his return.

Share this article:
NAH, BACA:
The curious case of the World's #1 Scrabble player - an NZ man who plays for Malaysia.