[This article was first published in May 2017.]

So our friends at Flipit asked CILISOS to speak to fashion experts to tell us how traditional Malay dress has evolved over the years. They told us some really interesting things… while some types of clothing have recently hit the market in Malaysia (ie. jubah from the Middle East, and the kurta from India), traditional clothing has not phased out, instead, they’re updated. Since Ramadan is coming, we wonder what new trends we’ll see in 2017.

Some of you are probably no strangers to Flipit #shopaholic. They are a site that curates discount codes, offers and promotions for online shopping platforms (think Zalora and Lazada). Yeah, these guys literally trawl the internet to find the latest and best coupon codes and promotions for Malaysians.

All you need to do is copy the code, paste in into the promo code column at the checkout, then your total bill will be discounted. And Flipit doesn’t just have fashion coupon codes. They have codes for food, transport, travel, beauty, electronics, gifts, sports stuff and more! Now that know, you’ll never want to shop online without going to Flipit’s page first.

And now, baaaack to the story…

1. From baju Melayu… to jubah and kurta Before the evolution of Malay fashion, men’s fashion in the 80s consisted of the traditional baju Melayu (the square, boxy shirt, with the pesak and kekek), up until the 90s and 2000s, related Ardi Idewani, Fashion Editor at Stail.my and former Deputy Fashion Editor at Glam Lelaki. But now, the baju Melayu is getting an update! 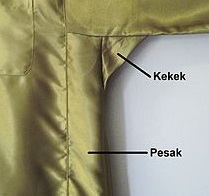 Pesak and kekek. Image from Wikipedia

“We can thank KL Fashion Week for sparking the growth in the number of menswear fashion designers. These new generation designers and brands are quite daring in changing the norm of baju Melayu, those like Zakwan Anuar, Joe Chia and Silas Liew. Some of them changed the baju Melayu to look more like a shirt, removing the pesak and kekek.” – Ardi Idewani, Fashion Editor at Stail.my told us over the phone

Recently, we can also see that the trend in Malaysia is Arab fashion. Designers such as Rizalman are known for bringing Arab influence in, like the jubah and kurta (a knee-length top), said Ardi. In fact, even jubahs have evolved from plain white robes, usually worn by the ustaz, to fashionable colours and designs that appeal to young Malaysians. We’ve been seeing some crazy stuff lately, like Abang Sado and Polo jubahs, though they may not be to everyone’s taste. Silas Liew  (left) and Joe Chia. Not at all like the baju Melayu, but still modest. Image from The Star

Despite this, Malay headwear hasn’t seen much change over the years…

“When it comes to headwear I don’t think there’s a lot of options. Songkok is the only one I’ve seen still standing strong in the evolution of baju Melayu. But some people wear the tengkolok because they want to go back to the Malay roots.” – Ardi 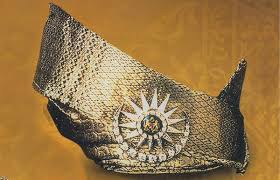 2. From tudung labuh… to turban

If there is one thing that sets Muslim wear apart from others, it is the hijab. Once a symbol of modesty, the hijab is no longer just to tutup aurat for Muslim women, as we see it shifting towards being a fashion item.

“It doens’t mean if you wear shawls, you’re not as fashionable or as trendy as other people. People can still work their style if they wear a shawl.” – Hafeez Izmal, Co-founder of Heart & Shawl told CILISOS on the phone

Gone are the days of the old-fashioned tudung labuh like cikgu used to wear. You can fold it this way, you can pin it that way, there are tons techniques and styles to the modern hijab, like Yuna who rocks turbans. A woman only has to watch YouTube tutorials for inspiration, something that was not available in the pre-internet days. Chiffon and satin materials and pastel colours are rocking the hijabista world, where previously bold, vibrant colours and heavy materials were more prominent, described Hafeez, whose own collection of hand-painted batik shawls set Heart & Shawl apart from other brands. (Oh yes, now we even have terms like ‘hijabista’ – a combination of ‘hijab’ and ‘fashionista’ geddit? And ‘hijabster‘, a hipster who wears a hijab).

NAH, BACA:
Protesters burned a cutout of Tunku & carried a coffin to his house. What upset them?

But what sparked the evolution of the hijab in Malaysia?

“I do know the whole high profile, celebrities wearing shawls helped spark the trend. One person who comes to mind is Neelofa, when she started her shawl brand, huge numbers of people started following the trend. Vivy Yusof is also highly regarded.” – Hafeez enlightened us

Some of you have probably heard of Vivy Yusof, Co-founder of FashionValet who launched dUCk luxury hijabs, that is seen as Malaysia’s version of Hermès’ iconic scarves. When she launched the rose pink number adorned with Swarovski crystals, the RM800 hijab sold out in FIVE MINUTES!

(From left) Vivy Yusof’s Swarovski dUCk hijab. The hand-painted batik hijab (centre) and lace ones are from Heart & Shawl

The hijab’s evolution over the years is nothing short of impressive. Modesty does not have to go out the window the minute style comes in, creative designers and everyday Malaysian women have shown.

3. From baju kurung… to abaya and kaftan THEN: Baju kurung, NOW: Abaya (this one is from Dolce & Gabbana. Images from discoveringmalaysiathroughminecraft.blogspot.my and ELLE

The 50s was a time when the baju kurung became popular for daily wear, as opposed to only wearing it for special functions. Eventually, the 60s saw the figure-hugging kebaya take its place in women’s hearts (and cupboards). They were typically custom-made and we of course remember Malay film stars like Saloma wearing them. So it’s mainly been the baju kurung and kebaya making their rounds until the new millennium.

Today, women are spoilt for choice when it comes to modest but stylish dressing. Abayas (robe-like dresses), kaftans, maxi dresses and skirts, long sleeved chiffon tops, sweaters, cardigans and blazers, jeans, etc. Fashion Designer Melinda Looi told CILISOS in an email that baju kurung and baju kebaya are still around of course, though designers are more experimental, playing with modern cuts on the sleeves, bodice and also the skirt. Frills, bell sleeves, feathers, asymmetrical cuts, chiffon and lace – from colour, to material, to design to embellishments, Malay fashion has evolved a lot over time, though it hasn’t totally lost its main frame. Consumers want to be trendy and yet still being able to call their attire baju kurung or even Baju Raya, so this encourages designers to think forward for them, Melinda added.

4. From tailor-made… to online shopping

Even the way we shop for baju has changed so much in the past decade! Those days, people would buy kain from Kamdar, look for a tailor and get it custom made, or they could buy ready-made pieces at department stores. According to tailors, customers would send in their orders as early as FOUR MONTHS before Hari Raya!

And while some people still love and order tailor-made clothes today (coz one-of-a-kind 😉 ), we have plenty more choices from international brands that are tapping into the huge modest fashion market – Uniqlo’s Hana Tajima line, Zara and Mango’s Ramadan collection, DKNY, Nike and lots more.

Plus, Malaysians can buy designer wear for less on Zalora because designers do collaborations with them, whereas if you were to buy it elsewhere, you’d probably have to pay a small fortune. Performance marketing technology company Criteo discovered that Malaysians are most active shopping three weeks into Ramadan, seeing average of 67% increase in online retail sales. And guess what people buy the most? Fashion laa!! 😀 So it wouldn’t hurt to use some of Flipit’s discount codes, so that it will be less painful on your wallets, hehe. Click to find more discount codes and offers on Flipit

5. From fashion magazines… to Instagrammers

Another thing that has evolved in Malay fashion is HOW people were inspired. Last time we had celebs to look up and copy, like Saloma and her kebayas.

We found fashion magazines like Fashion Magazine (lol very direct), which is considered the “first Malay fashion weekly magazine” of Malaya, lasting for 15 years, according to this report. Although it depicted Malay women in Western dresses on their covers, the kebaya was the outfit Malay women identified with the most. Even in those days they discussed issues about forsaking roots and culture coz people were following Western fashion a lot in the 50s and 60s. Andre Amir’s Instagram. His fans love his sense of fashion. Just check out the comments

“We have social media, everything is so accessible. We can Google it, we can Instagram it, we can see fashion of the entire world. It contributes a big part to the evolution of fashion in Malaysia, inspires people to create new things.” – Ardi told us

It’s interesting to see how Malay fashion will evolve next

It’s nice to see how trends are shaking up the Malay fashion industry in our country. At the same time, Malay dress hasn’t lost its identity entirely, because they are still baju Melayu and baju kurung, just updated!