Just recently, Science, Technology, and Innovation Minister Khairy Jamaluddin – or as our editor fondly calls him, Daddy KJ – took a spill because he tripped over a pothole while cycling, sustaining injuries that he landed in the hospital.

The whole incident gave rise to what was supposed to be an old discussion in the country: the absolutely crazy amounts of potholes in Malaysia. In fact…

Selangor itself has over 50,000 potholes!

In 2017, the Malaysian government partnered up with Waze to allow Malaysians to report potholes, specifically around Selangor and KL. And between 2019 and 2020, Selangor Chief Minister Amirudin Shari said that there have been 52,295 potholes reported on Waze in Selangor ALONE.

Most of us, especially drivers, would think of potholes are annoying and costly, because you have to fix your tires or sometimes even engines when you find your vehicle sinking down the hole of doom. However, we found that there have also been times where people have died from potholes.

But in the tens. In fact, almost 100 people died from potholes in 2011. In a study done by UM, it’s found that approximately 11.25% of road traffic deaths are due to road defects, and out of that percentage, 11.2% of these deaths can be attributed to…potholes. And this doesn’t even include people who have sustained injuries from potholes!

Sure, you may think that this number’s small, compared to other major causes of road traffic deaths. But still, there are people who have suffered greatly from falling into potholes, with one even having to get his left leg amputated.

“By right, they should take responsibility and pay proper attention (to the problems of road users), but, very often, victims like us are left to fend for ourselves.” – Pothole victim Muhammad Azizi Abdul Manab, as quoted from FMT

So given that potholes can be so dangerous, why isn’t the government speeding up their repairing process? In fact, some have gotten so tired of waiting for the government to repair the potholes that they’re doing it themselves! As you probably guessed…

The Malaysian govt can’t afford to repair all the potholes

So before we get into the costs of building and maintaining roads, let’s look at the money allocations of the governmental department responsible, which is the Public Works Department (PWD), or Jabatan Kerja Raya (JKR) in BM, that’s under the purview of Works Ministry.

See, in Budget 2021, the Works Ministry was allocated RM7.6billion, but apparently, the PWD doesn’t get to enjoy a lot of it. And out of RM7.6billion, only RM620million would be used for road construction and maintenance.

Alright, so that sounds like a lot, right? Well, not when you look at how expensive road maintenance, including patching potholes and repairing utilities, can be.

According to Brotherhood, a Malaysian biker gang that’s been fixing potholes themselves since 2007, it can cost anywhere between RM70 and RM3,500, depending on the severity. However, an opinion article on The Star stated that a single pothole can cost up to RM250.

For the sake of making it easier to do the math, we’re gonna use the RM250 per pothole as reference. So, if patching up a pothole is really only RM250, and Selangor has approximately 50,000 potholes, then PWD would have to spend RM12.5million to patch up all the potholes in Selangor.

However, bear in mind that just like snowflakes, no potholes are the same. Some may be deeper and bigger, some may be shallower and smaller, and there’s also the matter of workmanship and machines; these factors would make the costs of fixing potholes different and not fixed at RM250. Plus, Selangor isn’t the only place in Malaysia that has potholes. We’d imagine that the cost would be much higher if we include other states.

In addition, the RM620million allocated for road maintenance in Budget 2021 isn’t just meant for potholes. The cash is also used for road constructions and other maintenance projects like utilities and plants.

“Certain quarters believe that PWD has a huge budget, but the bulk of the budget is allocated to other projects and maintenance works. PWD cannot simply take money from other projects, as that goes against the rules.” – Senior PWD official, as quoted from NST

Cost aside, even if we could allocate enough money to fix all the potholes, it’ll likely not be a permanent solution because, well, they’ll just show up again. And that’s because…

Rain and sun are really bad for our roads 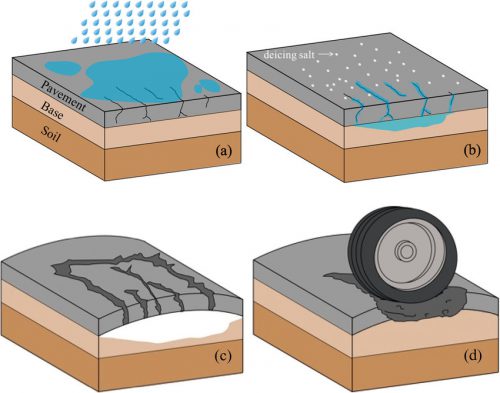 Potholes usually appear when there’s too much water seeping under the surface of the road, thereby weakening the soil underneath and eroding the support structure. From there, with a weakened support structure, the roads then fail to uphold the weight of vehicles, causing cracks. These cracks will eventually come together like a big family and the road material will dislodge entirely, creating a pothole.

“Water is the main enemy of road engineering. Our roads suffer greatly from the wet weather. The effects vary from sunken roads to potholes, to even other types of damages.” – Former Public Works Department Director-General Roslan Taha, as quoted from Malaymail Malaysia is a member of the World Road Association, which is an international forum that specifies the clear standards for road designs and safety aspects. And based on the forum’s standards, we’ve been making our asphalt by mixing bitumen, small rocks, and filler together.

This mixture’s supposed to be waterproof, but the thing is bitumen’s a material that softens with heat and turns hard when cold. And you know, Malaysia’s a damn panas country, so eventually with the wear and tear of the weather and heavy traffic, the asphalt will weaken, forming cracks and eventually potholes. Given that we’re almost constantly merciless under the sun, it’ll come to no surprise that there are so many potholes on our roads.

Still, despite all these being said, it turns out that…

Malaysia has one of the best roads in Asia (!!!) 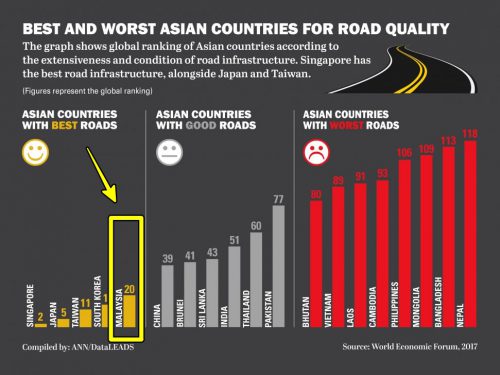 Image from The Daily Star

Based on a survey done by World Economic Forum in 2018, we’re actually one of the few Asian countries whose road quality made it to the top 20. Granted, our ranking dropped to 21 in 2019, but on a scale of 114 countries, being in the top 20% is still considered an A grade…right?

“Regardless of whether it is a federal, state or council road, each complaint will be channelled to the relevant party for immediate action.” – PWD Director-General Mohamad Zulkefly Sulaiman, as quoted from The Star

While having so many channels is great (unless you have trouble making decisions), perhaps the more important question is whether or not these complaints will be channeled to the right ears. If not, maybe we’ll have resort to inviting KJ to cycle around other places with potholes.