TW: Pics below may be disturbing to some.

When it comes to maids working in Malaysia, you may be familiar with these women… 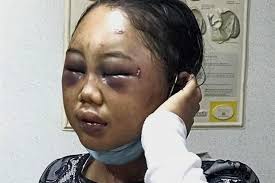 Suyanti, an Indonesian maid, was slapped and punched every day on top of being called an animal by her employer. Img from The Star, 2016. Meriance Kabu, whose teeth were pulled out, was rescued after throwing out a note asking for help. Img from Tempo. Adelina seen sleeping on the porch of her employer’s house. Img by Steven Sim’s office, taken from the Malay Mail Online.

…and many other maids who may have suffered either abuse from their employers or exploitation from the agency that recruited them in the first place. We’ve written about this before and you can read more here, here and here.

Just like some of us who may have experienced growing up with domestic workers, three Malaysian women – Zenna Law, Elaine Sim and Sophia Jamal – who were raised by domestic workers, realised the issue faced by foreign domestic workers. And they’ve decided to do something about it by forming a recruitment agency.

And we were lucky enough to be invited to the launch of a new recruitment agency founded by these women called Pinkcollar.

“The firm’s name is derived from the term given to jobs usually held by women — such as nannies and helpers.” – excerpt from Malay Mail. Apparently, this agency is unlike any other existing out there. This is because Pinkcollar claims that it practices ethical recruitment. But before we go further into that, we actually got in touch with the Pinkcollar team to find out more about the agency and we found out that…

We’re not kidding, gais. This is legit. Some comments inquiring about training to be workers under Pinkcollar. Screenshot from Pinkcollar’s Facebook page.

As it turns out, domestic workers are getting more tech savvy these days. And just like Malaysians, who would scroll thru websites like Jobstreet or even apply for jobs via email, domestic workers can do the same with Pinkcollar. In fact, they get an easier choice by commenting on its Facebook page or on its website (we like to make things easier for you so just click here) to apply for the job.

“Workers find us on social media and begin their application process by filling out our application form. We interview each candidate individually to understand their experiences, skills, personality fit and job preferences. Thereafter, we match workers to employers, using a thoughtful and unique matching approach to ensure that every worker we recommend to employers have the skills, experiences, preferences and personality type that fits the employer’s household needs and management style.” – Pinkcollar team told CILISOS.

Yeap, workers would be asked pretty specific questions in the application form like what kinda dishes they can cook (Malay, Chinese or Indian food), if they can take care of children and elderly, or if they have prior experience with handling pets! The Pinkcollar team added that it vets workers during the first interview. She told us that about 30% of worker-candidates who applied would be dropped to maintain a high-quality of candidates who are physically, mentally and emotionally fit to work in Malaysia.

Well, there were cases where employers were cheated by recruitment agencies by getting poor quality of domestic workers or domestic workers who run away  (yes, apparently agencies are making profit outta this) after paying some huge amount of money to agencies. And Pinkcollar wants to put a stop to that. Heck, they go a step further by vetting… employers too!

Just like workers, employers who want to hire domestic workers may have to fill in a registration form. The form has specific questions on things like the number of children and their ages, if they have pets and what they’re looking for in a worker.

After that, Pinkcollar would contact employers to have a chitchat with them to find out if they are willing to adhere to the employment contract terms and show that they’re capable of being responsible employers. Only after they get to match an employer with a domestic worker that they would send workers for training at Fair Training Centre (we’ll explain about this more later) in the Philippines. Just to remind you, domestic workers aren’t really protected under the Employment Act 1955. And, under this training, workers are taught on their rights as a worker in Malaysia. But that’s not the only thing that makes Pinkcollar deemed ethical. It also offers:

NAH, BACA:
4 things DAP can do to improve its image among the Malays

Once the workers are trained and their visas are processed, which is covered by Pinkcollar btw, then they’ll be brought to Malaysia to work with employers. And all this may take up to 3 months and may cost you around RM10,000 to RM12,000.

Upon their arrival here, they’d be given a welcome pack which includes a journal that we saw at the launch: Apparently, this journal, which was designed by Zenna’s friend, Nina Verduin who is based in the Netherlands, is a tool to help workers track their expenses and allow Pinkcollar to check on their workers every now and then.

“The income and salary trackers serves as a financial management and recording tool (crucial for accountability in case any salary disputes arise), while the rest of the journal, including the poems, welcome message, mood trackers and journal pages serve as an emotional resilience tool to help workers cope with homesickness or daily difficulties they may experience.” – Pinkcollar team.

However, Zenna actually had a different plan when she first started the agency because…

Zenna found out that the real problem in the process of recruiting domestic workers is… exploitative middlemen. One common example of exploitation done by recruitment agencies, according to an academician Linda Lumayag, would be educating employers to hold workers’ passports.

“The oft-repeated story is that the agency told the employer to keep the passport of the worker even during their days off. Or the worker is asked to sign a paper waiving her right to hold the passport – for “safekeeping”.” – Linda wrote to Aliran.

But that’s just one out of the many exploitation domestic workers might have to face each time they’re hired in our country. Other things they might be facing are like misleading job descriptions by agencies, wage cuts to repay their recruiter for finding them a job and even deductions from their monthly wages.

And because of this, Zenna thought of exploring the possibility of opening up an ethical recruitment agency in Malaysia. She started off by getting involved in ethical migrant recruitment for quite some time before being introduced to Scott Stiles, who’s with the Fair Employment Foundation – a foundation aimed at eliminating forced labour from domestic worker recruitment – and its group of social businesses. Scott of the Fair Employment Foundation. Img from The Sun Hong Kong

Scott then connected Zenna to Elaine (Pinkcollar’s co-founder), his former intern at the Fair Employment Agency in Hong Kong. This was pretty much how Pinkcollar went from a platform that only connects employers and workers to an ethical recruitment agency.

“Scott became strongly invested into our efforts and agreed to mentor the Pinkcollar team to help us succeed. Thereon, Pinkcollar worked hand-in-hand with the Fair group of social businesses (including the Fair Training Center) to build an ethical recruitment pipeline for Filipino domestic workers migrating to Malaysia.” – Pinkcollar team.

Will this be the future of recruiting domestic workers in Malaysia?

The debate on ethical hiring has been ongoing for a while. And actually, the govt has been implementing some initiatives to help curb the issues with recruiting foreign domestic workers.

One of it is by removing the middlemen entirely. For instance, the Immigration Department has introduced a website called Sistem Maid Online which allows employers to directly hire domestic workers. However, according to Agensi Pekerjaan Afif Sdn Bhd, MD Zaihan Md Lani, the system might only benefit employers who are already hiring domestic workers.

“Employers seeking to hire maids without the help of an agency will have to bear the risks themselves when it comes to legal and safety issues.” – Zaihan in an excerpt from The Malaysian Reserve.

Although ethical recruitment is not something new in other countries like Hong Kong and Singapore, the launch of Pinkcollar might be a start of a new era of recruiting domestic workers in Malaysia. And although they’re only hiring Filipinos at the time being (yes, we get that Filipino domestic workers can be slightly expensive than Indonesian workers), they have plans to hire Indonesian and even… LOCALS!

“We definitely have many plans for the future, including expanding our recruitment to Indonesia by next year, and working on a local employment program to also assist and empower Malaysian B40 communities with sustainable and long-term employment.” – Pinkcollar team told us.

Hopefully, with the new ethical recruitment movement in Malaysia, we’d see an end to all the abuse cases we see in the news.