CNY 2019 has come and passed, and (Chinese) new year means new you also laa. Some of us love the ol’ fortune teller predicting our year, especially when you consider how many TV appearances Joey Yap makes during this time of the year. But this time, the person making the prediction isn’t Joey Yap, or even a living human!

Like, whaaa? Are we all supposed to get rid of the fortune tellers, think tanks and economists since a deity can apparently do the same job anyway? But hold on k, we’ll explain more about the deity in question, Chor Soo Kong, and his temple in a bit. The first thing tho would of course to be to investigate whether his prediction correct or not in the first place la.

Can believe or not this deity?

One of the things CILISOS takes pride in is holding people accountable – yes, even deities – and so before we go on about Chor Soo Kong, let’s first look at his last two years of predictions ok? Let’s first look at last year laa. For 2018, Chor Soo Kong actually predicted that it would be a good year for Penang. Indeed, he wasn’t even the only deity to say so – another Penang temple did a similar thing with the God of Prosperity, who also predicted a good year for Penang. And incredibly, this seems to be true as it was actually reported last year that Penang’s economic development for 2018 was positive, and that the state’s GDP was higher than national figures.

Meanwhile, for 2017, Chor Soo Kong err, ‘mentioned’ that Penang would be set for an average year overall that would however see a very strong start to 2017. This time tho, the deity’s visions weren’t that accurate la, as while Chor Soo Kong predicted a strong start to the year that would fade out, in Oct 2017, Ong Kian Ming released a statement that Penang was at the time one of the best performing states in the country on almost every single economic indicator #showoff.

So while Chor Soo Kong may not have a 100% track record, people do still seem to love him anyway, with this year’s ‘prediction’ ceremony having as many as 30,000 devotees, so it means he must be doing something right. We’ll go into further detail over how the deity gives us his predictions, but perhaps the first question many of us would be asking is: who exactly is Chor Soo Kong?

Chor Soo Kong, a deity known for his healing powers and ability to make it rain

Qingshui, born in 1047, was a Buddhist monk who lived during the Song dynasty in China. He became a monk at an early age and took over the role of chief monk of his temple shortly after. There are a number of tales surrounding his healing powers as well as ability to make it rain thru prayer alone. In fact, Qingshui is apparently credited with saving the Chinese town of Anxi during a drought and in return, villagers constructed shrines to honour him.

Depictions of Qingshui are pretty easy to spot, as he’s usually in ceremonial Buddhist robes, shown with a black face and posed as tho he’s meditating. He has a black face as it’s a representation of his victory over others thru kindness. 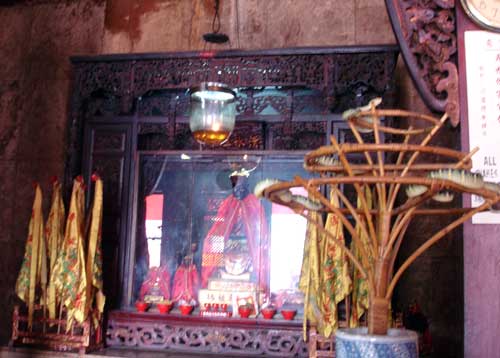 Anyway, sometime in 1850, another monk came to Penang from China with a statue of Qingshui, who was known to the locals here as Chor Soo Kong, meaning ‘ancestral master deity’. This statue would be placed in a then-small temple, and slowly would gain a following throughout Malaysia. In fact, one of his followers would even end up helping that small temple become the Snake Temple that it is today.

A mat salleh prayed to him and to repay Chor Soo Kong, built the Snake Temple David Brown was a Scottish planter who was in colonial Malaya around the time. Unfortunately for David, he fell ill in 1873, and Western medicine failed to heal him. He heard of Chor Soo Kong’s healing powers, and prayed to the deity.

Incredibly, he would allegedly be cured from his illnesses after praying to Chor Soo Kong. As such, David decided to repay the deity by donating his land to the small temple on which the current Temple of the Azure Cloud – better known by its common name Snake Temple – would be built on. 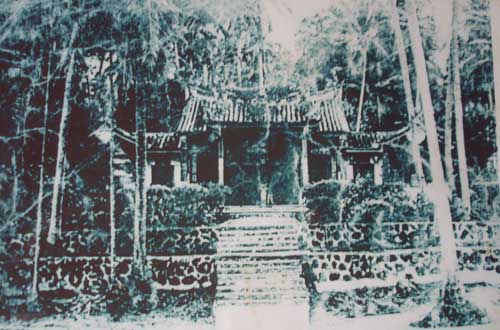 The Snake Temple before it had any major renovation work done. Image from pulau-pangkor.com

The story goes that when the temple was built, for some reason snakes moved into the building. However, they were not there to harm the monks, and in fact according to some, the snakes came by themselves as during Qingshui’s lifetime, he used to care and shelter snakes in the jungle. Other versions of the story is that these snakes used to reside in the jungles surrounding the temple, but as Penang developed, they moved into the temple and kinda became the building’s ‘guardian spirits’.

These snakes are also apparently not doped nor are they defanged, and remain pretty venomous. And yet, no one has been bitten, as it seems as tho the smoke from the burning incense has made them harmless, with some even saying that the snakes are pretty much paralysed.

The reptiles on show at the Snake Temple. Image from Malaysia Site

So now that you know more about the Snake Temple and Chor Soo Kong, it’s perhaps time to answer the question: Why is Chor Soo Kong of all people, or deities rather, giving us economic outlooks?

It’s actually a recent tradition, with this year’s festival the 7th ever

So Chor Soo Kong predicting the economy is actually just part of a festival called Ban Ka Lan Snake Festival, which began fittingly enough in 2013, the year of the snake. The festival was mainly established to mark the birthday of Chor Soo Kong, which falls on day six of the first Chinese lunar month.

The celebration sees performances such as lion and dragon dances, drum performances and Chinese martial arts performances, which will be topped off with a flame watching ceremony, where followers of Chor Soo Kong will refer to the flames of the incense urn. There will be three bursts of flames at the urn, and one would then be able to judge the year’s economy based on how strong these flames are.

“Highlight of the celebrations will be the prediction of the year’s economy by the resident deity of the almost 200-year-old Snake Temple. Devotees of the Cheng Chooi Chor Soo Kong deity will be able to know the prediction during the annual flame-watching ceremony,” – Cheah Cheng Ean, organising committee chairman, as quoted by The Star

Err, we don’t think this is how the Snake Temple’s flame ceremony works…

And so how was the prediction? Well, as for this year… maybe don’t spend all of your savings la alright.

“The first flame that ignited at 11.53pm was neither weak nor strong, signifying an average start to the year. The second flame came alive at 11.57pm and was very big and strong, signifying good tidings. The last flame was a bit weak,” – Teoh Hock Guan, Cheng Hoe Seah Association chairman, as quoted by The Star This year’s flames at the Snake Temple’s flame-watching ceremony. Image from The Star

Now funnily enough, this year’s report on the flame-watching ceremony didn’t specify whether that prediction is for Penang, or the whole country (so if you want, believe the good and throw away the bad loh). Teoh also added that you shouuuuuld probably take the prediction with a pinch of salt as well la. However, judging from how the last two predictions went, you decide yourself laa yeah. Disclaimer: Cilisos is not responsible for any actions taken due to reading about Chor Soo Kong.

That being said, regardless of whether or not you believe in Chor Soo Kong’s predictions, it’s perhaps fair to say that it remains a significant piece of culture, not just for Penang but for Malaysia too. With an almost 200 year old temple host to a ceremony that held a crowd for 30,000, you could hardly say that our culture is in decline. But even then, the Penang state govt is taking no chances, and has continued to encourage these cultural activities.

“This temple is one of the few places where we can still witness a flame-watching ceremony. The state government encourages local communities to play a role in conducting cultural events, as it is one of the focal points for our tourism masterplan. This Snake Temple will also play a significant part in our cultural tourism,” – Yeoh Soon Hin, Penang State Tourism Development, Arts, Culture and Heritage, Committee chairman, as quoted by The Star