Scams are always a hot topic among Malaysians because new cases seem to pop up almost everyday. Either you have kena scammed before or maybe you heard about that time your grandma’s neighbour has been a victim. For many, it’s a traumatic experience – especially if you lose out on lots of your precious, hard-earned cash.

According to a survey done by Norwegian telecommunication company, Telenor Group, 46% Malaysian respondents said they have fallen victims to Internet scams. But with the presence of the Internet, there are also some Malaysians that have learnt to not only quickly detect scams, but find unique, hilarious ways to troll the scammers in the process.

We managed to compile a list of six smart Malaysians who kena balik the professionals in the most entertaining way possible. Get our your notebooks and pens, guys – it’s time to take some notes from these geniuses.

1. This scammer got burned by a Malaysian uncle

He got a message from an international number, pretending to be interested in buying a 2015 model Benz for RM288,800. When asked to provide his banking details for immediate purchase of the car without even looking at the car, Chee sensed something suspicious about the fella and trolled the scammer with some sneaky Cantonese swear phrases while giving the scammer his fake ‘bank details’.

Surprise, surprise, the scammer claimed there was a RM1500 activation fee required for the transfer, asking Chee to send his receipt as proof before he got his RM288k. Pay attention to the Nigerian phone number, starting with +234! This uncle’s bank account name and banks are… interesting. Note the Nigerian phone number, starting with +234! Img from says.com

For those who don’t speak Cantonese, “ham kah chan” is a Cantonese curse phrase that translates to “may your whole family die” while “ba sang hor” which literally means the Klang river. Looks like this scammer’s dreams of finding an easy victim went up in flames. Img from says.com

The uncle quickly responded with a picture of some hell notes and paper car burning as ‘delivery’ of the car. This uncle more chun than you think!

2. A Chinese grandma scolds this fake kidnapping scammer until he hangs up! Yet another phone scam. Img from worldofbuzz.com

This viral video circulated around the Internet of this badass elderly woman, which you can watch here. And no, she wasn’t falling for the fake kidnapping fraud.

[Disclaimer: The entire video is spoken in Cantonese. Sorry if you don’t understand!]

The scammer called her, informing her they had kidnapped her son and wanted RM200,000 ransom for his release, being extremely vague about the details of the victim or how they captured him. This grandma quickly scolded them for asking for such a large amount of money as she didn’t really have RM200k lying around.

“You say RM200k, you wanna scare me to death? We are poor people – Where am I going to find the money for you? I have never even seen such a huge amount of money in my life.”

The scammer on the phone quickly rebutted her, shouting that he wasn’t a beggar and asking her if simply saying that she doesn’t have the money would settle everything. So the elderly woman asked for long term repayment instead of giving him the money in a single lump sum.

However, the grandma outsmarted them by asking them the name of the person they’ve kidnapped. When he failed to answer and kept trying to dodge the question, she kept insisting.

“If you don’t even know the name of the person you have kidnapped, how am I supposed to pay the money?”

It was this moment when the guy realized he wasn’t going to make any money and starting cursing at the poor grandma, who in turn started giving him an earful for not even knowing the victim’s name. The scammer quickly hung up.

3. The loan scammer kena tangkap after this victim worked with the police 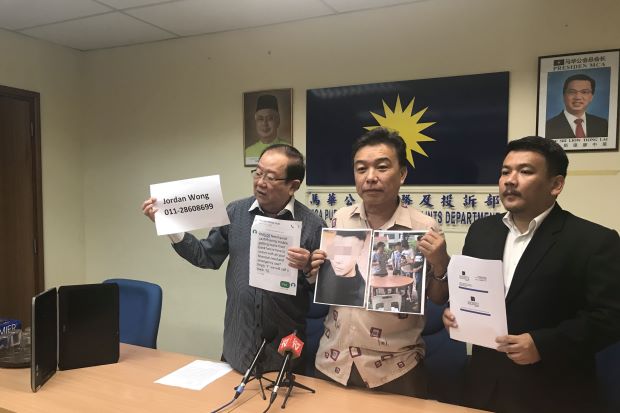 Chay, proudly showing off his hard work at getting another scammer off the streets with MCA’s Datuk Seri Michael Chong. Img from The Star.

The scammer told him he can get a RM30,000 loan if he paid for ‘under the table money’ to get his loan approved at his choice of 13 local banks. The ah long also called out Chay’s full IC name and knew his previous loan details, like how he was rejected for a loan in February last year.

He initially paid RM1,000 as a ‘bribe’ for the bank officer processing his loan but started questioning if this loan was real or not. When he was asked to pay a further RM2,450 in ‘legal fees’, the uncle decided enough is enough.

Chay visited the bank and found out there was no such loan approved by the bank, so Chay cepat-cepat went to the Cheras police station and reported the incident. He worked with the police to lure the scammer out to collect his money in person. The scammer was finally arrested by police officers who were there at their meeting.

4. This Mudah.my seller sold his scammer ‘tahi hidung’ for RM200k

When a random person messages you, volunteering to pay RM200k for your highest quality, premium boogers, would you take it? That’s what this guy, who’s a seller on Mudah.my, decided to do when a Nigerian number messaged him about buying his item listed on Mudah.my for a ‘good price’.

NAH, BACA:
Actually, what do the government do to ex-ISIS when they return to Malaysia?

The seller, who posted the screenshots on a Facebook page Siakap Keli, quickly told him he only sold tahi hidung for a living and that it was a ‘valuable material’ similar to tin ore. Pay attention to the Nigerian phone number yet again, starting with +234! RM200k for 2g of tahi hidung? What a steal! Img from Siakap Keli.

The buyer quickly asked him to pay an ‘activation fee’ of RM550 for the RM200,000 to be released to the seller, but this guy knew what he was doing. He berated the scammer, revealing that tahi hidung was actually boogers and obviously, the scammer never replied after that.

5. A love scammer thought he was getting RM3500 but he got a monkey receipt instead We’ve all heard of those love scams who trick lonely single women into parting with large sums of money, right? This lady trolled this love scammer on Facebook with a fake profile by the name of Johnson Chris, an alleged oil and gas engineer.

The ‘American’ then tried to trick her out of paying RM3500 for ‘luxury gifts’ before they got delivered to her home, via an agent. He used an ‘agent’ to send her his gifts and she needed to pay for the delivery. Img from Facebook.

The lady played along, cursing him out in Malay along the way.

The phone number is an American phone number, with an area code (831) belonging to California so at least the fact that he’s ‘American’ kinda checks out. But his use of grammar and spelling for an ‘American’ fella a bit fail la. Needless to say, the scammer didn’t respond much after the scam was exposed.

6. This Carousell scammer threatened this lady with arrest, the FBI and state police unless she paid RM477 Much scary threats. Img from Hype.

In this article by Hype, this scammer approached this Malaysian woman, Baiti Al-Jannati to buy a book she posted on Carousell.

The scammer claimed she was a Malaysian living in Belgium but had a sister living in Kedah. However, while she was transferring RM23 for the book at her local bank, there was a ‘bank glitch’ and she could only make a minimum transfer of RM500, so Baiti needed to return RM477 before she received the money. Really… what kind of European bank will have such glitches?

If Baiti didn’t pay her RM477 within the hour, the scammer threatened her that the bank will take legal action and she would be arrested by the FBI and state police. Please guys, the FBI only works in America.

Notice how the scammer was supposedly Malaysian but doesn’t even understand basic Bahasa Melayu? Baiti had had enough and simply responded with several hilarious memes. What a response! Img from Hype.

According to Hype, the number that was messaging Baiti was yet ANOTHER Nigerian phone number! Please be wary of any international numbers starting with +234, guys!

What about those that aren’t so smart?

The Malaysians listed above are one of the few great examples of people that quickly realized it’s a scam and managed to troll their scammers in a pretty epic way. But there are still other Malaysians that aren’t so quick to realize the scam and unfortunately, lost some money in the process.

1 in 5 Malaysians don’t see these scams as frauds before it’s too late and their money is gone, according to this study by the parent company of Digi Sdn. Bhd, Telenor Group. They found that 1 in 5 Malaysians had been victims of either Internet auction scams or online dating scams. In 2014, Malaysia ranked fifth in the Asia Pacific region for the large number of online scams as the total cyber fraud cases topped RM1.2 billion, according to US-based IT security developer, SOPHOS.

The top 3 most common scams are ‘work from home’ scams (30%), Internet auction scams (22%) and Facebook password hacking (20%) of the reported cases in Malaysia.

However, the scams we listed above aren’t the only ones. There are still more types of ways scammers try to tipu your money like investment scams, EPF scams, land purchase scams and many more. More information about the different kinds of scams you’ll find in Malaysia and how to avoid them, if you click here.

There’s always a few confirm signs of a scammer, usually they give you pretty vague details, have bad spelling or grammar when using the England, charge you various additional ‘activation/transfer fees’ for online banking transactions and usually have an urgency for you to cepat-cepat pay them.

The main problem is still awareness – because many Malaysians often believe those ‘too good to be true’ messages online or kena takut by those bank scams that say your account has been compromised. Pandai-pandai Google everything before you jump right in and hand these scammers your money. Do your research and find out if your message is true or not before you click anything.

How to avoid kena tipu?

We’ll avoid sounding like a broken radio, preaching about how to avoid being scammed so you can read more about it here and here. However, we’ll narrow down the top 5 ways you can help protect yourself or your family from being another victim.

If something sounds too good to be true, it probably is. And if you’re worried about any bank scams, you can always contact your bank and ask them. Most importantly, trust your instincts! Because sometimes when you feel like “eh can trust one or not?”, you’re probably right – always double check and triple check.

It’s better to be safe than sorry!