[This article was originally published in SOSCILI. To read the original version in Malay, click here!]

You might have heard that the Malaysian Anti-Corruption Commission (MACC) had recently appointed 12 people to be in their Consultation and Corruption Prevention Panel (CCPP). This CCPP will be overseeing MACC’s operational and functional implementation, so they’re kind of a big deal if you’re into anti-corruption stuff.

While we know that the 12 members of the CCPP are all professionals and experts from various fields, it might seem a bit weird for some to know that one of them is Datuk Yusof Haslam. 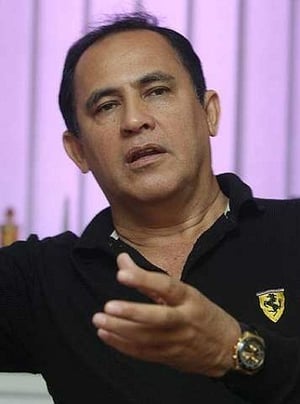 He played DSP Helmi in Gerak Khas. Img from Filmsomniac.

Local movie buffs would probably know him as a movie director or producer, but his recent appointment wasn’t that weird. Back when Najib Razak was Prime Minister, Yusof had already served as a CCPP member for a year between August 2016 to August 2017. Also, the CCPP was supposed to oversee anti-corruption practices for a wide range of industries, so having someone who knows the ins and outs of showbiz on the panel would probably help.

Since he turned 66 this year, we thought we’d take a look at some interesting parts of his entertainment career. For example…

Before becoming an extra in Laksamana Do Re Mi, Yusof was a bus conductor

Most of us probably had that one karangan class in school where the teacher asked you what you want to be when you grow up, as a prompt to your “Cita-cita saya” masterpiece. Having grown up on Hollywood and Bollywood movies and idolizing actor Shahsi Kapoor, Yusof Haslam’s cita-cita didn’t go very well with his class.

“When I said I wanted to be a movie star back in school, the whole class laughed at me. Even the teacher told me to look for other jobs like being a doctor or something, as being a movie star won’t guarantee a stable future.” – Yusof Haslam, translated from Sinar Harian. Today, nobody would bat an eye if you said you want to be an influencer.

Despite that experience, his mind was made up. However, one doesn’t just jump into showbiz. Some might try waitressing at a posh restaurant and hope a they catch the eye of a movie producer or something, but Yusof worked as a bus conductor for 10 months after he finished high school instead.

Since movie producers probably didn’t take buses, Yusof would secretly go to auditions until he finally landed a movie role… as an extra. But it was a pretty famous movie, though. If you’re going to watch P. Ramlee’s Laksamana Do Re Mi anytime soon, keep an eye out for the guards of Menteri Fasola: one of them might be Yusof Haslam. We dunno which one, actually. It’s pretty blurry. Img from Laksamana Do Re Mi.

Less than a year later, he landed his first leading role as ‘Idham’ in the movie ‘Permintaan Terakhir’, where he co-starred with actress Uji Rashid. Considering this was in the 1970s, that was no mean feat.

He quit his bus conductor job and entered the filming industry then, but as you’ve probably garnered from the quote above, he realized that being an actor in Malaysia wasn’t all Milo Dinosaurs and red carpets. The pay was small, and most actors at that time usually needed a day job to support themselves and their families.

Despite him knowing that…

He went on acting, and produced some well-received movies and shows

That must have been some superb Hollywood/Bollywood movie Yusof watched growing up, as he kept pushing forward the industry despite the low pay. After his breakout role, Yusof went on to star or appear in a slew of other movies, some of which we haven’t even heard of.

One of his more iconic roles was as ‘MM Jaafar Hassan’ from the 1981 movie Bukit Kepong. The film, directed by Jins Shamsuddin, became a huge hit at the time, grossing RM1.7 million and winning Best Film at the 3rd Malaysian Film Festival in 1982. Fun fact: it was also the most expensive film made in 1980s Malaysia, costing as much as RM1.2 million to make. Yusof would venture into directing films a few years after Bukit Kepong. His first work was the action-thriller-mystery Bayangan Maut in 1991, which starred Malaysia’s rock queen Ella. He went on to direct several other films after that, and in 1994 he finally hit gold by directing the record-breaking melodrama Sembilu, aka the movie where all these Malay aunties knew Awie from.

This movie was probably what brought fame to Yusof’s name, as it was said to be the most successful local film of the time, having grossed RM4.39 million at the time. That number broke a record set more than a decade before, as the only local movie which came close to making that much money then was Adik Manja from 1980. A production of Shaw Brothers, Adik Manja managed to collect RM3.5 million, which no local movie managed to surpass until Sembilu did 14 years later.

Sembilu be flexin on them Adik Manjas. Gif from Tenor.

Despite having worked in the industry for a while already, Sembilu was the movie that brought Yusof Haslam’s name into the attention of local moviegoers. It managed to put his later works, like Sembilu II (the sequel), Maria Mariana and Gerak Khas the Movie, into the spotlight.

You might have noticed that a lot of his movies have this melodramatic quality. With so many movies with similar energy being produced locally, one might wonder…

Despite the recent boom of gangster-themed movies in the last decade, Yusof Haslam’s most popular works were mainly melodramas, meaning that they don’t focus on action like exploding cars and giant robots. Rather, the plot of melodramas are sensational and appeal to the viewers’ emotions, through either bombastic or excessively sentimental dialogues. Or essentially any show on TV3. Img from TV3’s YouTube.

“During the Sembilu days, people assume that if you make a ‘love story’ you’ll succeed, but that’s no guarantee. It depends on the storytelling.” – Yusof Haslam, translated from Astro Awani.

Yusof had once admitted that his melodramatic films have some similarities with Bollywood films, and if you look closely, they focus a lot on themes like family and women. Every character in his films will at some point encounter social issues such as being victims of violence or harassment.

For example, in the movie Maria Mariana:

“Maria was a responsible and caring sister, whereas Mariana was a social butterly with no principles in life. However, Mariana’s life changed when she met a man. He started making Maria and her mother happy. Due to pressure from everyone around her, though, this change didn’t last, and she returned to what she was before.” – translated excerpt from ‘Kajian Terhadap Melodrama Yusof Haslam‘. 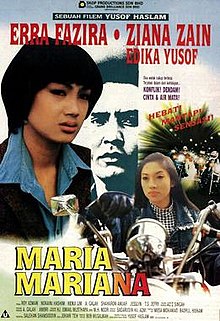 Unlike her sister, Maria has no need for a helmet. Img from Wikipedia.

Most of the characters in Yusof’s films also held characters that are melancholic yet loyal. Like in the movie Sembilu,

“Erra Fazira played Watie who was in constant sadness as she kept reminiscing about her relationship with Awie. Despite being loyal in her love, she had to marry Syamsul as she was heartbroken upon discovering that Awie was caught having relations with Ziana.” – translated excerpt from ‘Kajian Terhadap Melodrama Yusof Haslam‘.

These qualities in Yusof’s films enable the viewers at that time, particularly women, to empathize with the characters and be attracted to his work. It would seem that Yusof knew what his viewers want and acted accordingly, making him quite successful in his field.

Yusof still gets his share of criticism, whether as a director or as an association president Some of the new independent MACC members. Find Yusof! Img from Bernama.

During the time when he was actively directing, despite the success of his movies, Yusof had his share of criticism from critics and some quarters, particularly from his male viewers. And the criticism extended to his other jobs as well.

For example, when he was the deputy chairman for FINAS and the president of the Malaysian Film Producers Association (PFM), he came under heavy criticism during the 28th Malaysian Film Festival for separating the categories of films based on their language: Malay and non-Malay. He stood by his decision, however.

Perhaps most memorably, he was also criticized for allegedly using his influence to nominate movies made by his sons, Syamsul Yusof and Syafiq Yusof, to win awards. However, he had denied these allegations, and said that he made it a point to not hold big positions to avoid conflicts of interest.

Despite all this controversy, it can’t be denied that he had been in show business for a long time, and had made his mark on Malaysia’s entertainment industry during that. Hopefully, his experience can be put to good use as one of the CCPP’s panels.