Imagine you’re driving on a road then you get stuck in a jam. So you’re there either cursing your sad life or pondering the secrets of the universe, and suddenly you realise the car in front of you is the exact same car (and same colour) as yours! Then you’re all like. Please don’t actually do this while driving. Notice that the person who posted this said cloned car. But what in the world are cloned cars? They’re vehicles smuggled in from other countries which have had their documents, chassis and engine numbers forged. Often times they forge everything based on an already existing car of the same model and colour. So in a sense, like a form of car identity theft!  😯

This case actually isn’t the first time a car has been cloned in Malaysia. According to Jabatan  Pengangkutan Jalan (JPJ) Director-General, Datuk Seri Ismail Ahmad, said that there are about 2000-3000 of these kinda cars in Malaysia. In other words, there are 2000-3000 ‘clones’ out there (hence, cloned cars).

So now we ask you THE question, where do you think all these cloned cars are coming from?

The fact that we mention Singapore might have come as a shock to some of you because of Singapore’s squeaky clean image to us Malaysians. But the thing is, articles like this, this, this, and this (one of them is even an article from Singapore itself!), mention that to be the case. Why are these cars coming from Singapore? Well, paultan.org reports that this could possibly be because Singapore has a lot of scrap cars. But then the question is why would Malaysians buy Singaporean scrap cars right? It’s not like we’re so desperate that we’ll take junk that people don’t want right? Enter the Certificate of Entitlement. *jeng jeng jeng*

A COE is basically a document in Singapore that you need to bid for if you wanna own a car in Singapore. So if you want one, you gotta outbid other people. But here’s the bit about how it contributes to so many Singaporean cars in Malaysia:

“Singaporean cars come with a Certificate of Entitlement (COE) that’s valid for 10 years, after which the car must be scrapped or exported if the owner doesn’t bid for a new COE.” – JPJ Director-General Datuk Seri Ismail Ahmad, as quoted by paultan.org The bidding results are even published. Not cheap okayyy. Table from Channel News Asia.

So Singaporean cars are generally used for 10 years only. After that, you either apply for an extension for your COE (which is another expensive thing to do), you send your car become scrap car (even if still useable), or export. So they’re not actually old, sudah-mau-mati cars, but just cars that Singaporeans just aren’t allowed to use anymore.

But if they export, why end up still becoming illegal cars in Malaysia? Well, Datuk Seri Ismail adds that Malaysia does not allow cars to be imported in from Singapore.

So what we have is a lot of old, but useable cars in Singapore. And probably a lot of people in Malaysia who probably don’t mind some pretty decent, pre-loved items.

“Owning these vehicles is against the law and dangerous because it is not covered by insurance. Under the Road Transport Act, we will ask for owners of seized cars to relinquish their ownership and put the vehicles up for auction.” – JPJ Director-General Datuk Seri Ismail Ahmad, as quoted by paultan.org

But if you have so much to lose from buying a car like this, why would anyone do so?

The answer is money. Just in case the gif didn’t cut it.

But are these reports true? Well, we tried to find out. Through a Lowyat forum thread, we managed to find the Facebook page of one of these alleged dealers. (We don’t encourage crime in any way, but we’ve left one link for information purposes only.) We can’t say for sure that this page deals with cloned cars but this conversation screencap on Lowyat indicates that they do. 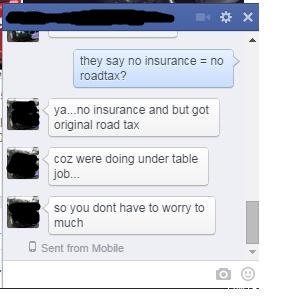 So what we did was compare one of their cars for sale with a legal 2nd-hand car for sale of the same model. Basically the price is too good to refuse la. And this doesn’t appeal just to Malaysians. According to Singapore’s The New Paper, Singaporeans themselves buy those cars if they are living in Malaysia.

“In Malaysia, (there’s) no COE. You can drive your cloned car until you die.” – Clone car dealer, as quoted by The New Paper

So even if it’s dangerous, it’s so gila cheap that people are willing to risk it. All these cloned car dealers do is hook you up with it. It’s a pretty simple business model, but that’s for the next point.

But how long has this cloning technology been around for?

Well, we have 2 sources that try to answer that question.

As far as news articles go, stories of syndicates that deal with cloned cars surfaced in 2013. For example, this article from The Straits Times Singapore mentions a car-smuggling bust in May 2013. Aside from that, we found a thread on Lowyat.net that actually discusses cloned cars in March 2013.

But it wasn’t until 2015 that these cases started to get a bit more attention in Malaysia and Singapore. And about 100 cars have already been seized since the start of this year. Click for article. Image from The Star.

In April 2015, JPJ arrested 10 people and seized 167 luxury vehicles. During the operation, they found that some of these cars had ori road tax while others had fake ones. Some of the buyers realised their road tax was fake only when they tried to renew it themselves, rather than renew through their dealers. This piece of information actually coincides with news that 10,000 road tax stickers had been stolen from the JPJ office in Negeri Sembilan last May. In regards to how these cars actually get from Singapore to Malaysia without getting caught, the Malaysian Anti Corruption Commission mentioned (in a joint statement with JPJ in April 2015) that they are looking not just JPJ officers but adjusters, insurance agents, and mechanics.

“It is a complex syndicate involving many parties.” – JPJ Director-General Datuk Seri Ismail Ahmad, as quoted by Free Malaysia Today

2. But a veteran used-car dealer tells us it’s been around longer than that

We had the opportunity to speak to a veteran used-car dealer named Fong from a sister company of CILISOS, Carsome.my, about the issue.

Fong, who’s been a used-car dealer since the 1980’s, confirmed with us stuff that we mentioned earlier like how these cars come from Singapore (while also adding that there are also Malaysian cars among the clones), and that people buy them because they are cheap. But what he disputes is that this only came about in 2013.

“Last time before things were computerised, these practices were a lot more rampant. I remember these things happening even when I entered the industry in the 1980’s” – Fong of Carsome.my Ironically, our national car was launched in the 1980’s as well. Image from bhauto.my

He adds that he has inspected cloned cars before, and when we asked him how he differentiates them apart, he tells us that the only way he can do so is look for the minor-minor differences in the design of the road tax. He says that there is hardly any other way to tell them apart because of how everything else is cloned.

So how to stop this from happening?

The government has been talking about implementing a few measures to deal with the issue in the long run.

Sadly, they don’t elaborate too much on how these measures are to be implemented. But in regards to the practice itself, Fong tells us that it’s probably impossible to get rid off, mainly because without thorough inspection. you really won’t be able to tell a car has been cloned unless they’re side by side. “The story of the man bumping into his cloned car the other day, that wan really jackpot.” – Fong of Carsome.my

And if the prices of the cars remain as cheap as they are, one can wonder if these measures would actually stop the sale of cloned cars. Especially when the prices of legal cars itself seems to be an issue in Malaysia.

Several articles (like this, and this) have attempted to do comparisons between the prices of cars overseas and the prices of cars here in Malaysia, and all of them say that Malaysians pay more for cars than other countries. Meanwhile, this organisation mentions that our own local cars are cheaper to buy overseas than in Malaysia! Heck this magazine even went as far as to rate Malaysia as the 2nd most expensive place to buy a car in the world! (With the top being Singapore, ironically.) And from this previous article of ours, we wonder why we’re paying so much for Proton cars in the first place.

So it’s possible that the reason we’re buying cheap, illegal cars is because we just can’t afford to buy the real ones. Thus, instead of merely looking to stamp out the sale of illegal cars, maybe the issue could be offset by dealing with the issue of expensive cars instead. Because while many of us don’t wanna break the law, we wouldn’t mind these being more affordable as well. Heeee. Image from motorbeam.com