“Guess how many sharks are killed every year.” When CILIBOS asked this around the Cilisos/Asklegal office, some threw around figures such as three thousand, hundreds of thousands and one million.

If you were asked this same question in a game show and answered 100 million, you would’ve hit jackpot. Yes, an estimate of 100 million sharks have been killed annually! If you wanna further shock yourself with devastation, you can take a look at this poster showing how many sharks are killed EVERY HOUR.

And while some of you may think that sharks asked for it because a few bad apples from the shark community attacked some humans and spoiled their maruah, there are still many of you who may wonder how humans could be so excruciatingly cruel. As one of our previous articles pointed out, the main culprit is finning, which fishermen find more lucrative than catching and selling whole shark bodies. Image from the New York Times.

The fins sell for as high as $1,100 per kg, so the poor fishermen would of course prefer to cut off the fin while dumping the “less valuable space-consuming body” back into the ocean to save space in the boat for more and more fins. Hence, the finned shark suffers a slow death as it sinks and bleeds, all thanks to the continued demand for shark fin soup in the Far East.

That’s why some peeps pushed for a particular fish species to replace shark fin soup as an atas delicacy to fulfill appetites for special stuff. In fact, it’s reportedly so good that there’s even a restaurant named after this fish species. But first, what’s this fish species?

Empurau, a.k.a. Tor tambroides, is a type of freshwater fish found throughout Southeast Asia, though unlikely found in Singapore because it doesn’t have large, fast-flowing rivers. The presence of such streamy and unclogged rivers is what these fishies need. 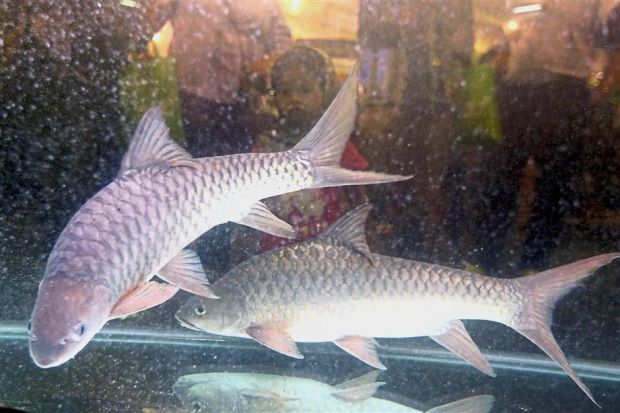 Empurau. Image from The Star.

Dubbed as the ‘King of the River‘, this fish species, particularly the one in Borneo, is well sought-after as a dish for its “tender yet rich texture and special aroma“… Here’s why. The secret lies in their unique diet of some small crustaceans and FRUITS we’re not familiar with like dabai, ensurai, ara, kepayang, engkabang and gaharu (oh wait, we’ve ady written about engkabang and gaharu).

Therefore, empurau farmers can actually make a lot from rearing and selling this rare unique creature for prices of RM 600–2,000 per kg, making it the MOST EXPENSIVE FISH in Malaysia! With that said, the empurau is considered a staple for fancy dinners. In fact, an Alternative to Shark Fin Soup Exhibition was held to move demand from shark fin to a reportedly more sustainable option, the empurau.

And for each pregnancy, the empurau lays multiple eggs while the shark only has 1 or 2 pups. So, to wait for the shark to reach its 33rd birthday to become a mother of 1 or 2 children, it’s nothing close to sustainable next to the empurau, which can start conceiving many more children at a much, much earlier age. However, the extent of its sustainability comes into question since this fish is listed by the IUCN Red List as “Data Deficient“, implying that there’s insufficient data to say if it’s okay to catch and eat them or not.

“Tor tambroides has been assessed as Data Deficient in view of its confusing taxonomy, and therefore its exact distribution range, population status/trends and threats.” – IUCN Red List justified.

But from what they’ve gathered so far despite the reported lack of scientific studies on this fish species, the population of this fish species has been decreasing due to over-fishing and loss of habitat initiated by human activities.

Chup. Over-fishing seems understandable, but loss of habitat? Well, remember when we said that the empurau needs clear flowy rivers to survive? Pollution violates that right of theirs by interrupting water flow. And because they eat fruits that fall from the trees by the riverbank, deforestation takes away their source of food. Hence, to make up for the dropping number of wild empurau fishies, a well-managed farming programme may be needed.

Sarawak has tried ways to breed empurau to replenish the number of fish and to reduce fishing from the wild since got cultured fish for consumption. But it could be counter-productive if genetic aspects of breeding are not considered or the breeding is not properly managed. 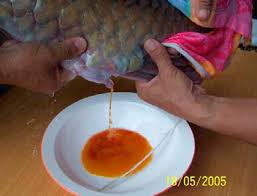 What happens is, when fish are moved from the natural environment to a cultured one, genes go through changes, like how animals evolve over time depending on evolutionary processes.

With that said, to avoid problems related to genetic changes, a guideline for creating a genetic management plan for this species was developed to facilitate its breeding without screwing up the genes. In addition, there have also been discussions about enhancing the ovulation of empurau in captivity and determining growth rates of empurau using different feeding systems.

Meanwhile, there are some people who breed this fish species on their own. One of them, Dr Elli Luhat, shared with Borneo Post about the intricacies of creating the ideal environment and diet for the fish when culturing them, which is nothing close to easy. To fulfill the empuraus’ needs, Elli said that constant water movement, shading, pH level, temperature and disaster control require close attention. It took him a while until he managed to figure out the right temperature (26-28 oC), oxygen content (7-9 mg/l) and pH level (6-7.5).

“The setbacks were due to my failing in coming up with the most favourable environment. But after all the trials and errors, I found the right simulation for the fish to survive and grow fast in a tank.” – Elli said.

In short, due to the severity of the shark finning problem, the empurau has been pushed as the alternative and has been gaining popularity in the fancy dining world due to its uniqueness and sustainability. But whether the empurau can save the sharks from extinction or not depends on the success of breeding and farming practices of these fish. If confirm successful, then it’s probably time to suggest the empurau at your next fancy family dinner instead of the shark fin soup.