A 34-year-old Malaysian Indian has been stripped of his citizenship and had his IC taken away by the National Registration Department (NRD) because they were suspicious of his identity. You see, he looks Indian, but his name is Tang Woon Seng, so that set off alarm bells.

Actually, he was adopted by a Chinese family who live in a village in Port Dickson, and they raised him alongside six adoptive siblings as a regular Chinese. But it seems like one thing went wrong way back in the past:

“My adoptive father registered me as his biological son and did not know it was wrong. I did not face any problems when getting my MyKad at the NRD at the age of 12.” – Tang Woon Seng told Harian Metro Tang Woon Seng showing a photo of him and adoptive dad Tang Kee Kwan. Image from Hazreen Mohamad on NST

He only ran into problems when he was 18 years old, as he applied to marry an Indonesian woman. The NRD suspected him of giving false information, took away his MyKad, and gave him a temporary identity card that states that he is not a citizen of Malaysia.

The other pressing issue is that his son was also registered at birth as non-citizen. 🙁

So actually who is entitled to have a Malaysian citizenship? New citizens taking their oath of allegiance at the NRD in Putrajaya. Image from seniorsaloud.com

We can find the laws surrounding citizenship in the HIGHEST LAW in Malaysia: the Federal Constitution. There are like 1001 requirements in there! (Ok, we made up that number, but seriously, there are a lot). Let’s take a look at some interesting facts.

Regarding children, every person who is born in Malaysia and who is not born a citizen of any other country will become citizens. Also, Section 1(a) requires at least one of the parents to either be a Malaysian citizen or permanent resident at the time of the person’s birth.

It is a common misconception that we only need a Birth Certificate to certify that we are Malaysians. In Article 14, 15A, 15(1), 15(2), 16 and 19 of the Constitution, you will notice that there are more documents required from the applicant. One often overlooked document is the Marriage Certificate of the parents, one of whom must be a Malaysian citizen (as mentioned), with supporting documents to prove so. Adults can also apply for citizenship. In Article 18, any married woman whose husband is a citizen is entitled to apply, if she has lived in Malaysia for 2 years or more, and is of good character. However, it is not stated that any married man whose wife is Malaysian can apply.

Since Woon Seng has been married to his Indonesian wife for 16 years, and if she has no criminal record, she would have been entitled to apply, if he still had his citizenship.

At the same time, the Constitution does state that the country can terminate a person’s citizenship if he or she becomes a citizen of another country, waged war against the country, been disloyal and so on.

In spite of what the Constitution says, the NRD seems to have a different way of doing things… 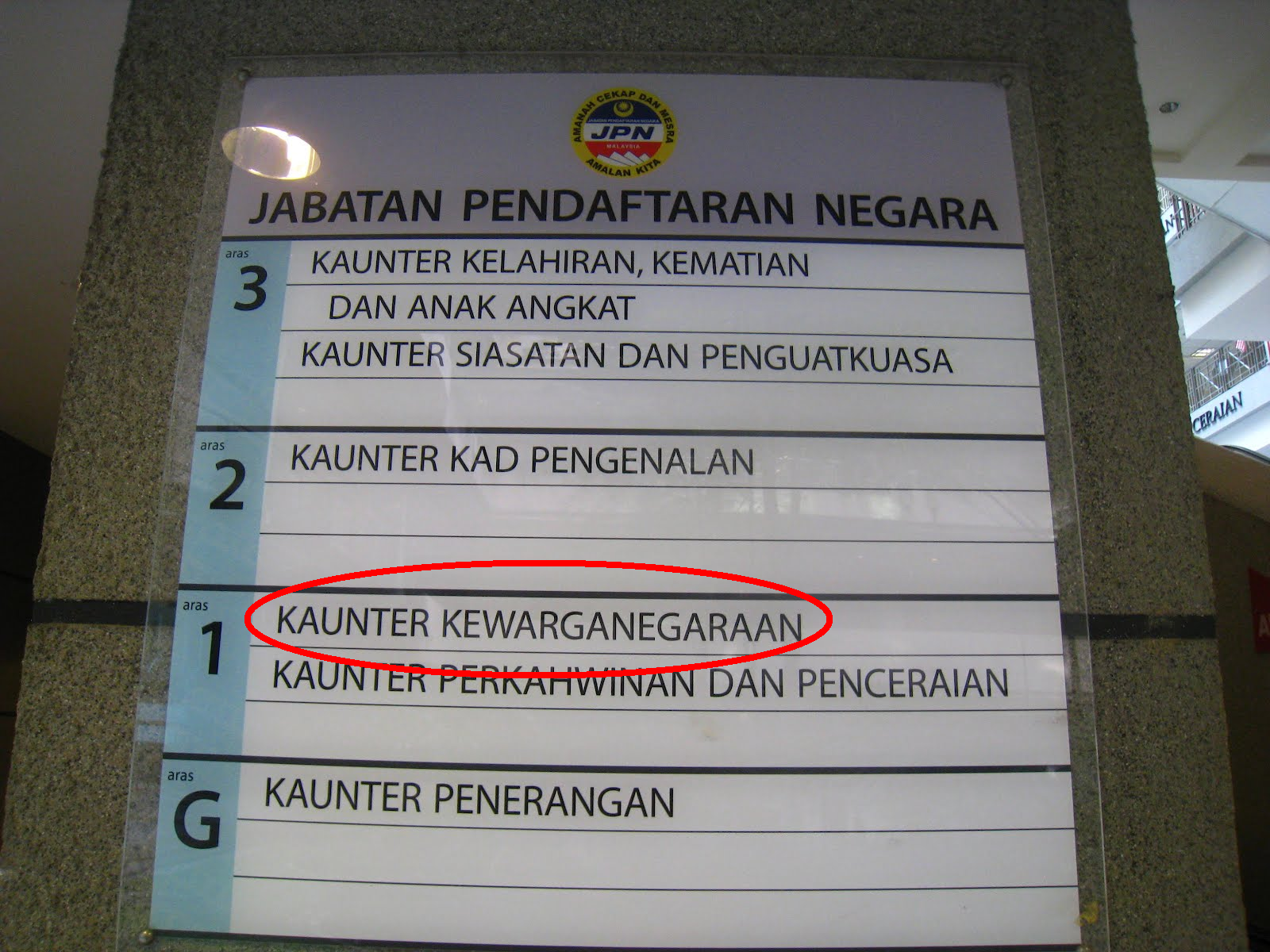 NRD at Putrajaya. Image from malaysiafrance.com

“To determine the status of the child, we will also look at the marriage status of the parents. In cases where the marriage is not legally registered and the mother is a non-citizen, the child would not qualify for citizenship, even if the father is a Malaysian.” – NRD Public Relations Officer Jainisah Mohd Noor, quoted in The Borneo Post

But lawyer Raymond Mah told Malay Mail that the NRD is wrongly applying the law, because the Constitution states that AT LEAST ONE of the parents has to be Malaysian, not necessarily the mom only. Plus the Constitution also states: “whose father is at the time of the birth, a citizen”. So why does NRD insist on looking at the mom’s nationality, we dunno. In the meantime, all you get is a red IC that says ‘stateless’. Image from The Sun Daily

Many lawyers argue that in the case of adoption, the authorities should grant citizenship to children born in Malaysia once they are adopted by Malaysian parents.

“I would urge the government to revisit this position as this is contrary to intent of the Adoption Act 1952, which by Section 9(1), provides that an adopted child is to be treated as though born to the adoptive parents in ‘lawful wedlock’, and Section 25A which provides that the birth certificate of the adopted child should not contain the word ‘adopted’, and by extension, the adopted child should have the same citizenship status as his adoptive parents.” – Goh Siu Lin, family lawyer, Malay Mail 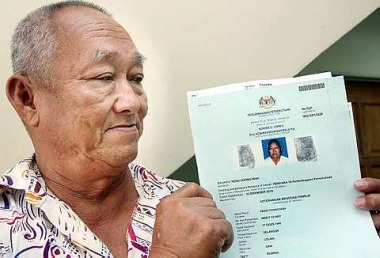 When your citizenship application is finally approved. Image from themalaysiantimes.com.my

But this the NRD’s view on citizenship of adopted children:

“Adoption only provides legal care rights of a child and does not carry along with it automatic citizenship rights…Ideally, it is the responsibility of the birth mother and father to obtain citizenship by dealing with their country’s representative to avoid their child from being stateless in Malaysia.” – NRD statement quoted in Al-Jazeera Some 12,000-300,000 Malaysian Indians are still stateless. Image from Low Chia Ming on Malaysiakini

It’s quite moving for us to learn that there are many others who are experiencing the same struggles as poor Woon Seng. A whitepaper reports that there’s an estimated 12,000-300,000 stateless Malaysian Indians, who worked in rubber plantations, and were denied citizenship because they lack any form of proper papers to identify them as being born in Malaysia, or to Malaysian parents who may have come from India generations ago.

Some of the other cases range from bizarre to just plain sad, such as the girl who looked ‘too fair’ to be her mother’s daughter (which is the exactly the same as Woon Seng’s case!!). The poor girl tried to commit suicide by drinking bleach after she was denied her MyKad.

And there are many who are senior citizens already having lived in Malaysia all these years, but still waiting, waiting, waiting for citizenship, like this group of old soldiers who defended the country, but the country thinks they are Indonesians. We’ve read of people waiting 40-50 years! One particularly sad story we came across was highlighted by Sin Chew Daily. 57-year-old Chen Shunhao who was born in Muar, Johor has been waiting for his citizenship for 45 years. Instead of a blue IC, he holds a red IC which is the permanent resident one. He has to pass the Bahasa Malaysia test first, but with only a Standard Four education, he failed the tests 3 times:

“It is not so much a problem communicating with my Malay friends in day-to-day dialogues, but the official was asking me current affairs in formal Bahasa Malaysia. I didn’t even understand his questions!” – Shunhao, mysinchew.com Grief-stricken having to keep waiting for his blue IC after 45 years. Image from mysinchew.com

Adoption cases in particular can be very much of a headache if the biological parents can’t be traced. But how if really cannot find them?! One such child was sold to a to child rights activist Hartini Zainudin, another was left at a pastor’s doorstep. Still others are abandoned at day care centres, orphanages or baby hatches. Obviously they wouldn’t have documentation with the parents names on them if they were abandoned, duh. But why should they be punished for it if their birth parents are MIA?

For those who have never had their citizenship questioned, we perhaps may not understand how hard life can be for people who go through it. Maybe some of us may not realise what privileges we have as Malaysian citizens…

… we can attend public schools, we have access to public healthcare, we can find employment, vote, register for marriage, etc.

People who are not citizens don’t really have access to these things.

Like the others, Woon Seng is at a loss as to how to restore his citizenship. In the meantime, NRD Director-General Datuk Mohd Yazid Ramli told the media that that his department is investigating his case further. Hopefully it will end well for him and his son.