I grew up in a competitive environment (yes, I can be a bit of a kiasu at times but aren’t we all?) with goals set in mind like graduating from Uni and getting my dream job as a writer.  I lived a pretty normal life and aside from the usual flu, colds and cirit-birit, I was a perfectly healthy young millennial 🙂 My friends and I in Penang for a Uni trip.

So, of course I was in shock when I was diagnosed with a chronic illness! Some more, the type that most people had never heard of before. I was diagnosed with lupus this year at the age of 22 when my life was just about to begin. It’s a disease that gradually ate up my right cheek, causing it to disappear. My right cheek started to bengkak in March 2017, but…

1. I had it for a year before I even realised what it was

We went from seeing the dentist to seeing the doctor only to have them diagnose me with various possible sicknesses. The doctors told me how it might be a wisdom tooth ache lah, something to do with my sweat glands or my intestine lah (I also have a cute, tiny lump near my tummy besides the swelling on my face), and, of all things, an insect’s bite… that lasted for a month?! Thank god I didn’t turn into an insect…

In between the diagnoses and the (unsuccessful) treatments, without me realising it a year had passed. And I still don’t know what’s wrong with me, even though…

2. I already had a friend who had the same condition

Azreen and I have been good friends for almost 4 years now. I didn’t know she had Systemic Lupus Erythematosus (SLE) until I found out she was absent from classes to go for her regular check-ups. She was diagnosed with SLE when she was still in secondary school.

Befriending Azreen made me aware of the word lupus and the term SLE. Although I’m so-called aware of it, I am still lacking of knowledge on what exactly lupus is until I was diagnosed with it. Azreen (left) and me.

This goes to show how hard it is to diagnose lupus. Since different people show different symptoms and these symptoms can be easily diagnosed as normal sickness at normal clinics, some people take longer than a year to know if they have it! Unlike what happened to me, Azreen’s symptoms started off with just normal acne, but they can be almost anything, such as:

Sounds pretty general, so if you suspect that you have lupus based on these symptoms, do seek a specialist to double confirm it. In my case, I was referred to a dermatologist after my parents insisted the doctor referred me to a specialist.

After checking my cheeks, my dermatologist suspected two diseases; morphea and lupus. I had to go through three processes to test which disease I had. A nurse took my blood sample for blood test.

Good news is, according to Azreen, you can get yourself diagnosed for only RM 5 at a public hospital!! Furthermore, she gets her medicine for FREE!

But, since I went to a private hospital, it cost me almost RM 2,000. That’s more than the minimum wage in Malaysia, weyh! And that does not include my medication bill.

Despite having to fork out some money for diagnosis, I’m actually relieved to finally know what caused the lumps on my face and tummy. Surprisingly, most people diagnosed with lupus are female. 90% of Malaysian SLE patients are females aged 15 to 44, normally who are fair-skinned. This means out of 10 SLE patients, there is only ONE male SLE patient like Azreen’s father.

NAH, BACA:
8 ways Malaysia made it to the World Cup (well, sort of)

Apparently, hormones has something to do with it, as well as other causes like…

However, most doctors believe that the cause to most lupus cases are… unknown as they find it hard to point out a specific cause to it. This includes my case too.

4. But it’s not just the skin that can be affected 🙁

Azreen emphasised how lupus affects different people differently because it has several types. But before going further into that, it is important to know how lupus generally attacks people. Lupus Erythematosus (LE) or lupus is an autoimmune system disease… which has something to do with our immune system.

Let’s think of our immune system as soldiers who defends our body from bad germs and bacteria by identifying which cells belongs to the body and which are foreign to it. Ready to fight them bad germs away.

Unlike normal people, the soldiers in a person with autoimmune system disease like me are super active and confused, so they attack ALL of the cells; the bad guys and good guys!!

These attacks cause inflammation to affected areas. LE pretty much attacks any part of your body system such as joints, skin and even your brain!

In my case, Lupus Panniculitis attacks my skin causing inflammation to the fatty tissue. When this happens, my skin will either swell or, worse, the whole fatty tissue will be burned causing my cheek to cave in! This is NOT a before and after photo. My face swelled (on the left) and now my right cheek is gone (right).

SLE patients like Azreen, on the other hand, will experience something called the Butterfly Rash (yes, because the rash looks like a butterfly) when they’re exposed to the sun. The thing about SLE is that it doesn’t only affect the skin but can also affect other body systems such as joints, kidney, and blood vessels. 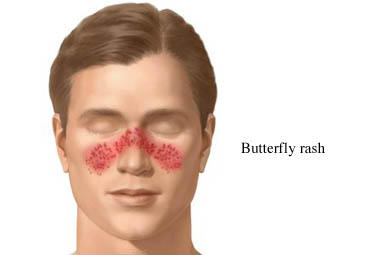 And since she was also diagnosed with another type of lupus called Discoid Lupus Erythematosus (DLE), most of the scars she had either took a long time to heal or they just won’t go away.

Speaking of scars that won’t go away, lupus is a disease that doesn’t bid us goodbye as…

5. There is no cure for lupus and we depend on medicine forever *sobs*

Sadly, doctors couldn’t find a cure for lupus at the moment, but there are treatments and medication.

Shockingly, there are common medication lupus patients take like prednisolone  and hydroxychloroquine. The only difference about it is the dose intake as it depend on patients. For example, I have to take 8 tablets of prednisolone on a daily basis while Azreen only have to take 3! The list of medicine I am taking with their respective prices. Unlike Azreen, they cost me almost RM 1, 000 per month (total price of medicine circled in red) 🙁

Follow-ups are important to detect the side effects of these medicine. Similar to the disease, the medicine’s side effects differs from one person to another. I had only experienced my stomach bloating and thinning of skin. Azreen told me how she gained weight just after starting her medication.

“I feel a burning sensation all the time when I eat steroids (prednisolone). My hair dries by itself in just 10 minutes when I wash it! Imagine how heaty my head is.” – Azreen

In some cases, some people will experience osteoporosis, color blindness, and nausea. This is probably why some people prefer to stop taking their medication.

Some commentators who no longer take their medication on Dr. Connie Jeon’s YouTube video “What Doctors Don’t Tell You About Lupus”

When famous singer Selena Gomez announced she had a kidney transplant, it shocked the whole world including myself. Actress and BFF, Francia Raisa, sacrificed her kidney for Selena after her condition worsened due to lupus. Apparently, Selena had been battling lupus since 2015 but only announced it in 2017 after the kidney transplant. We all need a Francia Raisa (not literally lah but it’s also nice if someone is willing to sacrifice for us) when facing this kind of disease. I have Azreen. Other than family and friends, it is important to reach out to people with similar conditions to be able to feel connected and share experiences.

But if you don’t know anyone with similar conditions, there is a support group called Persatuan SLE Malaysia (PSLEM) who helps provide information and counselling to lupus patients besides providing them with medical financial support. They are also the organiser of SLE’s awareness campaign called Walk-a-Payung. Although there is no cure for lupus, people with lupus live pretty normal, happy lives, and maybe even have the most followed Instagram account in the world (hint: Selena). We eat, drink, sleep, and do all activities normal people do although limited since we can’t go under the sun. Regardless of our condition, we do enjoy our lives. And as for me, I feel as confident as ever, rocking my no-cheek look and currently achieving my goal as a writer… at Cilisos! 😉