[This article is a translation from our bros at Soscili.my. For the original, click here.]

If you are a city person, you might like to go into the jungle to get in touch with mother nature once in a while, but there’s a group of people who literally (and we’re not using the word wrongly) make the jungle their office.

They are called park rangers, and it is their job to protect the jungle from….well, keep reading on to find out what. 😉 While we may think they are some kind of jungle superheroes, these man and women are usually just ordinary people, who love staying in the jungle more than your average city person. Not the kind of rangers you were expecting. Image from NME.com.

There are many ways these people end up becoming park rangers. For some, it started since childhood when they live near the jungle.

Asrul Abdullah, whose grandfather has been a park ranger for Taman Negara since the colonial times, often follows him into the jungle to collect rotan and medicinal herbs. For Hardy Mangkawasa, although his parents never went to school, he was educated by them on all kinds of things in the jungle and became a Murut ranger in the Maliau Basin in Sabah.

Some got attracted to the jungle like Noh Ismail, who went to school facing a mountain. Looking at Gunung Panti from school every day, he told himself that he would want to climb it one day. During a school holiday, he went hiking on the mountain and stayed there for 3 days and 2 nights!

“Since that day, I fell in love with jungle activity. We made camp by the ravine and could see our village. We could also see the lights from the village like it was a festival. So we just sat there and didn’t feel bored. We were happily chatting and played with our torch lights.” – Noh Ismail, Endau- Rompin Johor ranger, excerpt from WWFMy

Then there are some who got into it by (bad?) luck. Safri Muhiyuddin did not started out wanting to be a park ranger in Royal Belum, Perak. One day while he was leading a group into the jungle, they stumbled upon a live tiger in front of them. Since then, he has wanted to see wild animals outside of the zoo, over and over again. Although it may sound picturesque… fresh air, greenery, actually hearing a tree fall in the jungle so that you can tell people that it does make a sound… the life of a park ranger is hard.

Sometimes they are gone for so long, even their children don’t recognise them!

Being a ranger is not your every day office job. They don’t get to do the ‘Honey, I’m home’ thing, take off their coats and hang it… wait, who dafreak wears a coat in Malaysia?!?

They even have to work on weekends and even on festive holidays. A ranger could be in the wild for weeks or even a MONTH away from their families.

Asking a ranger’s kid when is daddy coming home. Image from babygaga.com.

When Asrul Abdullah, who is married with children, is in the jungle, there is no way to contact them. Sometimes, if he is lucky when there is line in the jungle, he would call and feel #blessed to hear his children’s voice. Can you imagine how hard that must be? D:

There was one time when he came home, his children didn’t even look at him, thinking he was a stranger. Only after staying a little while did his kids start playing with him. Even so, Asrul still feels happy because he was doing the job that he wanted to do.

Uhh, what do they do exactly in the jungle?

Rangers have a lot to do in the jungle, other than patrolling and monitoring the jungles. They could be gathering data about the behaviour and eating habits of Orang Utans one moment, or collaring elephants to track their movements in another, or even installing camera traps to capture photos and video of rhinos. Doing all these could take days, for them to track, install, and also waiting for the right time to act. 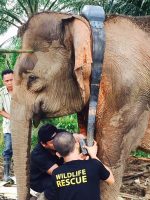 And there’s also other things that they wait for; poachers and loggers… which can be far more dangerous than wild animals.

As of yet, park rangers in Malaysia are not allowed to carry arms (except with a parang to murder weed), so it can be very dangerous when they are trying to arrest human poachers or loggers, especially when those guys are armed with guns.

NAH, BACA:
Malaysia has car highways. But now the govt wants to build a highway for animals!

Azizul Aslie and a few other rangers, they once confronted a group of five foreign poachers who had guns but did not have any license or permit. When the rangers tried to stop them, the poachers were uncooperative and even threatened to shoot them!

Trespassing in the jungle can get you caught…or killed. Image from My Newspaper.

In a case in Pulau Pinang, a ranger was nearly attacked by a group of Vietnamese loggers when a few undercover rangers raided the syndicate’s base of operations inside the reserved forest. Public roads have made it easy for these loggers to enter into reserved jungles and they come mainly to steal a special type of timber – gaharu, which could be worth up to RM20,000 a kilo.

Even if a ranger knows that someone is stealing gaharu, sometimes they can’t even stop them. Like when Kahirul Azmi, a ranger in Royal Belum, saw a group of Thais stealing gaharu. The best they could do was only snarl at them before running away, because they were armed.

What the heck right? Must be so frustrating for the rangers. Sometimes traveling in the jungle can be dangerous. Sabah ranger Kho Ju Ming was patrolling around Gunung Lotung which was shaped like a basin. While the mountain was not steep, but it also meant that he was exposed to any branches that could fall on him when it rains.

In an operation to try and find where loggers were coming in from, Ju Ming’s boat crashed onto a rock in the river, and one of his friends fell into the water. Although he managed to pull his friend back in, they had lost all their food in a flash flood. They were forced to call for outside help and waited for three days before a helicopter could send them food.

Then it gets scarier with the wild animals, when Terengganu National Park ranger Nor Diana came face to face with a tiger 50 meters away from her. Luckily when they ran away from it, the tiger did not give chase.

Others may not be so lucky, like the time ranger Azizul Aslie was trying to collect a camera trap in the jungle. After growing tired from walking and hiking for 5km, a female elephant appeared out of nowhere and started charging towards them. Azizul and the other rangers had to scramble to some nearby bushes, and the elephant’s leg got stuck in some roots.

“…I saw the female elephant walking towards me. I crawled to save myself with my backpack. Suddenly I found a large tree and hid there. Fortunately, the elephant’s leg got caught in some roots”- Azizul Aslie, excerpt from WWFMy

When you haven’t paid for your elephant toll yet. Image from Daily Mail.

And sometimes they encounter…weird things in the jungle…

Other than dangerous humans and wild animals, rangers can also encounter some weird things in the jungle. Once in three weeks, ranger Khairul Fazree would find trash inside a cave in his area of Gunung Ledang in Johor. He then later found that the trash was left behind by mystics who come to the cave to practice their black magic, or heal people with mysterious illness.

“At first it was scary to arrest these mystics. But you get used to it, you become less afraid because you want to protect the natural treasures of the area.”- Khairul Fazree, excerpt from WWFMy 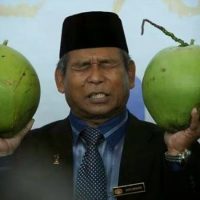 If you see this guy in the jungle, you might run too. Image from Infolaju.

For Ju Ming, he once was passing through a crevasse when it was drizzling, and he came across some people dressed in white and floating. A week later, he heard that there were 3 women who were possessed around the area.

“The strange thing was, one of the women was carrying a large wooden stump and the other two became nervous and disturbed when they heard happy music.”- Kho Ju Ming, excerpt from Sinar Harian.

In another incident in 2003, he was camping in the jungle with a researcher from Denmark. During the night, a strong wind blew and uprooted two trees that crashed near where they had set camp. Ju Ming then remembered a day before, one of his staff had a dream and warned him not to set up tents close to two trees.

Really, the things they have to do. Image from KPHMSM Perak.

Even though there are all kinds of dangers in the jungle from getting shot, getting attacked by wild animals, almost being crushed by trees or even encountering mystical things, their job is to protect the reserved forests in Malaysia from the people who want to exploit these natural resources.

Without them, a prehistoric caves could have been blown up for the sake of building a cement factory. Then there was a time when a native tribe in Sarawak wrote an open letter to Japanese PM Shinzo Abe to stop Japanese companies from destroying their forest and their ancestral land.

These forests have to be protected, not because they are a precious resources meant to be used properly, but because they have their its own right and function in our environment.