[This article was originally by our friends at SOSCILI. To read this article in BM, click here!]

Facial recognition tech. Flying cars. The . Everywhere we turn, technology is taking over, and the guys over at everyone’s favorite electricity provider Tenaga Nasional Berhad have hopped onto the bandwagon too.

In fact, it was our own Ciliboss who got some rather dystopian images sent in his PJ neighbourhood resident Whatsapp chat. Upon closer inspection, it turns out that these weren’t robotic chickens, but rather TNB drones. 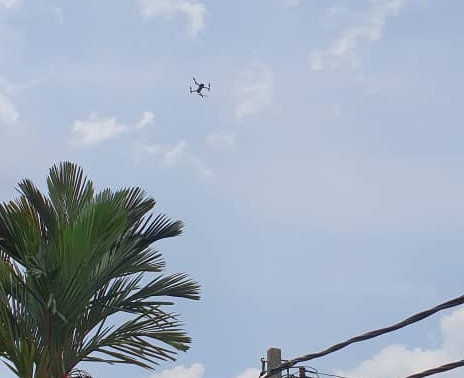 OMG. TNB has been using drones since 2016 to replace… helicopters!?

A few of us here in Cilisos have dads and uncles who used to work in TNB, so we’re kinda familiar with stories of them having to go up transmission towers and substations for routine maintenance as well as emergency repairs. As you can probably figure out, climbing up large metal buildings while there’s 240V of live electricity nearby isn’t exactly the safest thing in the world.

Which is why back in December 2016, TNB introduced a drone service to their army of technicians and electricians. 70 of them were brought in, each of them with a camera on board that allowed them to check out any possible issues with their transmission towers and lines. This surely beats TNB’s previous modus operandi of having to rent helicopters and have their guys fly over the transmission lines to check out for any potential problems. While drone usage for maintenance of low voltage towers are just in Petaling Jaya and Shah Alam for now, TNB’s drone tech for high voltage towers aren’t just limited to Klang Valley or major urban areas, but rather the whole country. For instance, we found one news report from 2017 on how TNB and Sabah Electricity Sdn Bhd (SESB) were working together on introducing drones in Sabah too, with their goal being to reduce the power cuts in Sabah.

“The use of the drone machine will facilitate the decision on next possible action, namely cutting down tree branches, apart form providing detailed data, especially for the hilly areas with steep slopes,” – SESB statement, from The Borneo Post

We even found TNB’s website dedicated to their drone services! Altho when we checked it out, there’s really not much said there la lol. Nevertheless, our friends at Soscili also managed to get in touch with Mohd Azan, the manager for TNB-IT’s UAS/Drone Services, who added that TNB has been aggressively expanding their drone usage since this year onwards.

“We will be expanding our usage of this (drone) technology to the whole of Malaysia, seeing as TNB’s assets and installations are everywhere,” – Mohd Azan, Manager of UAS/Drone Services, TNB-IT Sdn Bhd, as translated from Soscili’s interview Image of the Malaysian sky, 2029, colorised

Of course, with every new advancement in tech, there’s bound to be those claiming that it’s bad. We all remember just a decade ago how our parents used to complain about phones, but now they’re arguably on their devices playing Candy Crush more often than us lonely millennials.

But right, this time the new drone tech might actually be good for not just TNB the company, but the staff as well.

So here’s the thing about TNB’s work: it can be quite risky. It was just a few months ago in fact that a pair of TNB subcontractors were hurt while doing maintenance work. As they were doing repairs at a TNB substation, a high-voltage cable exploded, causing burns over their bodies. Meanwhile, late last year, there was another incident involving a TNB subcontractor who sadly passed away after a fuse box he was working on exploded.

NAH, BACA:
Why is TNB responsible for Selangor's water cut? We explain this in 3 hilarious carols!

Now we’re not saying that using drones would’ve prevented these incidents, but using drones to help out with maintenance work may be able to reduce the amount of risky work involved. And don’t just take it from us, even the Sabah Electricity Sdn Bhd thinks so.

“The (drone) initiative is believed to have a positive impact and subsequently will reduce the need for staff for physical monitoring which will take longer time and is risky,” – SESB, as quoted by The Borneo Post TNB workers getting high on the job. Image from Malay Mail

Drones also save TNB workers the trouble of investigating smaller but common problems, such as birds laying their nests on the power lines. According to Mohd Azan, these bird nests are often a problem as it attracts snakes, which in turn may cause a short circuit. While fried snake may sound like a treat, having to constantly check for nests and snakes isn’t. But with drones, they can detect them faster and easier, and quickly deploy their men to spots with nests to take them down.

But of course TNB has to think of the company too la kan. And as it turns out, since they began using drones to help out with the maintenance work, it has actually saved them quite a lot of money. In a June 2017 interview with Gov Insider, Fauzan Mohamad – head of Innovation at TNB – claimed that since the drone initiative started in December 2016, they’ve saved roughly RM1 million. And that’s just in half a year!

Fauzan added that the time taken to carry out servicing and maintenance has also been cut to half, and with the less guys needed to carry out inspections, they are now more efficient too. In fact, TNB’s drone initiative launch was so successful that they even won an award for the ‘Best Digital Transformation Project’.

Drones aren’t just used by Amazon to deliver your online impulse buys. In fact, next time you’re in Cyberjaya, take a look in the skies and you might just find one above you.

A company called Average Drone Sdn Bhd was recently in the news for apparently starting up a food delivery service in Cyberjaya using – you guess it – drones. It seems as tho these drones are able to deliver you anything from rice and noodles to burgers and fruits in just 12 minutes, all with a surcharge of just RM2.50. And if you feel like binging, these guys claim that their drones can carry up to 800g too, enough rice for you and your partner’s dinner. Average Drone placing a food pack into the drone. Image from Teknoratz

Other notable companies and groups looking at using drones include FELCRA, who recently teamed up with a company called MATA Aerotech to use drones for managing farms and fields. Sime Darby have also been looking at drone tech for supervising their plantations. Even the Kedah Royal Malaysian Customs Department have been calling for drones to be used in their efforts to fight smuggling activities in the region.

Of course, not everything has been positive about drones becoming more common in our world. Privacy concerns about drones have been raised before and are bound to be raised again in the future. And then there’s also the issue of safety, as there’s been a number of reports regarding drones causing accidents with planes. However, it appears as tho the authorities have been clamping down on unauthorised drone use, with the cops warning that areas such as KLCC, Putrajaya and airports are no-fly zones for drones.

Nevertheless, just like the car, internet and smartphone before this, drones have come and look set to stay for quite awhile more.