Just a few days ago, during an interview with Channel News Asia, Tun M said that he was THINKING ABOUT replacing the ringgit.

Whoah. What does that even mean!? We going to change currencies from Ringgit to dollar is it? Or use kerang ah? Well, in further detail, he said his administration is currently researching on either going cashless or changing currencies. What he means by changing currencies is that he would consider invalidating the old Ringgit note, and creating a new one. Then there would be a period where the public can exchange their old notes for the new ones. Ideally it would be the 50 and 100 ringgit notes as they account for 84.6% of the currency in circulation.

The term for this process is Demonetisation.

But why would anyone wanna get rid of… money!?

The main reason given by Tun M is to combat corruption and to keep track of the money being spent especially by the gomen.

Considering the recent events where cash amounting to RM116mil was seized from Najib, and RM53.7mil worth of cash was found at the Sabah Water Department’s Director and Deputy Director’s houses back in 2016, it is pretty apparent that there is a huuuuge corruption problem that needs our immediate attention.

But HOW does this actually work? 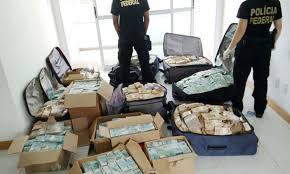 No, this is not how modern banks do million dollar transfers. Img from gstatic.com

Well in simple terms, there are two main types of money these days.

Amazingly, about 92% of the world’s total money is DIGITAL! The money is transferred into your bank account and you have the option to withdraw the money. Ironically, although no paper is involved in such exchanges, these transactions leave a paper trail. So if you do something that gets you in trouble, the police can go through your bank details to see what you have been up to. Bank statements can tell a lot about you than you think.

Think about it. Everytime you see bags of money, you automatically think something bad is going down right? That’s cos unlike digital money, cash is much harder to track. Er… unless of course MACC surprise visit you la. So in simple terms, when the ringgit is no longer a valid form of money, ALL the cash ppl keep in their apartments and sock drawers will be invalidated lo. If your Ringgit can’t be used to buy anything then it no longer has any value.

So how exactly would the gomen remove all the ringgit?

One way to get rid of the ringgit? Img from tenor.com

If they were to actually go through with this, there would be a lot of planning and procedures involved. And of course costs as well.

As you can see, the process can be quite tedious … but will this policy actually work? How to test if never do before!?

Luckily for us, India has already tried this whole process before. How’d it work for them?

On November 8th, 2016 (same day Trump got elected), India’s Prime Minister, Narendra Modi stole the limelight by suddenly announcing that he was going to discontinue the 500 and 1000 rupee notes. These notes made up of 86% percent of the total cash that was in circulation. He gave everybody until December 31st to exchange their cash at their nearest banks.

Why did they do it? Well, they had the same problem as us. Too much black money and corruption. Sommore their country so big which means lagi la the magnitude of corruption is bigger. All the preparations were done in secret and the announcement came as a surprise to the whole country. The result? Looong snaking queues started forming outside banks and some even died while queuing. It had become almost impossible to buy or sell anything because people kept trying to pay in the old notes and the small business owners wouldn’t accept it because if they did, they would have to go and queue up at the banks too and who want to jaga kedai in the meanwhile? People would start queuing hours before the banks opened. Img from hindustantimes.com

The news initially reported that it was the rich that were troubled more, having to burn their money la, they are suffering la, etc. just to console the public and make them feel like they are helping the nation. However, when the official annual report by Reserve Bank of India (RBI) got released almost a year later, the truth was out for everyone to see. They found that 99% of the demonetized money had been deposited back to the central bank.

Much technical. Very wowe. What does this mean?

This means that from the amount of money the RBI had printed, they had estimated that they would only get back about 75% of the money. But 99% of the money came back to them. Which means either India didn’t have any dirty money, or someone cleaned it.

As it turns out, people found a lorong tikus to this issue. Complex money laundering networks sprung up that would help rich people “manage” the money. Simply put, they would get poor people to deposit the money into banks for them by paying them a little bit of the money. This way all the undeclared money could now be legal.

Modi’s critics even accuse him of providing a safe passage to the rich people to convert their black money into white through this demonetization. Cartoons like this emerged throughout the country. Img from goodtimenation.com

Hmm…so means cannot la right? If all this lorong tikus can happen in India, what’s to say it won’t happen here? If we fail, all the corrupt people won’t have hidden money already and would legally be able to declare their money.

Another important point is that demonetization only targets cash. What about all the Hermès bags and diamond tiaras?

Hyah, if like that means don’t do la! Why risk it? We could just go the normal way by raiding people’s houses and collecting evidence to send them to jail.

Well, this process could take decades. Even for one case, MACC needs to do thorough investigation and collect evidence. Imagine busting hundreds of tax evaders and corrupt individuals.

Plus, there is a difference between India and Malaysia. While India had the right reasons for demonetization, their execution was less than ideal. There were reports of loopholes, empty ATM machines, and people having to take time off from work just to withdraw their own money. Which evidently made people unhappy and created unnecessary chaos. 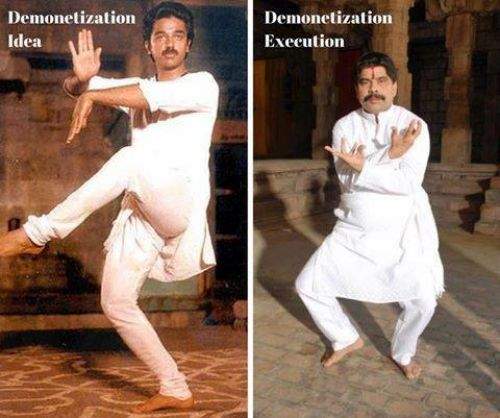 Economy, not so much, but India’s meme game surely improved. Img from newindianexpress.com

Malaysia might have an advantage as a smaller country with only 32.4 million people. As of 2016, total number of ATM machines in India per 100,000 adults was 21.24, whereas, the number of ATMs in Malaysia is 44.62 per 100,000 adults for the same period of time. This indicates that we have a tad bit better facilities than India and if we were to have demonetisation, it miiight be easier.

Whether or not we will do a better job, we’ll have to wait and see… but with the indisputable rise of corruption in Malaysia over the last few years, something needs to be done eventually…

“…the country loses billions of ringgit to corruption every year and drastic action must be taken against those involved in corruption.” – Subromaniam Tholasy, Malaysia’s Customs director-general, Malay Mail, June 30, 2017

And barring one recent exception, Tun M seems to be a man on a mission.