The attention has shifted back to the dreaded three letters of the alphabet…G-S-T!! bleuurghhhuhuhuk. Remember that GST was the focus of Pakatan Harapan’s campaign when they promised they would abolish it within 100 days of coming to power? This resonated with the rakyat who hated the tax and turun padang to show it a number of times.

Well, they really ALMOST did it! The Ministry of Finance announced that GST, currently set at 6%, will become 0% by 1 June. Wait… Zero rating is not the same as abolishing it. As of now, we don’t know when they’re gonna be abolishing it totally. But what’s the diff? We’ll get the EASY explanation out of the way first. Abolishing means a total cancellation of the whole system, sayonara, gone forever, belah kau! Now that that’s outta the way… zero-rating however means that GST is still in the system and the GST Act remains in place, plus all the regulations surrounding it. It will show up on your receipt, but you will pay 0%, which is as good as not paying tax at all. Sebagai contoh: But the important thing to note is that the Government could later decide to change the rate from 0% to 1%, go back to 6%, or any other percentage, maybe even more, because GST hasn’t been abolished.

Yeah yeah, but how will this affect Malaysians?

Let’s explore the effects of zero-rated GST on consumers, businesses and the economy. We spoke to Lee Heng Guie, an economist with the Socio-Economic Research Centre (SERC). Coming from a consumer’s perspective, it just means that you will no longer have to pay tax HOORAY. According to Heng Guie, consumers stand to gain the most and this might translate to more spending. He believes that people may take the advantage to buy cars. Other experts concurred saying prices will drop, though it’s too early to say for sure, coz there are other factors to consider (ie. currency exchange and administrative cost that will affect price movement).

“Theoretically, you walk into a restaurant, you won’t see the 6%. Effectively, you can see some savings. The low income group especially will benefit from it. But if the SST comes back then people won’t be saving that much la. People may take advantage of the time between GST being zero-rated and the return of SST.” – Heng Guie told Cilisos on the phone

Paultan.org reported that car prices should go down on 1 June but probably not a lot. An industry source told them it’s not gonna be exactly 6% cheaper coz carmakers have paid GST all along the production and distribution process, and the tax isn’t just charged to the customer in one lump sum. It would be the same then for a bunch of other goods.

Governments commonly use this method to lower the tax burden on low-income households, by zero-rating essential goods (ie. utility and basic food) such as these listed below: Coming from the business perspective, the system is indeed still in place and all the eligible companies will still have their GST registration number. Business owners will have to continue issuing a tax invoice (albeit it will be 0%) and GST filing to the Customs Department on a monthly basis. The filing is more for the Government’s record because as mentioned, the GST Act and its regulations are still in place, so they are still legally binding.

Another analogy is if LHDN one day decides to reduce Income Tax to 0%, legally, you would still have to file your annual tax returns, unless a Bill has been passed to completely abolish it.

Although companies will still have to file GST claims, they have nothing to claim 😆 coz 0% mah. So they will lose out on some refunds from Customs here and there, said Heng Guie.

SME Association of Malaysia president Datuk Michael Kang said the move would benefit small and medium enterprises in terms of reducing of compliance costs (in terms of hiring consultants and training staff to do the GST filing):

“The cost of doing businesses will go down. [Currently,] compliance costs for GST are high as you need to engage a lot of consultants and staff as mistakes in [the] GST filing can be costly in terms of penalties.” – Datuk Michael Kang, quoted in The Edge Markets

A study showed that SMEs in the Klang Valley spent between RM10,000 to RM225,000 on compliance cost, and it was usually higher for the construction industries. But on the bigger picture…

Heng Guie told us that it helps the economy by boosting consumer spending.

“Theoretically, in layman terms, it would reduce prices and people will save some money there. So they may be willing to spend more.” – Heng Guie told Cilisos

On the macroeconomic level, Maybank Investment Bank Research explained – 2018’s expected GST revenue is RM43.8 bil (it reached RM44 bil in 2017). The old tax on the other hand – the Sales & Services Tax (SST) – brought in RM17 bil in 2014. Zero-rating it is expected to kurangkan revenue by RM25.6 bil, based on a simple pro-rated calculation. In other words, GST brings in BIG BUCKS, whereas SST like small cili padi.

But the MOF assured that they’ve got buffer initiatives to counter the effects of losing money collected through GST. Besides bringing back SST, they will cut down on expenditure, make things more efficient and reduce wastage. One of the things they’ve done for instance is cutting down on 17,000 contract staff.

Additionally, higher oil prices for exports provides a buffer for the immediate future, said the ministry. It said that the oil prices have been higher than the US$52 (RM206) per barrel that was estimated for Budget 2018.

And then there’s ‘exempt’ GST…

Don’t panic, this one only requires a short explanation. In Malaysia there’s standard-rated (which is 6%), zero-rated (0%) and exempt GST. So the standard-rate will automatically become zero-rated come 1 June, but exempt supply will remain exempted from tax. In other words, no effect la, so we don’t have to go too deep into this.

Briefly, exempt means the company or business is not required to charge/collect any GST on this category of items. At the same time, are they NOT allowed to claim credit or refund from Customs (whereas for zero-rated items they can claim). Here’s the list of stuff under exempt category:

GST could have been a good thing, but was it introduced the wrong way at the wrong time? Love it or hate it, GST has proven to be a big boost for Malaysia’s economy in contributing about 18% to overall revenue. Just stating the facts… but where the money is spent is another story.

“If we look at the GST revenue stream on its own and compare to commodity revenue, clearly it is a lot more steady and stable. In that sense, it is easier for the government to plan, when you have a more stable income stream.” – Edward Lee, SEA Head of Research, Global Research of Standard Chartered told Bernama

Another reason why it was actually good for the average rakyat is because it’s transparent and reduces the number of indirect taxes incurred. Businesses could show the tax applied on the sales invoice itself, so that customers know exactly how much tax they are paying for their purchase. But of course to the average rakyat who are more concerned about bread and butter issues, it was perceived that everything naik harga kaw kaw (in truth inflation was the lowest rate since July 2016, especially for food and non-alcoholic beverages).

Perhaps, what the previous Government could have done is to introduce it slowly, by starting with 1% first, then gradually increasing from there, so as not to cause a shock. Singapore for instance started from 3% to 5% to 7% (current). Let’s put it out there that lots of countries have much higher rates compared to us (though it also depends on what type of goods). We’re one of the lowest in the world. 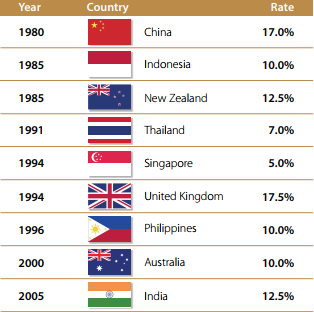 Soooo… with the return of SST, we’re sure lots of people have the same question on their minds: Will prices drop?

Unfortunately there is no simple answer to this one, it really depends on the levels there are in the product supply chain. It’s won’t be the same for cars, mobile phones, or food. You can probably expect prices to adjust differently based on the type of good or service being paid for. The only thing to do is to wait and see just what kind of rates our government will set for the upcoming SST, and what items will/will not be affected.

Share this article:
NAH, BACA:
The govt took RM54 billion from Petronas, and Petronas might not be able to afford it.