If there’s one thing the pandemic has done to us, it’s that we’re conditioned to check for the daily updates on the Covid-19 situation in Malaysia. Like, can you really go a day without seeing Dr Noor Hisham?

However, while we were going thru the new numbers being reported, we couldn’t help but notice something: If you take a closer look at case number 352, the deceased man is… 130-years-old? Honestly, the initial reactions within the office was that it had got to be a typo. But as more and more people began noticing the 130-year-old man’s death, as it turns out that was no mistake. The Ministry of Health has indeed confirmed that they recorded the man as 130 because…

He had no official documents to prove his identity

Among those who had also pointed out was Malay Mail’s Zurairi A.R., who had tweeted to the Ministry of Health wondering if that was a typo or not. We guess whoever’s managing MoH’s Twitter account probably got tired of all the people tweeting them, because at 1am(!), they replied to Zurairi, stating that there was no error on their part. Instead, the deceased’s next-of-kin claimed he was 130, and even a police report listed him down as 130-years-old.

It was later revealed that the deceased was named Talib Omar, and his daughter Kimri maintains the claim that her late father was old enough to have been born in the nineties – 1890s, that is.

According to New Straits Times, Talib’s daughter had a document to prove his age, and that – prior to Covid-19 – he was still in good physical condition.

“He was indeed 130-years-old based on a document he had. My father was still healthy and even visited me in Kota Kinabalu last Raya,” – Kimri Talib, as quoted by NST

She also clarified that her father had passed earlier on November 3rd, and they only found out that he had Covid-19 after tests by the authorities. This checks out with what the Ministry of Health said in their reply to Zurairi on Twitter, as they mentioned that the case was a ‘BID’, meaning he was ‘brought in dead’. Kimri with her late father Talib. Image from NST

Now officially speaking, the oldest person to ever live was a French woman by the name of Jeanne Calment. Calment had lived to the age of 122, having been born in 1875 before passing away in 1997. We’re talking about her being old enough to have met Vincent van Gogh when she was 13-years-old!

“Van Gogh was very ugly. Ugly like a louse. We called him le dingo,” – Jeanne Calment, on meeting van Gogh, as quoted by New Yorker Had Talib Omar’s age been verified, it could have meant that the oldest person to have ever was a man living in Sabah! It also would’ve bucked the trend of women being the oldest people, as currently all 10 of the oldest *verified* people ever are women.

Incidentally , this would not be the first time someone from Malaysia had a claim to the title of oldest human ever (we know Talib had no official documents but you get what we mean #ihatecilisos). Back in 1998, a certain Omar Abbas made headlines because he was alleged to have been 140 years old! Unfortunately for Omar, because Malaya only began using birth certificates in 1926, it was tough to be certain of his claim. There was also the case of Puan Ahmad who in 2017 claimed to be 120 years old, which if it had been proven, would’ve made her the oldest then-living person alive. 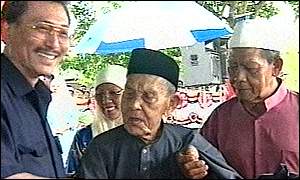 As for Talib, it is perhaps a tinge sad that we only found out about him and his long life due to tragedy befalling him. The least we could do right now is to continue practicing good hygiene, social distancing and minimising unnecessary contact with others so that fewer and fewer Malaysians, especially those at higher risk such as Talib, would find themselves threatened by Covid-19.

Share this article:
NAH, BACA:
6 viral stories in Malaysia that were actually FAKE