We all know that if you walk around outside without wearing a mask right now, you’re gonna get fined. The compound for breaking MCO SOPs can be steep, and hundreds of people kena every day. But how many people have been compounded this year, exactly? That’s the question we wanted to answer last week, so because we have nothing better to do, we began collecting data on that.

However, as we’re analyzing the data, we noticed something strange…

After finding out how many compounds got issued each day for this year, finding the average for each week and plugging all that into Excel, this graph came out: Now where have we seen that shape before? Oh, right. You know that graph that MalaysiaKini maintained? The one that shows new Covid-19 cases daily? It had a similar shape: Just to make sure we’re not seeing things, we superimposed our graph on MalaysiaKini’s graph, making sure to line up the dates as close as we can: That’s a pretty interesting coincidence… or is it? What do MCO compounds have to do with Covid-19 cases? Sadly…

We can’t find a proper explanation for it, but we have theories

First, in case you’re wondering how we came up with that first graph, we had to comb news reports where Datuk Seri Ismail Sabri (Senior Minister for Security) announced how many people kena saman for MCO violations in police operations every day. While we can’t find a solid number for some days, we managed to scrounge up data for compounds issued for 166 out of the 171 days between Jan 1 and Jun 20 this year.

Dubious/missing days are marked in red.

Looking at the data table above, it’s obvious that there’s a period where the amount of compounds issued were very low, like in double digits. To look at the trend, we averaged out the number of compounds each week and plotted them out on a weekly graph like you see up there. The most noticeable dip happened between weeks 12 to 16 (between Mar 15 to Apr 18).

No explanation was given for the dip, even on days with particularly low compounds like Mar 20 (6 people) and Mar 31 (2 people). While we didn’t manage to get the data on the number of inspections carried out for every day, it doesn’t seem to be a factor: 48,495 inspections were carried out Mar 31 (2 people compounded), and 48,316 inspections happened on Jan 1 (1,352 compounds, highest this year). So with that in mind, we’ve come up with several theories.

Theory #1: The dip happened because we entered a different kind of MCO

One theory we had was it was due to a shift in the type of MCO, since different MCOs have different violations. However, the Recovery MCO lasted since last year up to Mar 31, and between that and the total lockdown starting Jun 1, MCO happened by states. The dip happened in the last weeks of the RMCO and continued for a couple of weeks afterwards.

It didn’t fit perfectly, or in other words, there doesn’t seem to be a correlation between the MCO dates and the low compound weeks. Theory rejected.

The above paragraph in visual form. A RM10,000 compound for not wearing a face mask properly. *shudders* Img from Coretan Diari Viral.

Due to people not being scared of the RM1,000 compound, on Mar 11 the government decided to raise the maximum amount of the compound to RM10,000. That’s 10 times as painful as the previous amount, so maybe the police got more careful when it comes to handing out such big fines, leading to fewer compounds issued. Or maybe the people got more compliant.

NAH, BACA:
Mak Cik Kiahs show us how much $$$ they lose if they can't buka kedai for one day

However, if you look closely at the data table above, the first incidence where the number of compounds issued dropped to double digits was on Mar 17 (54 compounds issued). Something else happened on Mar 17: because people complained that RM10,000 is too much, the government had introduced a tiered list that serves as a guide on how much you can get fined for various offenses. Many of the compoundable offense falls under Tier 3 of the list, which mostly means a RM1,500 fine.

So the number of compounds dropped after the RM10,000 scare was resolved, which doesn’t make sense either. Theory also rejected.

Theory #3: The police got more strict/lax depending on the number of new Covid-19 cases Or rather, they were told to be more lax. We do know that issuing compounds is one way the government is trying to control the pandemic, and there’s a possibility that enforcement might be tightened or relaxed based on the current situation, hence the similar trends in both graphs. According to former IGP Tan Sri Abdul Hamid Bador at the end of April, they were told by politicians to relax enforcement at roadblocks due to the traffic jams caused, and that caused the number of cases to rise again.

“I was told to relax (enforcement at roadblocks). And now, you see the emergence of many Covid-19 clusters. What I fear the most is that cases will continue to surge above the 3,000-mark as warned by (Health director-general Tan Sri) Dr Noor Hisham (Abdullah),” – Tan Sri Abdul Hamid Bador, to NST (April 30).

It’s not unthinkable that traffic jams due to roadblocks were seen as an unnecessary nuisance during times of low daily cases, and with the public complaining about it, it’s possible that the police were told to chill and not be so thorough; and once the cases shot back up, enforcement was tightened again. That would explain why both the graphs for new cases and compounds issued have similar trends. It might also explain why the trend for compounds seem to be ‘lagging’ behind the number of cases: cases would go down first, and the number of compounds would follow after. 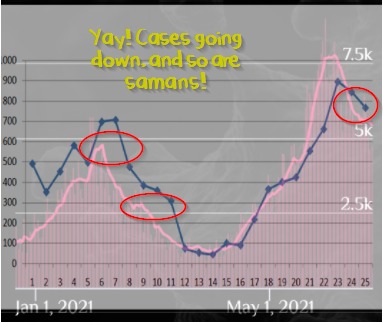 ‘Lagging’ parts of the trend, circled.

Still, it’s just a theory, and correlation doesn’t necessarily imply causation. Without further information, your guess is as good as ours at this point. Still, whatever the reason was, there’s something we haven’t talked about yet…

Waitamin… Shouldn’t the number of compounds issued decrease over time?

But the numbers showed otherwise. If you look at the graph, the number of compounds issued recently is higher than at the beginning of the year, even after the compound amount had been increased to RM10,000. Looking for some kind of improvement, we went back to the very first days when the police started compounding people for violating the MCO (April 2020), and for the first five days, the daily number of compounds issued had been 95, 392, 815, 854, and 949.

In other words, after more than a year of compounds, there doesn’t seem to be any lasting improvement at all. Is it because compounds won’t stop offenders? Is it because we measure success by the amount of compounds and enforcement carried out? Or is it because the compounds aren’t meant to deter people to start with? One can only guess at the reason behind this. Clearly, something’s not quite right here, so it’s an issue worth looking into.