How cool would it be to have your a satellite that you built yourself zipping around in outer space? We don’t know that, but maybe two Universiti Teknologi Mara (UiTM) students do. Syazana Basyirah Mohamad Zaki and Muhammad Hasif Azami, from the Electrical Engineering Faculty of UiTM, was reported to have launched a satellite that they designed and built themselves into outer space last Friday (29th June 2018).

The satellite, named UiTMSAT-1, will make UiTM the first ever public uni to have its own satellite in outer space!

“I think that this is a monumental achievement and it should be the beginning for UiTM to go to the next level and it is hoped that many more high-impact projects can be produced as they will surely benefit the university and the country,” – Prof Emeritus Datuk Dr Hassan Said, UiTM’s Vice Chancellor, translated from mStar.

The launch took the satellite to the International Space Station (ISS), where it will be kept for a while before being released into orbit in August. Once it does, will zip around the earth seven times in a single day, at speeds of up to 28,000 kilometers an hour.

But if you’re imagining one of those large satellites that collect the sun’s rays and fire laser beams to anywhere on earth, well, it’s not quite that la. For starters… For starters, UiTMSAT-1 is kinda tiny. It’s basically a cube measuring 10 cm × 10 cm × 10 cm, which is about the size of an unused toilet roll. Despite the size, the satellite was reported to be equipped enough to handle six missions:

These missions are expected to benefit some 2,500 of their faculty’s students. It’s impressive what science can do, but tiny square satellites are not really a new development in space science. The concept of CubeSats (satellites with the standard 1000 cm³ shape or a combination of these) had been around since 1999, and as of May this year at least 875 of them had been launched into space. Besides UiTM, another local university had looked into launching satellites of their own.

There were traces of a Universiti Sains Malaysia (USM) project named MYSat, which is also a CubeSat that aimed to collect data from orbit that may help detect earthquakes. The whole project cost was estimated to be around RM25,000, and it was expected to be launched sometime this year. However, we’ve failed to find any other information related to the current status of the project. The last post on MYSat’s social media page had been in January last year. 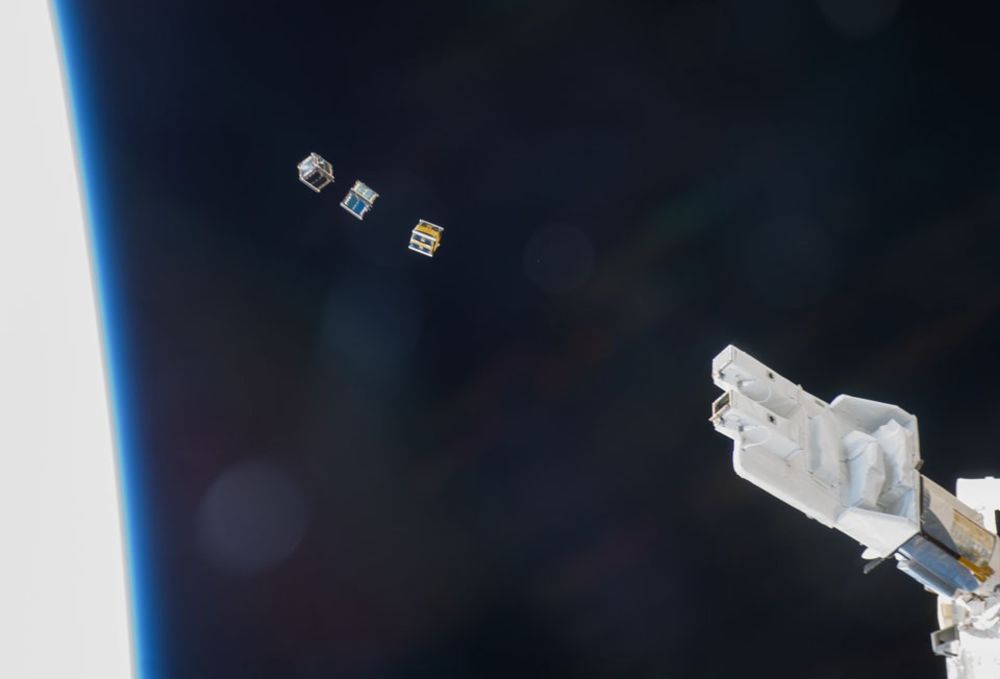 CubeSats being deployed into orbit, but imagine more of them in the background. Img from Popular Science.

Outside of Malaysia, universities, business organizations, corporations, and even elementary schools have managed to successfully build and launch their satellites, for various purposes like education, communication and research. Standardizing the shape and size of CubeSats had made the components for it much cheaper, and constructing a CubeSat had been relatively affordable since.

How affordable, you may ask?

Theoretically, you can have your own working satellite for RM450,000 or less Elementary students from the St. Thomas More Cathedral School in Virginia, US, working on their STMSat-1. Img from NASA.

UiTM’s vice-chancellor Datuk Dr Hassan had quoted the price of the satellite-building materials alone to be around RM500,000, but theoretically it can be less than that. Popular Mechanics have cited the total cost for universities to develop, build and launch their CubeSats to be under $100,000 (RM404,340), but generally the cost of launching your own private satellite is based on three things:

So we won’t be covering the costs associated with research (if you’re planning on some fancy add-ons to your satellite), airplane tickets, licensing and all the smaller stuff. Anyways, as we’ve said before, CubeSats have gained some popularity over the years, so in a sense people have found a way to make it more affordable and easier to build. There are some sites where you can get yourself a CubeSat kit, and the cheapest one we’ve found cost $7,500, or about RM30,400. Or you can improvise like these Indian students. Img from Amsat India.

There are basically two options to consider. The first one is getting your satellite on a ride-sharing service into space, offered by private launch companies. Your satellite will be carried into space along with other similar satellites, and some sites estimate the cost to be typically around $40,000 (or about RM162,000). The one company we found will cost around $77,000, or about RM399,900.

Hoo-eee so expensive! But if you’re willing to put in a lot of work, you might try the second option: convincing an agency to let your satellite to hitch a ride on their rockets. Some space agencies, like NASA, may offer to launch your satellite for free if you can convince them that your satellite will benefit science or something. You’ll probably have to look around for this one.

So if you take the cheapest of everything and be a pessimist about NASA not being impressed, we can theoretically launch a private basic CubeSat for about RM432,000, or little less than the price of a 2018 Ford Mustang 2.3 Ecoboost. But still, it all sounds like a lot of work, so…

How on earth did the UiTM students do all of this? Results from the first BIRDS program. Img from SpaceKate.

Well, they didn’t do it alone. The satellite was built under a program hosted by the Kyushu Institute of Technology (KyuTech), called the “Joint Global Multi-Nation BIRDS Satellite Project” (BIRDS).  In this program, Japan basically supports and guides the design and building of satellites by university students from non-space faring countries, and UiTM had participated in the second BIRDS program (BIRDS-2).

The first BIRDS program had been participated by Ghana, Mongolia, Nigeria and Bangladesh, and all five countries (including Japan) built identical satellites and launched them as a constellation (a bunch of satellites linked to each other) in 2017. Besides Malaysia and Japan, Bhutan and the Philippines had also participated in BIRDS-2, and the upcoming BIRDS-3 will be participated by Nepal and Sri Lanka.

As the program had been a collaboration with Japan, the satellites in BIRDS-2 was launched to the ISS together aboard the cargo rocket SpaceX Falcon 9 from Florida, US. So basically it’s more of a joint project rather than a lone achievement. Regardless of that, the purpose of the BIRDS program had been to educate the participants in the process of satellite development all the way from planning to disposal as well as getting different countries to establish a sort of support group in advancing each other’s space programs.

Participants of the BIRDS-2. Img from BIRDS2.

UiTM’s achievement may have come at a good time, as…

It may revive Malaysia’s passion for outer space We did a thing back then where we asked Malaysians what they would bring to space. Check it out here!

It had long been a dream for Malaysia to advance in the space sector, as evidenced by the establishment of our own National Space Agency (ANGKASA) back in 2002 to lead researches in space science and help the government in drafting a National Space Policy. However, space interest in Malaysia had stretched as far back as 1989, when the Planetarium Division was established under the Prime Minister’s Department.

Since then, Malaysia had accomplished several milestones in space technology, such as launching Southeast Asia’s first space center in 2006, recently completing its National Space Policy, having several satellites up and running, and having sent an ‘astronaut’ into space through its Angkasawan program, although whether we have an astronaut, cosmonaut or a flight participant is up for debate. But in more recent times, things aren’t looking to bright.

Professor Emeritus Datuk Mazlan Othman, Malaysia’s first astrophysicist, had revealed in an interview that our space industry have been regressing. This, she said, can be seen in how we no longer have programs that build our space capabilities and how we are not building satellites.

“The saddest part is that other countries have forged ahead. Around 2004, our space programme was the envy of several countries, especially the African countries. There were even countries that were concerned about our capabilities. But today, some of these countries have surpassed our achievements.

“A few months ago, Singapore launched six small satellites, doing the things that I thought Malaysia should be doing. Vietnam is catching up with us. Nigeria has their own facilities. Thailand and Indonesia are ahead of us. We may be trying hard but we have regressed.” – Professor Emeritus Datuk Mazlan Othman, in a 2016 interview with the Perdana Leadership Foundation.

But still, we’re trying. ANGKASA had announced last year that they have equipped themselves with cutting-edge technology to prepare for Malaysia’s space plans. Even outside of ANGKASA, some Malaysians have been making strides in space science, like Nur Adlyka, who co-discovered a supermassive black hole in our cosmic backyard while pursuing her PhD in the UK, and Mohd Izmir Yamin, who heads a team that plans to put a rover on the moon without the government’s help.

While the real star of the BIRDS program had been Japan, with the knowledge and experience gained from the program, the students involved with the UiTMSAT-1 may one day be able to build 100% Malaysian satellites.