If you’ve been a frog under a coconut husk and have not heard of Ibrahim Ali, here’s a bit of background info – He’s the president of Perkasa, a non-governmental organization (NGO) focusing on Malay rights.

During the Perkasa general assembly on Sunday, Ibrahim Ali lashed out at his critics in UMNO and proclaimed himself as a hero to Islam and the Malay people. Without mincing words, we’re just going to put it out there: Ibrahim Ali is NOT a hero to Islam and the Malay people.

Ibrahim Ali  is a hero to ALL of us.

Yeah. We said it, and we know we’re going to get a lot of hate for it (#ihatecilisos); but at least hear (read?) us out. Because you just might change your mind as much as we have because… Image from The Nut Graph

No joke. Consider the following points (Condensed from an interview with The Nut Graph) :

So as you can see, his origin story shares many similar traits with a certain animal-inspired superhero…. Spiderman. Superman was a close second, but Ibrahim Ali was missing the spandex shorts. THIS IMAGE IS PHOTOSHOPPED. DON’T SUE US.

While Perkasa and, by extension, Ibrahim Ali have been criticized for being extreme in their fight for Malay rights, not many know that he’s been looking out for the best interests of the Chinese and Indians as well.

For example, during the Bersih 2.0 rally in 2011, he mentioned that the the Chinese community should stock up on food if chaos were to erupt from the rally. While initially seen as a veiled threat of racial violence, he had clarified that he was taken out of context and that he was merely sharing advice. According to Ali, the Chinese usually don’t participate in demonstrations, and any clashes would involve the Malays from PAS/UMNO/Perkasa so they should probably stay indoors as much as possible to prevent any potential violence from spilling over. He’s not all talk too… he himself did not attend the rally for a reason we will cover in another point.

Another instance of this is when he asked for the ISA to be reinstated to “protect the Chinese and Indians from Malay anger.” Considering that he’s been in the ISA twice – once for the 1974 demonstration mentioned above and another in 1987 during Ops Lalang – we don’t think he’d be advocating something like that unless he truly believes it’s for the better good of all Malaysians.

Also, like fellow CILISOS hero Bung Mokhtar, he isn’t afraid to speak up against UMNO as well, since one of the reasons Perkasa was formed was to be an independent watchcat over the ruling party’s administration. In fact, he was sacked from UMNO “for life” in 2004 for running as an independent against an UMNO candidate. The most recent example of him holding the government accountable was during the Perkasa assembly where he pretty much called Prime Minister Najib out for “going on too many overseas trips” when he should be staying back and doing his job.

3. He is a champion of the poor Yes, yes… “Only for poor Malays,” that’s what you’re probably thinking as you read the header. But you couldn’t have jumped further from the truth. While the Ibrahim Ali does focus a lot on the economic standing of the Malays, he’s seeing in terms of the 30% of Malaysia’s economic pie as outlined in the New Economic Policy (NEP).

“Not that we want to deprive other races. Affirmative action will also benefit other races. The NEP clearly stated that poverty eradication is regardless of race. … That’s why I say don’t blame ethnic policies. It is corruption and bureaucracy” – Quoted from an interview with The Nut Graph

In a gesture of goodwill in 2012, Perkasa organized a Chinese New Year open house for residents and senior citizens of Kampung Baru, where they also gave out about RM10,000 worth of angpaus. Except… well, the angpaus were pekpaus. (“Pek” = “White” in Hokkien)

Usually, this wouldn’t be an issue if not for the fact that white angpaus are used in Chinese funerals. Ibrahim Ali and Perkasa were accused of doing this on purpose, that there was some hidden intent in those little white packets. Perkasa has since gone on to say that the only thing hidden in those white packets were money (our paraphrasing), as neither the organizing committee nor Ibrahim Ali knew of the significance of the white packets.

We give Ibrahim Ali the benefit of doubt on this – there was a very small Chinese population in his kampung and therefore he didn’t have many Chinese friends growing up.

4. He is a defender of women

Back in July, there was a pretty well-documented case of road rage in which a driver used a steering lock on the car of another driver. Hearing this, Ibrahim Ali and Perkasa leapfrogged to the rescue of the poor woman who was involved – Kiki Kamaruddin. 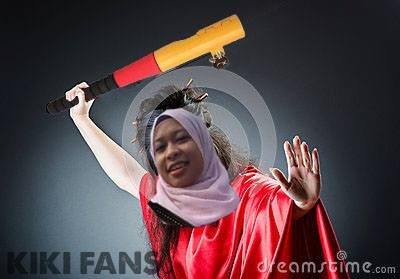 Found guilty of bad car-acter (not the actual offense), she was fined RM 5,000 and sentenced to 240 hours of community work; all this on top of the memes and jokes made at her expense which drove her to beg the public to leave her alone. Percarsa started a fund to help her pay the fine, and signed her on as a member some time later.

It’s not just to the public too… Remember how we mentioned two points ago that Ibrahim Ali didn’t attend the Bersih 2.0 counter-rally? It’s because he listened to his wife, who didn’t allow him to go. Do note that we really can’t really verify the sources on this, so it might not actually be true.

The header might be a bit of a giveaway, but have a look at the image below and see if you can spot a familiar face: UiTM Board of Directors

If you failed to spot it, that’s Ibrahim Ali on the lower right. Yep. He’s a committee member at Universiti Teknologi Mara, doing his best to ensure that a vast pond of knowledge is available to higher education students. He also at a time personally sponsored the Ibrahim Ali Award, an award to recognize UiTM students who have done their best in “upholding the reputation and honor of their race.”

Unfortunately though, this award was criticized by quite a few people including both opposition and UMNO members, so UiTM eventually clarified that the award was NOT approved and that the uni’s Institut Pemikiran dan Kepimpinan Melayu (IMPAK) kinda jumped the gun on the announcement. Who needs a Datukship when you have a selfie with Fidel Castro? Image from The Nut Graph

For someone in Ibrahim Ali’s position, we would think that there would always be a chase for wealth and fame; and what better indication of wealth and fame is there in Malaysia but a Datukship or a Tan Sri-ness? But no, not Ibrahim Ali.

When his Datukship was stripped by the Sultan of Kelantan in 2010, he took it in stride, saying:

“I am good friends with him but I have no qualms at all (about the revocation of the title). Such matters are small to me. I am a fighter and I am consistent in upholding the royal institution. My loyalty towards the new Sultan (Sultan Muhammad V) is undivided.” – As quoted in The Sun Daily

What matters is that he works according to his beliefs, titles or not.

However, he did say that we can still feel free to call him Datuk if we want to. Or if not also okay. It’s all cool, bro.

What makes a hero?

If we go through the backgrounds of most superheroes, it’s hard to argue that most of them have a trait of not playing by the rules and perhaps even be mistrusted by parts of society.

Ibrahim Ali has hopped political parties so many times that he’s somewhat like a political amphibian. He calls himself moderate but is willing to bring up topics that aren’t going to gain him popularity points. He’s been knocked down more times than we have space to list, but he’s still fighting what seems to be an endless battle, like in one of those old arcade games. So yea. Maybe he IS a hero. After all, in UMNO’s “weakened state” people are already asking him to form a league of superheroes (by which we mean to turn Perkasa into a political party) to save our country.