Normally we’d be excited for Christmas this time of the year (or in this writer’s case, for Star Wars. Mei de fos be witchu), but let’s give some thought to another event where red is the colour. Yes, it’s time again for the UMNO General Assembly!

Some of you may be going ‘aiyahh, this thing still around ah?’ But to be fair, it wouldn’t be entirely your fault. Admittedly, what used to be an eagerly anticipated event for all Malaysians has lost some of its grandeur in recent years.

It’s a bit like watching Manchester United these days: a packed arena filled with red shirts, but all the players are just looking to pass the ball around the back without actually achieving any sort of result (it breaks my heart as a United fan to say that, believe you me). Unfortunately, United’s latest results mean that images like these are few and far between nowadays. And yes, that’s exactly who you think it is. Image from: says.com

However, that doesn’t mean that the UMNO General Assembly is a boring event by any means. Quite the contrary, in fact; in recent years we have seen our fair share of colourful characters do some really interesting, weird, and sometimes downright outrageous things.

Here, we whip out our fancy CILISOS Crystal Ball and discuss 5 things that are bound to happen during the upcoming UMNO General Assembly happening next week (from the 8th-12th of December 2015).

1. A ‘Pahlawan Melayu Terakhir’ will raise his keris (and many others will raise fists) 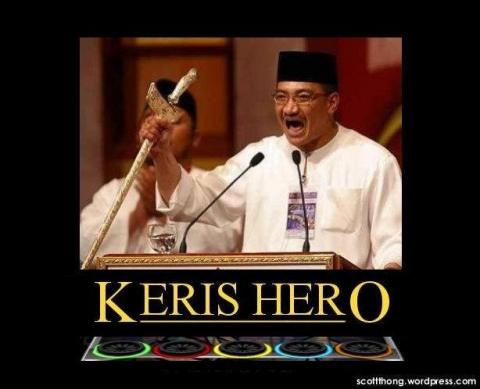 Available now on all consoles! Pre-order now for the Tanah Melayu DLC pack! Image from: weehingthong.wordpress.com

… a.k.a the Malaysian equivalent of an American redneck screaming ‘yeehaw!’ while firing his gun into the air. Of course, in a Malaysian context, keris-lah, pun boleh. 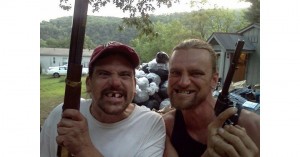 Granted, the last time we saw an actual keris being brandished at an UMNO event was 10 years ago, but recent developments have seen the revival of the keris – as a concept, at least.

Last year, Dato’ Seri Dr. Zahid Hamidi announced the ‘KERIS 2314’ (sounds like a pretty cool name for a futsal team) training module to “create future UMNO leaders and rejuvenate the ‘sacred’ party of the Malays.” And of course, everyone remembers those Red Shirt Rally posters. If it makes you feel any better, flying through the air like this is a totally impractical move in most martial arts. Show-offs. Image from: helpvictor.blogspot.my.

While it looks like the keris-wielders have learned their lesson, it still is a significant symbol of UMNO’s power, so expect to see/hear some reference to it. #JustKerisThings 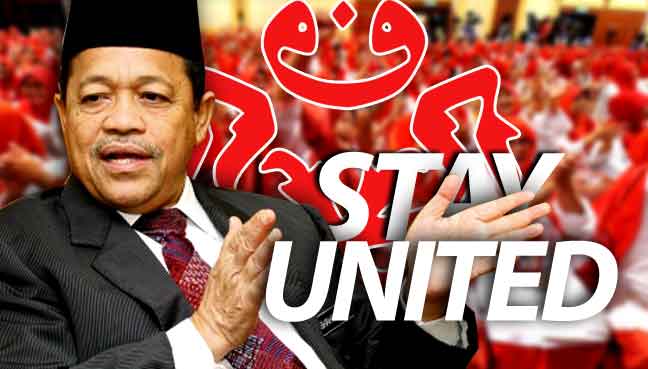 UMNO seems to have some sort of love affair with the word ‘protect’. In fact, a quick Google search for the phrase ‘UMNO protect’ yielded the following headlines:

So what exactly is UMNO’s infatuation with this word ‘protect’? It’s simple really. One needs to look no further than UMNO’s Constitution, which can be viewed in its entirety here. But for those of you who say “TL; DR” (lazy buggers), UMNO’s purpose of existence reads as follows (translated from Malay, kalau salah sorry ye):

“… to struggle for the upholding of the ambitions of Malay nationalism in order to preserve the dignity and prestige of race, religion, and country.”

In other words, to protek-lah. See? It’s even in their Constitution. I think it’s safe to say we’ll be hearing this term a lot during the upcoming general assembly.

3.  Someone will say something totally WTF There’s always that one guy at every party who tries to be ‘the one to remember’ by pushing the limits of what is considered ‘politically correct’. Usually it’s by using some controversial gimmick or comment to evoke emotion or, you know, just piss people off.

At last year’s General Assembly, Datuk Seri Dr. Ahmad Zahid Hamidi volunteered as tribute to play this role, going as far as showing a video of an execution by Islamic State during the general assembly to justify the recently-approved, equally controversial Prevention of Terrorism Act 2015. Talk about viewer discretion.

“We do not want this situation to happen, which is why we need the new Act.” – Zahid Hamidi, as quoted by The Malaysian Insider.

While this is getting as normal as a typical Malaysian humid day, there are some that are hazier, and come almost like clockwork at the same time every year…

NAH, BACA:
5 easily-fixable problems that made GE14 a lot harder for Malaysians

4. Khairy will say something quite un-Khairy Here’s a typical quote we cheer Khairy for, as a rare, surviving champion of moderation in UMNO

““I want to let the Chinese know that this is an MP that does not represent the Malays (as a whole). We are (a) noble (people).” – Khairy in response to Ibrahim Ali’s May13 warning to Chinese in 2011, FMT

And here’s what we’ve come to expect during UMNO General Assemblies.

“Today we gather because we know that if we do not do something, then this power which we have been bestowed with, which directly benefit the people, will not remain” – Khairy at UMNO GA 2011, The Sun Daily

“We have endured this for so long. Beware, when our pride is challenged… Malays are not ones to be challenged or insulted. We take care of this country for all Malaysians, but don’t question our rights” – Khairy at UMNO GA 2014, Malaysian Insider

5. Someone will complain their words kena ‘taken out of context’

Before we begin talking about this, a bit of context:

“In public relations, spin is a form of propaganda, achieved through providing an interpretation of an event or campaign to persuade public opinion in favor or against a certain organization or public figure.” – Wikipedia

Like vaping, ‘spinning’ stories in the media has earned itself a space in the gomen’s bad books. It comes as no surprise then, that there was a big hoo-hah over supposed media restrictions to, yep, you guessed it, protek the people. 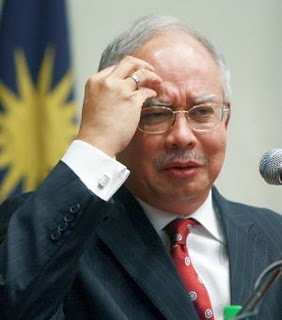 “You spin so much until my head also spin-lah.” Image from: The Rocket

But to be fair, sometimes their quotes do get taken out of context, like last year’s mega poopstorm when Khairy seemingly fell from grace as the ‘voice of reason’ in BN. 6. And Mahathir will RSVP last minute In recent years since his retirement, Dr. M has been playing with everyone like contestants on The Bachelor!

“Delegates speculate if the godfather shows up or not. In a single statement he can shift the discourse and focus of the whole party.” MalaymailOnline on Mahathir at UMNO General Assembly 2014

After long periods of spekulasi on media channels, The Boss himself Tun Dr. Mahathir announced that he will indeed be accepting the invitation to attend the upcoming general assembly.

This, after calling the event ‘futile’, because, well, too much protek-tion. To add to the powerful UMNO starting lineup for the big day, rebel ex-Deputy Prime MinisterTan Sri Dato’ Muhyiddin Yassin has also confirmed his attendance. Adding cherry to the cake is the fact that he will be seated next to Ah Jib Gor, the very man who fired him!

So you can probably expect some serious fireworks, which we talked about in our previous article, “4 SIGNS UMNO MIGHT BE EXPECTING CIVIL WAR AT ITS GENERAL ASSEMBLY”, and is probably why rumours circulated earlier that media might not be invited.

On top of that, here’s some food for thought though… 13 UMNO chiefs have refused to back him during a recent division meeting (keep in mind that in political meetings such as these, 13 is a BIG number). Anina Saadudin, a former UMNO party member sued Najib over the RM2.6b controversy. Let’s not forget Khairuddin who went all over the world to lodge police reports against 1MDB. Adding fuel to the fire is the fact that there are anti-Najib squads being formed within UMNO itself, with some having sprung up from Najib’s treatment of Muhyiddin.

All in all, the total number of UMNO members who have openly spoken up against Najib currently stands at 51 members. That’s A BIG number (not yet tambah GST also wei). 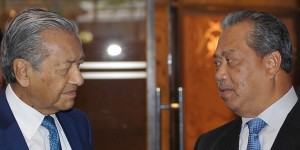 Will there be anyone tabling motions against him at the coming General Assembly? Well, maybe not since according to UMNO’s Constitution…

….the President of the party is protek-ted from motions of no confidence during the General Assembly.

As such, it may end up being a ‘spiral of silence‘ (increasing pressure people feel to conceal their views when they think they are in the minority). However, if UMNO members are bold enough to go public with their stand against Najib, we can’t quite say. But in any case, it would be interesting to view how Najib deals with the increasingly hostile environment next week.