[This article was originally written in BM by our SOSCILI fwens. Click here if nak baca.]

Our country has all kinds of trains. KTM, LRT, Monorail, MRT and yet to be done, the East Coast Rail Link (ECRL). For as long as y’all have boarded these trains, have you wondered which train track is the longest? According to a report, ECRL is the country’s longest train project, with a total distance of 688km!! The ECRL would pass thru Kelantan, Terengganu, Pahang, Selangor and KL.

This railway starts from the Integrated Transport Terminal (ITT) in Gombak, Selangor and ends at Pengkalan Kubur, Kelantan. Before this, if you wanted to go to the East Coast from the West Coast by train, it would take like 8 to 12 hours to reach. But with the ECRL, the journey is shortened to 4 hours! Sounds awesome…

But then, as you’ll see in this article, decisions regarding the ECRL have been changing since our country became Malaysia Baru. If like that, then what is the status report of the ECRL project? Yay or nay? But before we go there, we first need to understand some of the fundamentals about the ECRL that has caused it to be so heavily debated…

The ECRL Project used bank loans from China to pay the Chinese contractor?

Before we jump into the status matter, let’s recap why there were peeps who objected to this project. The Star said that 85% of the money used to cover the project cost were loans from the Export-Import Bank of China (Exim Bank) while 15% were from Islamic bonds, so most of the money would be paid back to China.

And since the contract was given to the China Communications Construction Company (CCCC) after direct negotiations without any open tender (although Malaysian companies have delivered on rail projects before), CCCC would be the one reaping the profits. Kinda ironic for a Chinese company with four Cs as its initial.

Prof Jomo Kwame added that much of this money is coming from our Malaysian taxpayers, so Malaysia would bear all the risk while China benefits! Azmin Ali also shares the same view, saying that mega infrastructure projects involving foreign contractors that are burdening the nation’s finances will only benefit foreigners and not the locals. But there were also those who disagreed with proposals to cancel this project because it might help boost the East Coast’s economy. Though Prof Jomo Kwame said that it won’t be becos this ECRL is no ordinary train but a high-speed train. And in Europe, China and Japan, there is still hardly any proof that high-speed railways give jobs and businesses along the railway.

According to him, this project is only profitable to certain people and would be better if the federal government’s financing, which was previously blocked, was given back to the east coast states for development. This includes using the existing Kemaman-Kuantan train track and the East Coast train from Gemas.

Well, what was the initial status of this project? We’ll break it down into… err… ‘episodes’ since the ECRL project a bit drama la.

The ECRL was the brainchild of Najib’s administration

On 21st October 2016, the cabinet gave this project proposal the green light. Engineering, procurement, construction and accreditation agreements have been signed with CCCC as the main contractor on 1 November 2016. Meanwhile, the ownership of this project was given to Malaysia Rail Link Sdn Bhd (MRL), headed by Tan Sri Dr Irwan Serigar Abdullah (former Secretary-General of the Finance Ministry).

See? They made an agreement. Image from Malay Mail.

The ECRL construction cost was then announced to be up to RM55billion. Once all settled, the inauguration of the ground breaking (literally) ceremony was launched by Najib on 9 August 2017. The ceremony was just for symbolic’s sake cos the project was scheduled to start in July 2017 itself.

The first phase works covered around 600.3km from Wakaf Bharu to ITT Gombak while the second phase covered from ITT Gombak to Port Klang. The estimated time of completion is the year 2024 (and we thought that 4 years after 2020, there would be flying cars by then. Haiizzz…).

Project status at end of this episode: First phase started, 13% of the initial work already done by March 2018…

When PH took power, the real cost of ECRL got exposed!

As we all know, Barisan Nasional (BN) lost the GE14 when the ECRL was still in progress. So many wondered… what would happen to this project under Pakatan Harapan (PH)? Before GE14, PH didn’t reject the possibility of stopping the ECRL project if they won the elections this year. A feasibility study for this project would be done to check if need or not. If no need, then it would be stopped at what’s been done.

NAH, BACA:
Why did this ex-BN Minister switch positions 5 times? And now he's with DAP!

In May 2018, the ECRL issue resurfaced when the Chairman of the Government Advisory Council, Tun Daim Zainuddin announced that the cost wasn’t RM55billion. Apparently, the actual cost was RM66billion after summing up the first (RM55billion) and second phases (RM11billion)! In June 2018, the Finance Minister Lim Guan Eng announced that the ECRL project will be continued until discussions about the cost are concluded. To stop also kenot cos the previous govt already paid RM19.68billion so must discuss again. In July 2018, Lim Guan Eng announced that the TRUE cost went up to RM80.92billion! This includes costs for land development, benefits, fees and other operational expenses. Damn expensive weih!!

Project status at end of this episode: Still running but the actual cost is recalculated and exposed…

Rugilah if this project is not suspended

After the real cost was announced, MRL gave a notice to CCCC to STOP ALL WORK for the project. The CCCC fellas were so sad but still respect and follow our country’s laws. Meanwhile the MRL fellas say that the suspension will go on until they’re informed later. This suspension may not mean that the project got cancelled, but it did take a toll on the jobs of the CCCC-ECRL staff.

The PM’s special messenger Tun Daim was sent to meet China’s Foreign Minister Wang Yi to renegotiate the costs of China’s mega projects in Malaysia including ECRL. Within the same month, a raid was done by SPRM on two companies in the Klang Valley including those in charge of the ECRL project. Lim Guan Eng said that if the project is not postponed, the govt has to bear the operational costs of between RM600million to RM1billion annually! At this point, Malaysia and China haven’t decided whether to continue with it or not, but Guan Eng acknowledged that the relationship between Malaysia and China got closer after Tun Daim’s visit.

Project status at end of this episode: The project is sorta postponed cos wanna renegotiate…

On 17 August 2018, a few folks of our Mahathir-led govt made a 5-day visit to China. Before this visit, our Foreign Minister Saifuddin Abdullah said that this visit was to discuss about the ECRL project status.

However, this visit resulted in 5 MOUs being agreed upon between the two countries and they were currency exchange, exports of frozen durians (?!), biofuel made of Malaysian palm oil, rubber-based bitumen tech for roads as well as accounting and auditing co-op. You may be wondering, what lah happened to talking about the ECRL? Chill, we’re getting there. When Mahathir went to China… Image from Urdu News.

From the visit, it’s been reported that the ECRL project is cancelled after our govt told the Chinese govt about our probs. The “Nice Chinese” govt were pretty understanding about our situation but the decision to cancel may cause Malaysia to pay a compensation according to previous govt negotiations. So more negotiations will be carried out to find solutions to exit this project with the lowest possible compensation.

“This is stupidity of the negotiation before. There must be exit clauses in all agreements and the exit clauses must be fair for both parties. He (Datuk Sri Najib Razak) is the one…I never see a contract (like this before), that money (is) paid before the work (gets) done….What kind of stupidity of this, (you need) to pay on time, without any conditions that work must be done,” – said Tun Dr M.

Project status at end of this episode: Cancel but must find a way to pay a lower compensation…

So, is it officially cancelled?

Well, it is temporarily.

“What I said was if we can we would drop the project or we would defer it or we would find some other way of doing it without costing so much money,” – said Tun Dr M.

Project status at this very moment: Still suspended. Must check whether to give it to other people who are more cost-effective and got those who offer RM 10billion (Najib tho questioned if this is realistic)… 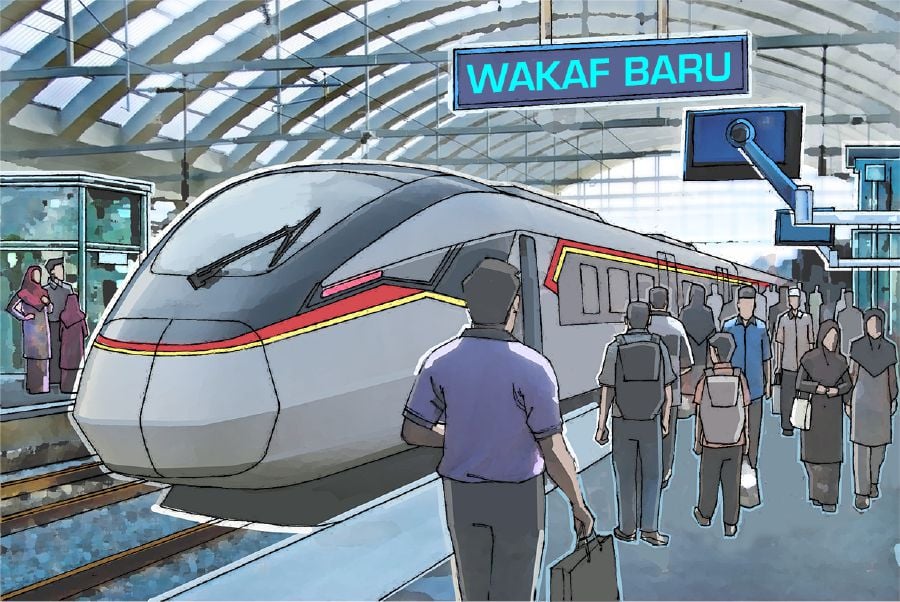 This artist impression would be a reality if they can find a way to cut cost. Image from the NST.

Cost cutting would be possible, according to the industry players quoted by the NST. One of them, who was involved in both foreign and local railway projects, believed that Malaysians are capable enough to undertake the project. The expertise would come from construction companies, manufacturing companies with railway expertise, and government agencies, like the Malaysian Industry-Government Group for High Technology.

Another one said that the best way to cut cost is to reduce its infrastructure work and rail alignment, which could save up to 1/3 of the project cost, with fewer stations along the route. Nevertheless, the ECRL Project is still suspended from work while being reviewed. Now, what do you think? Shall the govt keep ECRL and find ways to cut costs or ditch the project and compensate China?