Just as everyone started their week on Monday (17 Dec), Nurul Izzah announced her resignation in her blog post. Turns out she resigned as the PKR veep and from her other posts (including Penang PKR Chair, member of the National Accounts Committee and Chairman of the Special Select Committee on Considering the Bill).

“I hereby resign as the Vice President of the People’s Justice Party, and surrender my appointment as Penang KEADILAN Chair. The top leadership has been informed by this decision.”- Nurul Izzah said.

But she also said that she’ll still serve as the Permatang Pauh MP until her term ends, and remain as an ahli biasa of PKR. But just not at the federal level lah. She wasn’t very clear about why she resigned but what she said may have given some clues.

“In this field, there are some principles and ideas of struggle that I hold firmly to this day and I always believe that life should be continued with our faith and idealism. On that basis, these principles have become the cornerstone of the announcement today.” – she said.

Well, it’s no surprise that people are speculating on her decision. Like this one: Another source of speculation could be the nepotism accusations, which according to party sources, made her consider not running in the PKR elections. Whatever her reason may be, her decision, which is supported by some politicians, was not made overnight. So there have probably been some things that Nurul Izzah disagreed with since Pakatan came to power.

Here are 5 of these things:

When a Twitter user Arif Kamarudzaman questioned the logic behind the govt’s plan for a third national car project, she replied that the govt would consider public concerns about it.

Am in full agreement with you and am sure our concerns will be duly noted by the powers that be https://t.co/FednSdwbAF

She also retweeted another user TK Thiagarajah’s tweet saying, “Let’s emphasise world class public transport! We really do not need a Proton 2!!!”. In a press statement in early August this year, she said that Putrajaya needed to rethink the third national car proposal before making any major decision.

“The Malaysian government must go back to the drawing board and analyse the national car idea properly. We need to place the needs of the public first before focusing on any vision…” – she said.

She also pointed out that China’s Geely’s 49% ownership in Proton showed that Malaysia’s first car maker was seen as a valuable asset by foreign companies for their entry into the Southeast Asian automotive market. According to her, despite the Chinese ownership, Proton’s presence here already benefits the local workers and car parts suppliers, which she also said is an important part of the national automotive policy. And if you’re wondering what’s Perodua’s position in the whole national car debate (like we did when we wrote an article about it previously), you’re not alone. Even she raised the question of Perodua too and suggested that local employees of Proton and Perodua come together and form a local automotive union.

“Sales report show that Perodua has exceeded 40 per cent of the market share on a monthly basis. What is the impact of Perodua’s success on human capital development and Malaysian intellectual properties involved with the company?”- Nurul Izzah.

Shortly after GE14, the 1MDB raids began. Najib’s haters were probably rejoicing about the raids on his house.. But not Nurul Izzah. Because she knows what it’s like to have her house raided at bedtime, she expressed her dismay in her tweet and reminded the police involved that the principles of justice and wisdom should always apply.

As former victims of early dawn police raids, I must stress my disagreement in ransacking any home at such an ungodly hour. Charge, investigate, prudently. Prinsip keadilan & berhikmah sentiasa terpakai @PDRMsia https://t.co/vnl17mmwqm

Supporting her views was Khalid Samad of Amanah who said that there’s a need to investigate but not to the extent of harassing and humiliating Najib and the fam.

In late August this year, Nurul Izzah criticised the appointment of ex-IGP Rahim Noor as a mediator of peace talks between Bangkok and Muslim rebels in southern Thailand. He was replacing Ahmad Zamzamin Hashim, who was appointed by the previous BN govt to do so.

Rahim, who was the IGP from 1994 to 1999, played a huge role in the signing of the Hat Yai 1989 Peace Agreement between the Communist Party of Malaya and our govt to end the Communist insurgency, when he was the Special Branch officer. That seems to be the reason why he was chosen.

But why didn’t Nurul Izzah agree with his appointment? Because of an assault he did in 1998 while he was the IGP: The innocent man she was referring to was none other than her dad Anwar, who was arrested under the Internal Security Act (ISA) and assaulted by Rahim while in custody. Shortly after Anwar’s arrest, Anwar appeared in court with a black eye.

During his trial, Rahim told the court that Anwar provoked him but that backfired, so Rahim ended up being fined RM 2,000 and sentenced to 2 months in jail. Rahim later said sorry to Anwar and the fam for beating him up.

4. PKR should be working together instead of fighting with each other – Oct 2018

Lately, she’s probably been disillusioned with what her party has come to, especially during the PKR elections when the ‘missing’ votes issue arose.

On the last day of PKR Congress, a tearful Nurul Izzah told reporters that the party should be focused on fulfilling manifesto promises, instead of allowing the flawed PKR voting process to spoil the dynamics among the party members… Particularly Azmin Ali and Rafizi Ramli when they battled in the PKR elections for the deputy president post. Do Azmin and Rafizi look alike? Or is this writer high? Image from Suara Pakatan daily?

She added that people are counting on the Pakatan-ruled govt to fulfill the promises, so she tried her best to be the party’s “voice of conscience” to remind everyone of the key concerns. She also said that there’s a need for a new and improved approach to governing if Pakatan wants to stay in power.

“The people are still waiting for the power transition from the old Malaysia to the new Malaysia. If we failed to ensure smooth transition, we will face judgement from the people in GE15. There is no guarantee that we will remain in power. We must materialise everything that we have planned.” – she warned.

As if the problems in PKR wasn’t enough, the thought of having former UMNO members in PH didn’t sit well with Nurul Izzah. Her resignation announcement came a day after she responded negatively to that idea.

In case you missed out, UMNO has witnessed resignations of MPs, senators and assemblymen last week. Even Zahid Hamidi stepped down as president. So PPBM has been opening its arms wide to allow UMNO defectors to join. For Nurul Izzah, the party-hopping would be like betraying the voters and members who remain loyal to PH.

“Our party was attacked before by defections. Wouldn’t want that kind of pain and antics upon anyone else. There is no meaning to democracy if Malaysia is governed by elite-based politicking.” – she tweeted.

Maria Chin also shared the same sentiment regarding this issue through her tweet, pointing out that Malaysians voted for a change in govt to end 61 years of corruption and abuse of power.

“We cannot accept UMNO leaders who had supported, assisted and be a part of corruption for 61 years. #BukanMalaysiaBaru.” – Maria Chin said.

On top of that, Nurul Izzah claimed that, if UMNO stopped existing, there won’t be a solid opposition party to stop PAS from gaining strength.

Regardless of her reasons, leaving was probably not easy 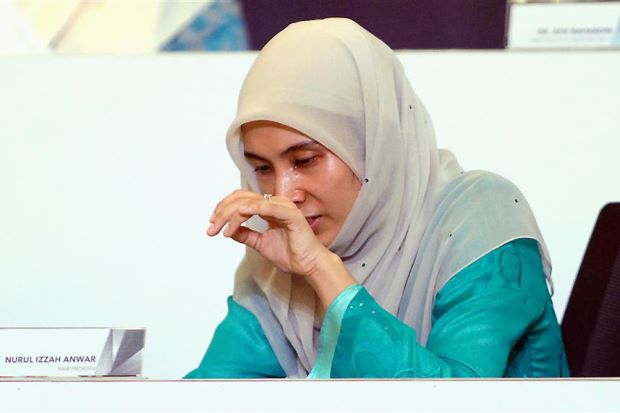 What inspired Nurul Izzah to enter politics was her dad’s arrest in 1998. She was angry at how an innocent man like Anwar could have his rights violated so badly in jail. Wanting to create change for the betterment of others, she decided to dedicate her life to protecting the rakyat through organisations like Suara Rakyat Malaysia (SUARAM) and Muslim Youth Movement of Malaysia (ABIM).

She was later known as a giant slayer when she snatched the Lembah Pantai seat from Shahrizat Jalil in GE12 and from Raja Nong Chik in GE13.

Being in the opposition for over 20 years and then finally becoming a part of the ruling govt, you could imagine the pressure that Nurul Izzah went through to uphold the expectations and responsibilities. And stepping down from her posts less than a year later was not an easy decision to make, especially after a long struggle.

Despite not being a fave for all in Lembah Pantai later on, peeps like Rafizi hailed her for her reformist ideals. Rafizi, who described her as a reformist and a fighter, said that she’s just stepping down from her top posts. He added that, for Nurul Izzah, the reformasi idealism is more important than posts, ranks or power. What she told R.AGE back in July may point to this principle.

“Reforms must be the basis on which we perform our work and fulfill our responsibilities. Politicians can come and go, but long-lasting institutional reforms would be the bulwark (defensive wall) to protect you against transgressions from anybody.” – she said.

She said that reforms are about making the system relevant and continuously improved to the current times, whether it’s the political system, checks and balances, a strong opposition or the legal system. While many are hopping over TO the ruling government (we counted how many in another article), perhaps it’s a sign of Malaysia Baru that some are willing to hop away instead.