Refugees who fail to become refugees will have to leave Malaysia! In Malaysiakini’s report, the United Nations High Commissioner for Refugees (UNHCR) here announced that if they cannot prove they are in danger in their home country, they won’t be granted refugee status.

“All I know is, not everyone is a refugee. Those who are refugees need to be protected and those who are not refugees, can be expected to leave.” – Richard Towle, UNHCR representative in Malaysia, Malaysiakini

What questions do they ask in this refugee ‘test’?

What is a refugee vs migrant? Image from news.asiaone.com

Firstly, let’s look at the definitions. According to international law, the term ‘refugee’ has a specific meaning and shouldn’t be confused with other groups:

Chart created based on The Telegraph’s article. To read more about other people of concern to the UNHCR, click here.

Ok, here onwards, we’ll use the term ‘asylum seeker’ to refer to people who are still waiting to be granted refugee status, and ‘refugee’ for those whose status has already been granted.

*IMPORTANT NOTE: Migrants and refugees/asylum seekers MUST be differentiated because migrants come to Malaysia to WORK, therefore they must have proper documentation to masuk. Refugees and asylum seekers technically escape to come here without proper documentation, so they are considered illegal until they can get UNHCR papers. Their safety depends on being recognized by UNHCR! If only there was a way to tell if someone was genuine by using some kind of advanced litmus paper, that would be a lot easier on poor asylum seekers who’ve been through so much. Obviously it doesn’t exist, so UNHCR has to do this the hard way, which is to manually assess them one by one, through what they describe as a ‘rigorous interview process’. Let’s start from the top and go through the process in chronological order…

1. Registration is the first step to seek international protection with UNHCR. Asylum seekers need to present the necessary passport, ID, birth cert, etc. (if they have), plus, a written statement (in their language of choice) of HOW and WHY they left their country. [Registration form here]

2. Each person registered will be given a file number. They will also be issued an Asylum-Seeker certificate (expires on the day of their next interview). And they’ll be given an appointment slip for the interview.

3. Now they’ll have to go through that ‘rigorous’ Refugee Status Determination (RSD) interview. THIS is the test that determines their fate…

Being scheduled for an RSD interview could take up to one year though. Anyway we’re super curious to know what they ask asylum seekers! WHEWW, thankfully UNHCR made the questions publicly available on this PDF. We screengrabbed the first page for you guys: Asylum seekers can request to be interviewed in a language they’re comfortable with and they can ask to have a lawyer present. After reading everything, we have to admit some questions (from pages 45-50) might seem quite grueling (especially the ones asking if they’ve ever been arrested and their treatment during interrogation). Interviewers are even trained on how to be sensitive, how to handle children, body posture and eye contact, etc.

Also, they interview everybody INDIVIDUALLY – meaning those who came as families won’t be interviewed together, instead they’ll be spoken to one by one, including children. After the RSD interview process, it takes approximately one to six months to reach a decision. If they fail the first time, they can APPEAL. But if they pass, all then YAYYYY!!!!

Ehh, actually how to pass this test? 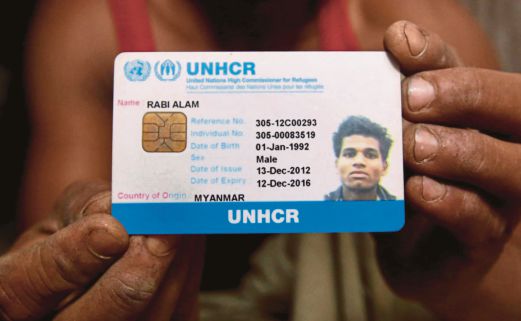 Errr, well there’s no guaranteed formula to pass the test, but according to UNHCR, it would really help a person’s case if they tell the TRUTH and COOPERATE with the interviewing officer! Do not mislead UNHCR about a person’s identity or case facts because it’s fraud. And DO NOT make verbal or physical threats to their staff or they will report it to the police.

NAH, BACA:
This Malaysian company made a wireless charger... except you charge using WiFi

On top of that, the asylum seeker is expected to respect the laws, customs and traditions of the host country, just like any other foreigner.

Additionally, Asylum Access Malaysia (AAM), an NGO, helps asylum seekers prepare for their RSD interview. Their Know-Your-Options workshops provide legal and practical information to help refugees navigate the RSD process, and help them acclimatize to life this country. There are many other NGOs that do refugee work, list here.

Even if refugees pass this test, are they truly SAFE in Malaysia? 68 Syrians arrive in Malaysia to take refuge. Image from The Star

Remember when Najib said we would take in 3,000 Syrian refugees? Well, when 68 of them arrived in Malaysia by plane, they disembarked to applause by Deputy PM Zahid Hamidi, politicians, and NGOs. Adults would be allowed to work, children allowed to go to school, and they would be housed at a condo in Setia Alam. Private companies have even sponsored them during their stay here.

Cheh wahh, not bad!! BUTTT then… what about the Rohingyas? Image from The New York Times

Human rights groups asked Putrajaya why only these 3,000 Syrians are being given special treatment, while over 150,000 other refugees and asylum seekers here are not.

“Why not the Iraqis? Why not the Palestinians? Why not the Rohingyas? Why not the tens of thousands of refugees who have been living in Malaysia in forced displacement, sometimes for decades, struggling to survive without any form of legal protection?” – Sumitra Visvanathan, Executive Director of the Women’s Aid Organisation (WAO), The Malay Mail Online

In fact, even Syrians who came here long before have been living as illegal migrants! Daria, a 32-year-old Syrian asylum seeker, has been in the country for nearly four years with her husband and two boys. But she feels like she’s wasted four years of her life being labelled “illegal” and living in fear of arrest and deportation. Perhaps the issue we need to address is our treatment of all asylum seekers. Why do we treat some better than others? How can we start being fair to them ALL?

We could start by signing a very important document… The original gang that signed the Convention. Image unhcr.org

It’s called the 1951 Refugee Convention and 1967 Protocol (ok actually they’re two documents). Basically, it’s an international law that protects the rights of refugees. Unfortunately, Malaysia has not signed it and expressed no interest in doing so, same as most Southeast Asian countries (except Cambodia and the Philippines). BUT if Malaysia were to sign it, we’d have to ikut the rules and start changing things for the better…

For instance, giving refugees LEGAL status so that they don’t have to hide from the police in fear of being arrested, exploited, or deported. They should also be allowed to work, get formal education, access healthcare, and equal protection of the law, like any human being. Regardless of whether they are Syrians, Iraqis, Palestinians, Rohingya, or whatever background.

As UK parliamentarian Tony Benn once said – the way a government treats a refugee is very instructive because it shows you how they would treat the rest of us if they thought they could get away with it.

Currently refugees do at least get a 50% discount at public hospitals. And the government recently began looking at a plan to allow refugees to make an honest living. They’re looking at five job sectors, deemed as appropriate, safe and easily monitored by the authorities, such as the hotel industry. Let’s face it, without allowing them these basic needs, people might resort to crime to survive, or begging on the streets.

“You know those of us who leave our homes in the morning and expect to find them there when we go back– it’s hard for us to understand what the experience of a refugee might be like.” – Naomi Shihab Nye, poet, songwriter, and novelist, pbs.org