Fresh from his trip to New York for the 70th UN General Assembly, Najib received a hero’s welcome home. Which is enough to make anyone feel welcome. But y’know who else is gonna feel welcome in Malaysia soon? SYRIAN REFUGEES. Announcing it at the UN, Najib has decided that Malaysia will open its doors to 3,000 Syrian refugees over the next 3 years.

Not only are we letting them stay over, the Government is gonna give them IDs (called the iKad), shelter, jobs and education. Walao, even some of Malaysia’s own citizens kenot get.

Chup, why are the Syrians fleeing their country? Very briefly, it started in 2011 when uprisings in nearby countries Tunisia, Egypt and Libya inspired the Syrians to peacefully demonstrate against their President Bashar al-Assad‘s regime. The Government responded with torturing, killing and shooting at protesters. Soon, it turned into a civil war.

But why are we suddenly accepting 3,000 refugees from Syria…

…when we’ve turned away 6,000 Rohingyas who came by boat in May this year, and goodness knows how many thousands more over the years?

We couldn’t find how many refugees have been rejected, but we did find the number of refugees residing here from the United Nations High Commissioner for Refugees (UNHCR). Quite a lot, 270,621 people. 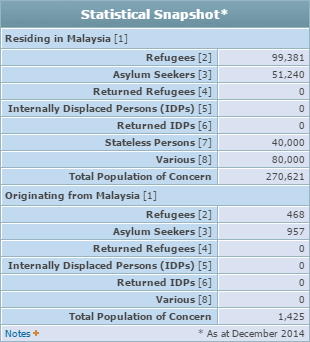 Out of all these refugees, it looks like the Syrians are being given the best privileges so far. Like we mentioned, the gomen is planning to give them iKads.

“Usually the UNHCR will work with the International Organisation of Migrants (IOM) to issue cards for the refugees that enter Malaysia. This time, we will issue iKad for the refugees.” – Deputy Prime Minister Zahid Hamidi, The Star

These cards will have security elements for the Immigration Department to check. And it’s super important coz as we said before in a previous article, without proper documents, you could get harassed by Immigration officers and even DEPORTED (which happens to every other stateless person in Malaysia).

The DPM added that Syrians will be given jobs and education for their children. Plus, the Government will choose a location to house them, although the details are not finalised yet. Since they say liddat adi, we’re assuming that Syrians will be given legit houses and not squatter huts like how other migrants in Malaysia live, or worse, live in detention centres. Cheh bestnyer, red carpet treatment ni!

But WHY? Why Syrians? Everyone’s asking too.

From The Malay Mail’s FB

We think he meant “…we do have it for Syrian refugees?” From The Malay Mail’s FB

From The Malay Mail’s FB

Aiyo, why does everyone think Najib has an agenda? Can’t the man be nice to Syrians without getting flak for it?

Or maybe Najib was trying to look good in front of the UN? Najib speaking before the UN. Image from UN.org

Well, he did announce it in front of the entire assembly.

Najib said it was his Muslim duty to take in the Syrians: “If God promptly rebuked the Prophet Muhammad, how much more will we, the community of Muslim world leaders especially, stand to be rebuked by our Creator if we ‘frown and turn our faces away’ from our fellow Muslim poor and marginalised, now fleeing Syria in massive numbers – causing social and economic stresses in Europe?”

But it’s not just people who criticised this, even Islamic group Hizbut Tahrir called it un-Islamic coz it wasn’t done with his heart in the right place. Screenshot from The Malay Mail Online

Of course we should give our ministers a chance to defend their choices too, right? So our DPM has done the explaining.

“This decision is humanitarian-based, and the PM’s recommendation for Malaysia to accept the refugees highlights the grave concern of not only the government, but Malaysians as a whole on the plight of the Syrians.” – DPM Zahid Hamidi, NST If it’s humanitarian based, what about the Rohingyas? They’re Sunni Muslims too, just like the majority of Syrians! This article from The Ant Daily suggests that maybe it was the Syrians’ GOOD LOOKS that got them in. Don’t get us wrong, Malaysia HAS taken in Rohingya refugees before and after the international outcry on the boat people, Malaysia relented in letting 7,000 of them in, only for 1 year. In fact, there are 143,050 registered refugees from Myanmar, making up 90% of the refugee demographic, with 48,800 of them Rohingyas. Next by numbers come Sri Lankans, Pakistanis, Somalis, Syrians (yep, we have Syrians before Najib’s offer), Iraqis, Iranians and Palestinians.

NAH, BACA:
What does Malaysia do to pregnant foreign workers?

But wait, is the Government forgetting something? Inviting the Syrians in puts the spotlight on our faulty refugee ‘policy’.

It’s a hard life being a refugee

Sorry to burst the bubble, but despite the outstanding number (270,621) of refugees here, Malaysia is known as one of the WORST violators of refugee rights. It’s probably not news to you. You might have heard stories of how they’ve had to run around to escape immigration raids, and stories people being thrown into detention centres not fit for human living. This reputation of ours is known internationally too…

In the US World Refugee Survey 2009 report card for Malaysia, we got like the worst grades. We got ‘F’ in 3 areas and a ‘D’. Here’s a PDF of the report card. Refoulement is forcibly expelling refugees. We got ‘F’

So if the Syrians come here, who’s to say they won’t face the same thing? Tenaganita the women, migrant and refugee rights NGO raised this concern even though they’re glad Malaysia put out the offer:

“These refugees in Malaysia have no protection, they do not have the right to work, the children have no right to education, no right to healthcare, as such they fall prey to human traffickers, they become victims of modern day slavery.

It is so crucial to look into these issues before more refugees are brought into Malaysia just to show concern, or to perform public relations exercises to look good at the international arena.” – Tenaganita statement on The Malaysian Insider

We don’t want them to jump from the frying pan into the fire…escape one persecution, only to face another! Otherwise their lives are a practical imprisonment. Image from emol.com

And we don’t mean a nice rojak! Currently, we have at best an ad hoc policy, rather than an officially drawn up Government plan. Malaysia’s always just thrown together some random guidelines to best fit whatever situation at that moment. It’s very volatile, like how we let Bosnian refugees study here vs locking up Myanmar children in detention centres. Or accepting 3,000 Syrian refugees vs chasing away Rohingyas. You’re hot then you’re cold, you’re then you’re no…

Also, it’s NOT the state that looks after refugees (even though they are the ones who have the resources), but rather the UNHCR, NGOs and religious organisations.

“Such important policy decisions should not be decided on a whim, on an ad hoc basis without taking into account other refugees who are already in Malaysia, some for generations.

Malaysia should instead ratify the refugee convention and implement rational and long-term policies on managing and protecting asylum seekers and refugees.” Eric Paulsen, Lawyers for Liberty Executive Director, The Heat Online

What convention thingy does he mean? It’s the 1951 Refugee Convention and 1967 Protocol (FYI, this is a UN agreement that defines who is a refugee, their rights, and the responsibilities of countries that take them in. PS: war criminals cannot be refugees). Malaysia’s not a signatory to it and has refused to sign numerous times. But they look like they’re having so much fun! Why don’t we join in? Image from dwkcommentaries.wordpress.com

So we may not be a signatory, so what? Richard Towle the UNHCR representative for Malaysia said that doesn’t mean we have to lose our humanity.

“There are ways in which all people should be treated – fairly and decently – and we think it’s not necessary in the interests of law enforcement to keep women and children and vulnerable people in detention.” – Richard on Al Jazeera

How do other countries handle refugees? The US has laws that protect refugees. European countries now are also extending warm welcome to Syrian refugees, especially Germany and Sweden. On the other hand, our neighbour Singapore is not so welcoming. To be fair it’s not like they have the space.

To change law, you also need to change mentality first right? When some parties even call our own Malaysian-born citizens, pendatang…what more those from other countries? But we cannot bring ourselves to imagine if one day, all of us Malaysians also have to live like that… to have to run away from oppression in our own country.

“I think if you asked a refugee that question, the resounding answer would be the lack of a future. They have no hope. They can’t go home. They’re unable to move anywhere else. Their lives are totally on hold.” – Richard

You cannot force people to be kind…but kindness can be a force to change refugee rights for the better.

Interestingly, the main reason Syrians are fleeing their country is because of a leader that won’t step down.