[This article was originally written in BM. Click here to read it on Soscili]

Every once in a while, we’d hear news of some politician or celebrity taking on a second wife, such as recently-released from prison (and ex-Selangor Menteri Besar) Khir Toyo’s recent marriage to a government worker in Putrajaya despite being already married; or local actor Adi Putra remarrying without his wife’s knowledge. 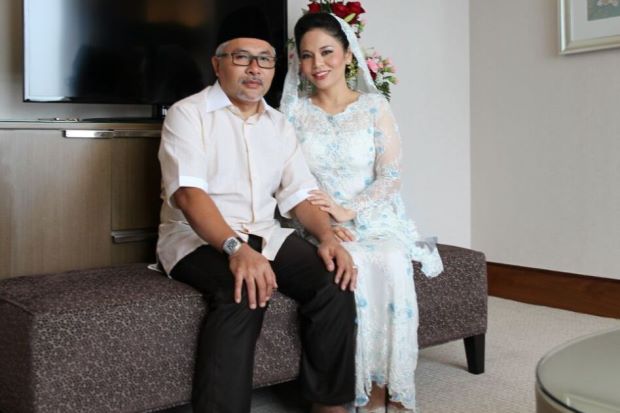 This practice of taking on another wife while still married to the first one is called polygamy, not to be confused with origami – which is the art of folding colored papers. Incidentally, polygamy is illegal for non-Muslims according to Federal law but is allowed for Muslim men under Sharia Law. We’ll go into some of the specifics later in this article. We couldn’t find an English explanation that’s as funny.

While it may seem that getting another waifu for laifu is something left for the rich and famous, we were pretty surprised to find that this perception is dead wrong because…

1. Most men with more than one wife earn less than RM4k a month!

Some of ugaiz living on your own will know that making ends meet for yourself is hard enough, much less having two wives and who knows how many more children to feed.

But according to stats released by the Ministry of Women, Family, and Community Development’s Population Survey in 2004, the highest percentage of men in polygamous marriages are actually only earning between RM3,000 – 4,000 a month! Considering that the typical Malaysian household spends RM3,600 on necessities alone (2014 stats), the remainder may be barely enough to support a cat much less a wife.

Screencapped from the Ministry’s Population Survey, 2004.

Even more shockingly, the highest percentage of men with two wives have no job at all.

But in case you’re the discerning reader wondering why we’re using stats from two different time periods, it’s because the most recent Population Survey (2014) doesn’t have anything on polygamy, perhaps because they replaced it with snazzy page-flipping animations.  🙄

However, a slightly more recent in-depth survey by local Islamic NGO Sisters in Islam (SIS) in 2012 seems to come to a similar conclusion, with 70% of the 63 people they interviewed earning less than RM3,000 a month, many of them being self-employed or blue collar workers.

So how do these families make ends meet? Well…

2. Many new wives end up supporting the entire family!

Whether from reading news involving VIPs or from watching TV shows, we might think that everyday life for the typical second wife would be something like this:

But in reality though, it’s something a little more like this:

The SIS survey mentioned earlier also included the wives, and they found that life for second wives are like a bed of roses…. except the florist forgot to remove the thorns:

Based on the first point, it probably won’t surprise you that 63% of husbands don’t actually have the financial capabilities to support their existing families, much less a another wife. What happens is that many husbands reduce the allowance given to the first wives, leading many to also look for additional jobs.

But now, let’s go on to some fun stuff, like which state do you think has the most polygamous marriages? Answer after the header.

3. And the state with the most polygamous marriages is… Artwork by Allen Tan of Truefaces. Thanks correcting us, Joey!

Based on the stats provided by JAKIM to the National Statistics Department, Kelantan chalked up a kelan-ton of polygamous marriages in 2002, with a whopping 1,331 cases. Yes, you might say that these are old numbers, and you might also notice that the state did not provide numbers for the following two years. Our SOSCILI friends contacted JAKIM for more info, but didn’t receive a response. #WeTried While we don’t know what the current numbers are, we’re pretty confident in saying that it should still be pretty high up there because between 1990 and 2004, there were 5,274 cases in Kelantan – almost double the numbers of the second-highest state, Terengganu (2,645 cases).

And there actually two really solid reasons as to why Kelantan totally rules at putting the ring on it when they like it. For one, our Shariah courts are state-independent, meaning that each state may have slightly different rules. When it comes to Islamic marriage law, Kelantan is noted to be the most relaxed when it comes to polygamy – all the husband needs to do is to get permission from the Shariah court, in contrast to some states that have requirements such as proving he’s able to financially and emotionally support both families..

NAH, BACA:
Malaysia just made its first gene-modified rice. Why are farmers against it? The second is the same reason why Kelantan also has the highest number of AIDS cases – Thailand. To avoid getting permission from the state Shariah court (or their wives), husbands can just hop across the border to be married by the Thai religious authorities. In fact, SIS notes that about 40% of polygamous marriages happen outside Malaysia, with most of them along the Thai border. And when people find out about it back home…

“For Muslim religious authorities – even those in the Syariah court or the religious departments – their conscience as a Muslim comes before the law. So they claim that under Syariah law, a religiously- sanctioned process (is considered) a legal marriage whether or not it was done (in secret) at the Thai border. … they only have to pay a mere RM30 fine for the Syariah court to register that marriage…” – Noraini Othman, SIS founding member, as quoted by FactsAndDetails.

We would also like to add that SIS also mentions that 32% of these marriages that happen outside Malaysia don’t get registered. This doesn’t only mean that the numbers may actually be higher, but also there are wives out there who will have no legal protection or be able to get legal status for their children.

4. Our Islamic Family Laws USED to be the most progressive in the world!

Back in September 2015, CILISOS attended a forum on Islamic Family Law organized by SIS. One thing that stood out was that when our Islamic Family Law was first introduced in 1984, it was noted to have been one of the most progressive Islamic laws in the world in terms of rights and protection for women. However, some changes were made to the law in 1994 and 2005 that kinda reversed that.

For example, one of the original conditions for a husband to take on a second wife is that he has to prove to the court that it was both “justified AND necessary”. However, this was later changed to “justified OR necessary”. We don’t have the space to explain how much difference this one word makes or the other laws that were changed, so you can watch the video from the 4:30 mark below:

But hang on a second, if the original 1984 laws were so progressive, why did it even allow for polygamy? And for that matter, if men can marry up to four wives, why can’t women marry four husbands?Well, we’re glad we asked that question because it leads to the final point of this article… In order to see the logic for this, we have to look back at the Islamic context as well as the social norms of Arab society back in the day. Y’see, in both religious and social context, men are seen as the head of a household; aka the family provider. A woman with two husbands would create a conflict of having two heads in one family, which goes against the concept of family harmony.

There are at least three interpretations on why a man can marry up to four wives, but the general reasoning is that the Quran asks its followers to take care of the orphans living around them. In this sense, marrying a widow would give her and her children the financial and social security that they may otherwise not have. However, the Quran also notes that this should be done only if a man can afford it, and if his wife agrees. If not, he’s asked to stick to one:

But if you fear that you will not be just, then [marry only] one or those your right hand possesses. That is more suitable that you may not incline [to injustice]. – Surah al-Nisa 4:3, translated by Quran.com.

But of course, there are also people have interpreted polygamy as a way to avoid zina or adultery, since this is one of the main reasons given by men in the SIS survey. It’s also notable that among polygamous families, 65% of husbands recommend polygamy while 90% of their children (from both wives) do not.

We’re not in a position to say which interpretation is “right”, but we would just like to end with a verse from the Surah Ar-Ruum:

And of His signs is that He created for you from yourselves mates that you may find tranquility in them; and He placed between you affection and mercy. Indeed in that are signs for a people who give thought. – Surah Ar-Ruum 3:21, translated by Quran.com.