We’re all familiar with public schools, SJK (C) and (T), religious schools and boarding schools. But there’s another type of institution that gives students more than just academic creds…military school.

And they’re sorta rare, there are six military academies in Malaysia, as far as we can find (okla it’s not as rare as this one-and-only school for pregnant teens in Malacca). There’s the National Defence University of Malaysia (NDUM), the Armed Forces Health Training Institute, and Armed Forces Defence College, to name a few. Perhaps the most well known of these is the Royal Military College (RMC).

But really, military school?! Why would parents do that to their kids? Smelly dorms, crawling in mud, screaming drill sergeants…unlessss it’s revenge for all those years of cleaning their poop, mUaHAHAhahAHaahA It is also about getting taunted ‘worm’ and ‘maggot’, and shining boots, and cleaning toilets, and… 😛

Seriously though, military schools are similar to kebangsaan schools, but are well known to be the best of the best in academic excellence. The Royal Military College (RMC) for example, is basically an all-boys government boarding school for 15 to 17-year-olds, but it’s famous nationwide for it’s terrer English Debate team that has won the Prime Minister’s Trophy a record number of times. Students from RMC have done their school proud even globally, like this bright student who won a gold medal at an international science competition last year.

“Academic excellence is one of the priorities and the teachers in the College are handpicked from the best available teachers in the country. These teachers too come from all background and experiences, which lend to the diversity and schools of thought the students will appreciate. Yes, my son is slotted for intake 2022.” – Lim Ee-Van, RMC alumni (known as Old Putera), quoted from his blog Tristupe.com Bet they also feel nervous like other schoolkids on report card day. Img from RMC

Secondly, students receive military training on top of their studies – drills, shooting training, stuff like that. It’s about strict discipline and learning to be independent, something that perhaps not all students might pick up in a regular public school. In RMC, they call the students Present Putera, while alumni are called Old Putera (or OP).. Putera as in ‘prince’. Fancehhh.

“So, parents who are reading this and wonder what’s next for their children’s education, RMC can be a choice (in fact the first choice) to send the boys to. Take them out of their comfort zone and see them grow to be fine young gentlemen. They come back home and will impress you with their ironing, bed-making and perhaps amuse you on how they can cook with a pail and a heater only.” – Ee-Van, quoted from his blog Tristupe.com They have a crazy number of uniforms. Click to view

For some of the kids who enrol in military school, it’s all about following in their father’s footsteps. Some come from a long line of military men, so the army is in their blood. Two such students are Suhanraj Rajasegaran and Chan Jun Kwan, who were RMC top graduates. They went on to do the country proud by graduating from TOP military academies around the world, like the famous West Point in the US.

“My father is a retired army warrant officer. I have always wanted to follow in his footsteps and join the army. But he tells me, ‘Aim higher, aim to be more than just a warrant officer. With discipline, good health and hard work, you can achieve whatever your heart sets out to do’.” – Suhanraj Rajasegaran, RMC and West Point graduates, The Star Proud moment for Suhanraj and Jun Kwan when they received their scholarships. Img from Says.com

Not every parent has the hots for military school though… in the 1970s, Captain Dr. Wong Ang Peng’s mother cried when she heard he joined RMC. For a Chinese family back then, joining the army was considered a step down, not to mention a dishonour because it could spell an unpredictable death.

However, not everyone who graduates from military school ends up with a career in the force. Check out how some of RMC’s alumni turned out… Ling Liong Sik was from there, Raja Nong Chik also, Rashid Hasnon (Deputy Chief Minister of Penang), Syed Saddiq (PPBM’s Youth Chief), Jomo Kwame Sundaram (economist), Mirnawan Nawawi (national hockey player), G. Gnanalingam (Chairman of Westports), Samuel Ong (cardiologist), and even AC Mizal (singer and actor). Watch AC Mizal revisiting his alma mater:

Coping with military school life is hard in the beginning, but that’s why they become united Waking up at 5am is the hardest. Img from RMC

Ok, so military school like fruits and vegetables has loads of benefits, but we imagine it might be difficult to cope in the beginning. Unlike regular boarding schools, they wake up at 5am every day. Most students find this the hardest part of life at RMC! Punctuality and discipline are of the utmost importance, and anyone who slacks off gets punished regardless of race or rank. Memang not a lifestyle is not for couch potatoes.

NAH, BACA:
So.. what kinda future do students from Malaysian islamic religious schools have?

Unity has always been the core principle, said former Commandant Colonel Wan Ghazali Wan Din, of the Malay, Chinese, Indian and East Malaysian students at RMC. In spite of their differences, the kids really enjoy a camaraderie with each other.

“Some say the sense of togetherness is a result of the officers telling us (what to do) every day, but I believe it’s the punishment you go through together, living in the jungle, eating together that makes it natural for you to help your friend in trouble.” – Aqlifputra Iqbalputra, 17, quoted from The Star

Although this time, enrolment of non-Malays a bit low so the Defense Ministry is targeting a 20% intake of non-Malays to bridge the racial gap. While kebangsaan school organises trips to Aquaria or Zoo Negara, RMC kids get to go to… naval bases! Yayy fuuunnnn!

As for the National Defence University of Malaysia (NDUM), it is a military university, where graduates receive a bachelor’s degree and become young officers and serve 10 years in the army, navy or air force. While most uni students tend to take it easy in their first year, NDUM cadets find it hardest to cope during this time as they transition from civilian to military cadet.

And unlike all other universities in Malaysia, NDUM doesn’t refer to students as freshmen/sophomores or junior/senior. Instead, cadets are called by their intake year eg. “2017”, “2018”, “20XX”. But the hardest time at NDUM is each end year-session, where cadets undergo their Single Service Training (LKPT) which is generally regarded as the ‘worst 6 weeks of the year’. PUMP IT WORMSSS! Image from The Star

We cannot avoid the subject of bullying, which is a norm in school or uni life, especially boarding schools. But the culture is seemingly more encouraged in military schools because it can ‘develop a person’s mental fortitude and their personal character’, Malaysian Digest reports.

Last year, an NDUM final year student was tortured to death over a laptop and five students were charged for his murder. Meanwhile, we only found one news report of death by bullying at RMC, which happened in 2010 to a Form 4 student. A second year NDUM student who only wants to be known as Faisal said there were two kinds of people who get the worst of it:

“When it comes to ragging, the PALAPES (Pasukan Pegawai Latihan Simpanan) students and the cadets usually receive the worst treatment, due to their militaristic ideals. The normal students are treated as civilians, so they normally aren’t subjected the usual military ragging. But the cadets and the PALAPES, are subjected to ragging almost everyday.” – Faisal told Malaysian Digest

Captain Lee who graduated from RMC recounts the time he and his whole squad were forced to eat sh*t because someone forgot to clean the toilet!! Despite that horrific “meal”, he still believes it is necessary tradition that cannot be replaced as it builds brotherhood and camaraderie. Military guys think that civilians won’t understand this, as one UiTM Melaka cadet put it:

So, is military school for you or your kid? 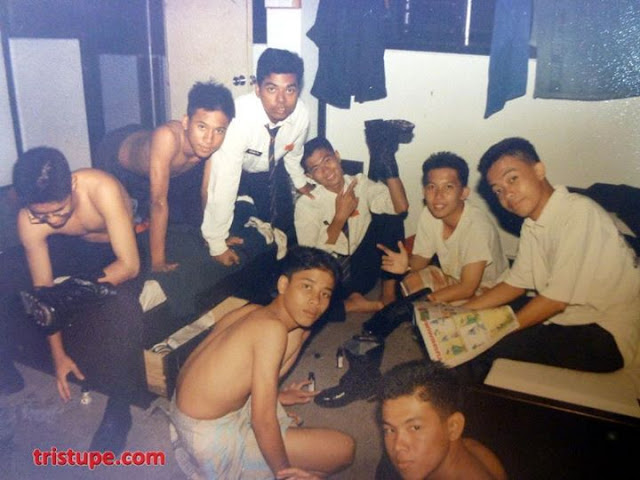 Make those boots shine so hard you can signal aliens from your room! Image from tristupe.com

Joining military school can really teach a person a lot about life. Unity, discipline, independence, courage, waking up at 5am… It would be quite a rite of passage for your boy boy. Lots of benefits to it, just ask the Old Puteras like Ee-Van and Captain Lee, and they speak so fondly of their days at RMC. Or if you’ve always wanted to know what being forced to eat poop feels like, join lor.

But it’s important to note that military school is NOT the solution to dealing with a discipline problem child. Rather, counselling is preferred, though that’s up to the parent.

Being sent away (whether to military school or normal boarding school) can perhaps be overwhelming for some children because it might make them feel unwanted or something. Unless both parent and child are secure in the knowledge that sending them there is not to ‘throw them out’, or the kid himself wants to be there. Maybe just sit them down and assure them it’s not for revenge. 😉