Malaysia was first introduced to the internet in 1995. In the 22 years that followed, we have discovered wifi, 4G, Facebook, Whatsapp and Cilisos.my. We’ve also sadly discovered that the internet is fertile ground for scams to occur, as shown news like the father and daughter who got scammed RM5, 100 on Facebook, or the single mum who thought she was falling in love but actually fell into a scam.

On top of that, there’s also been a sort of crisis going on in the Malaysian cyber space: Fake news. The problem has gotten so bad that the Communications and Multimedia Minister Salleh Said Keruak said on his blog that people need to verify before sharing stuff on social media.

You may be surprised then to hear then that the govt actually have taken action and formed an organisation to educate people most at risk of being victims of cybercrime called Klik dengan Bijak in 2012! We figured some cynical Malaysians might just assume that this site’s some gomen propaganda programme to control how we use the internet, so we thought “Hmm let’s check out this Klik dengan Bijak thingymajig” and found that….

…THE WEBSITE WAS DOWN. It went down before the CNY weekend and only came back up a week into February  🙄 But anyway, we waited and finally got our filthy hands on Klik dengan Bijak. And lo and behold, it’s actually not that bad! We went thru their site and picked some of the most useful tips we found on internet safety (just in case the site goes down again. heh.), starting with…

1. Think of cyberbullies as insecure people

In a survey by Microsoft, we ranked 17 out of 25 as the country with most online bullying. And before you go “Oh, what’s the worst that can happen?”, people have in the past had to take extreme measures, including suicide. And in Malaysia, as many as 40% of students at a school have been cyberbullied, according to child therapist, Priscilla Ho.

KlikDenganBijak’s tips actually make a lot of sense here (barring a fwe grammar mistakes) for people being cyber bullied. Essentially the summarised into “when they go low, you go high!“, it asks victims to actually either ignore them, or tell them they’re the ones who are actually insecure.

2) Don’t engage with trolls. It’s what they want We here at Cilisos need to deal with online trolls all the time in the comment section of our Facebook posts and articles. And what we’ve come to realise is there’s a point at which you recognise that whatever you say won’t make a difference – at that point you stop.

So there’s some really good advice here – in the sense that what trolls want is a reaction. Which is why it’s so hard to win – if you try to win, you’re feeding the troll and thus… you’ve already lost. But actually right… the solution to trolls came about a LONG LONG time ago.

3) Be extra careful with banking data

Okla, so maybe they budget a bit on the actor – but the advice is really sound. When it comes to banking, be very very careful. The video actually highlights 4 solid tips.

Once again, CILISOS team is no stranger to identity thefts. Our own writer Uihua has been on the end of either a really elaborate running joke or someone has been trying to steal his identity – online that is. 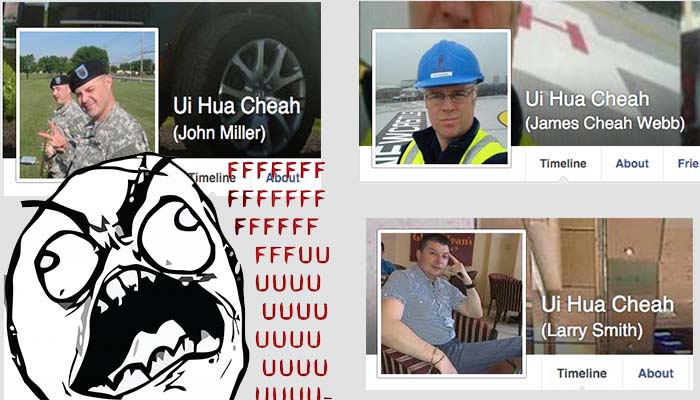 I got 99 problems but a Uihua ain’t one.

But for real tho, identity theft can be a very serious crime. Why do they do this? Well here’s a good example of when our editor received a very suspicious email from his friend.

NAH, BACA:
Wait. Why does Malaysia need fake news laws when we have defamation laws?

KlikDenganBijak also recommends not giving too much away on social networks, and watching your privacy settings carefully. Imagine how much more convincing a scammer could be to your friends and family if they knew your personal details and that you had just been to Japan…

KlikDgnBijak has a section called LOVE THREADS, and the advice is quite uh… short n sweet. It deals with the topic of nudie pics, and the advice is pretty straightforward. We’ve actually covered this in a previous article. The most important thing to realise here is that trust might not even be the issue. Even if you know and trust the person you’re sending it to, do you also trust

“Think about it – what if you fight and break up? That person, no matter how nice he/she is, or what promises they made to you, could, when angry, post your private information, photos or videos online.” – KlikDenganBijak

The thing is, once the picture is taken, it exists and that allows someone to access it. They can screencap it, take a picture of it with their mobile phones or whatever… and once it gets out there, there’s no controlling it anymore.

If you HAVE to do it, then at least dun include your face la k?

5. If something looks weird, Google la before you share it

Eneng Faridah Iskandar, the senior director of Klik dengan Bijak, found during the internet literacy programs that Klik dengan Bijak did, many participants failed to tell the difference between real news and fake news on social media.

“As long as it reads like something from a newspaper, they can’t tell the difference. People are beginning to wise up (to fake news) but it can’t happen without a focused education programme. We have a high user and penetration rate, but we are still not media-literate,”- Eneng Faridah, in an interview with The Star

With Malaysia being the second most dependent country in the Asia Pacific region to rely on social media for news, there is a higher chance of misinformation to spread. Between the MCMC and Klik dengan Bijak, the govt hope that they can counter fake news stories on social media. While the MCMC handles those who have broken laws by sharing misinformation, Klik dengan Bijak hopes to educate people before they share fake news articles.

Be skeptical, don’t share just to get likes, and don’t share offensive things. Not so sure about the last one, but you might also want to add – check the sources of stuff when you share. Here’s a good list for American news, couldn’t find one for English… although we ourselves did a poll a few years ago.

With recent comments by ministers about online media, we were bracing ourselves for the worst – but KlikDenganBijak seems to have done pretty well. With more than 30 Malaysians being victims of cyber crime daily, perhaps we do need them.

This is on top of the work by the website Rojakpot, which has an entire section on debunking hoaxes and fake news stories that have been doing the rounds on social media. Some of the really popular fake stories that they’ve debunked include finding out the truth behind that picture of Barack and Michelle Obama holding up a Bersih t-shirt and the urban myth claiming that pisang goreng vendors are adding plastic into the frying oil to get a crispier banana.

The internet connects you to the world. So there are bound to be both positive and negative effects. If you don’t want it, then just put your modem into the microwave to charge it lo. But at the end of the day, if ugaiz decide you wanna be on the Net – then we all have a responsibility to make the Internet a better, and safer place. That article you share can actually be shared by 100 other people, and then by another 10,000.