GONG XI FA CAI!!!! Chinese New Year is here! And chances are, if you’re interested in reading this article, you probably giggled at the words “hardest thing” so near the word BANANA. You also probably have no idea what GONG XI FA CAI mean. Actually, HAPPY NEW YEAR translates into “Xin Nian Kuai Le“. According to The Star (wah they really have too many staff), GONG XI FA CAI actually means “Congrats on Getting More Wealth!”, which would suck if you wished it to someone who just went bankrupt.

So it’s obvious that these sometimes Chinese-looking people who can’t speak Chinese, go through tough times every CNY. What do we call them?

Why Banana? Cos yellow outside, but white inside ma. Unfortunately, in cities like KL and PJ, is dem common (the whole CILISOS office can barely put together a Chinese sentence). And these things become even more obvious during CNY. So what to do? Embrace the banananess lor, like the son of the God of Prosperity himself, Choy San Zai.

Yep, this is part of Smirnoff Ice‘s new ONGSOME campaign, which has a whole series of HILARIOUS videos with Choy San Zai and family. It’s meant to talk about how while CNY is about family, the really fun bits are with your OTHER FAMILY – otherwise known as your friends.

Who are also probably BANANAs.

So here’s how you win Smirnoff Ice to enjoy with your OTHER family! 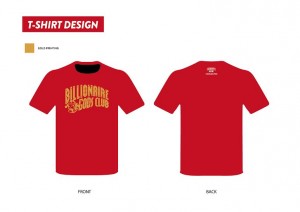 When we say limited, we MEAN limited. There’s only M size for these t-shirts. M… for Monehhhh

Just tell us WHY IT SUCKS BEING A BANANA DURING CNY?

NAH, BACA:
Create the most 'ONG' number plate and drive a VW for a week!

Anyways, DUH. The awesome peeps at Smirnoff Ice have agreed to sponsor CILISOS’ latest contest. Tell us what the WORST things are about being a BANANA during CNY.

Not only do you get to win a CRATE OF Smirnoff Ice (for first three winners, any other winning entries get a 4-pint pack of Smirnoff Ice), AND a LIMITED EDITION BILLIONAIRE GODS CLUB T-shirt (only available in M)….

But Choy San Zai will be reading your BANANA COMPLAINS in a special edition video to be released closer to CNY! OMG

Do you really need any more incentive? FAITIT LA

Oh sorry, we mean FASTER LA BANANA! Oh and as per usual, you need to be 18 and above and non-Muslim to participate! Contest closes Feb 2nd 2015!