Sometimes, when it comes to sharing traditions, Asian families have it WEIRD. Like getting a little boy to open the wedding car door, or wearing red undies on special days? Most of us never really questioned why we did them, until we invite a friend over for a birthday party and they look at us whacking a red egg on our foreheads and go like… So together with our friends at Digi, who has just launched their Family Plan, we wanted to find out from our readers just what were some weird family traditions that they share with each other. But before that…

Speaking of sharing, there’s the Digi Family Plan that makes sharing so much better.

Same same for all!

If you didn’t know, there are plenty of family plans out there… but most of them give the main line the most benefits. With Digi’s plan, everyone gets to enjoy the same great benefits. Best part is, they don’t cap their speeds even while offering unlimited quota.

Another great thing is that, now, everyone gets to also upgrade their phones! Y’know those plans where you could “rent to own” phones? Like let’s say you wanna get one of the new smartphones, all you need is to pay a certain amount every month for 2 years, and at the end you’ll get the phone? Previously, this was a benefit only the main line would be entitled to… but with the new plan, everyone gets to do the same!

So if you’ve seriously had it with your mom’s crappy 6-year-old phone that crashes the second WhatsApp opens, this is your chance to help her get a better phone without it being too burdensome. To learn more about Digi’s Family Plan, click here.

OK…. let’s get down to the main reason why you’re here – to read about those weird traditions!

1. Happy Birthday! Faster whack a red egg on your forehead! “According to Chinese beliefs, if it’s your birthday you need to be knocked on your head with hard boiled red color egg…” – Sandy Gan

Honestly, we would probably have filed this under Gibberish, had we not seen it with our own eyes, at one of our editor’s Penang friends’ birthdays. They take those red boiled eggs, and proceed to WHACK it on their forehead hard enough to actually break it. Then it’s up to you whether you want to eat it or not.

BUT WHY?! Well… the explanation according to our friend (Thanks William and William’s mom!) is actually pretty deep. The Egg signifies reproduction and growth, so poor Hokkien kids gotta do this even when they’re young… which usually results in alot of crying kids.

However, as you get older, it gets less painful – and this signifies your ability to deal better with pain as you mature. Wah. #sodeep While most of us have heard of this one before, the proof is in the pooping. Our reader, Deng, reported that 2011 was a horrible year for her, with a car accident, failing her exams, having to repeat an entire semester and thus she couldn’t even secure a job. Then one day, she was taking a picture with two friends at Central Market and then…

“The bird just shat on me while the picture was being taken! A month after that I got a job interview at a foreign airline based in KLIA, and they awarded me the job! Including one day off every week to go back to university to study!! What gives??” – Deng

BUT WHY?! So this one is apparently because of two things – direction and Karma. The belief is that it is a blessing from the heavens (sky), and that the grossness of being pooped on will result in some sorta equal blessing. In fact, the more the poop, the bigger the blessing! 3. Breaking off a cicak’s second tail 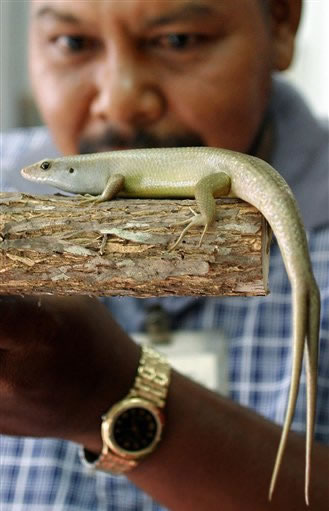 “BRO… why you looking at me like that bro?” – Image via neatorama.com

“If you see a double-tailed ‘cicak’, catch it, snap its tail (de fella won’t die coz de tail will grow back so don’t worry). Then wrap de tail in red clothes, go to Genting (or any casino for that matter), you’ll surely win.” – Mixon

BUT WHY!? Wahlau. This one we’ve definitely NEVER heard of. In fact, while we can find evidence of lizards being considered somewhat lucky animals (especially in Thailand), we can’t find anything about Lizard’s tails (poor Rango!). The only thing we can guess is that because the tails of lizards grow back, it’s considered a regeneration of your luck maybe?

“Eating at different spots (in one meal sitting) will make you marry more than once.” – Irfarina

BUT WHY!? Wah. We’re not sure where this one’s from. We’ve heard of the not-finishing-your-rice-resulting-in-pimply-spouse one, but this is pretty bizarre. Plus, Irfarina has reported that efficacy is questionable.

“Well..I’ve done that a couple of times but still a lone ranger. But hey, if God doesn’t want me to die lonely, I ain’t complaining!“. Aiyo. Well, at least you’ve got some free pizza for those lonely nights. “Well, my Ah Mah threw the bucketful of water but didn’t see me in front so I kena the water lar. I guess bad luck qua coz I got basah from dirty water. Oh n also that day I lost my 50 sen allowance that I was going to use in the tikam store (about 12 years ago mah so 50 sen quite big one).

Ah maaaah why you do this to meeee!?” – Wee Jee Hui

Aiyo poor thing Jee Hui! Anyways… the meaning of this one is pretty obvious to anyone who knows any Chinese dialect.

BUT WHY!? “Buang Suey“(Sueh?) lorrr, which is a common Malaysian term for throwing away bad luck. There are many methods of doing this  including going for a pee halfway while on a gambling losing streak, taking a shower or in this case, for literal-Ah-Mah, buanging the water (“Suey” in Chinese”) at your poor grandson. “If a person is wearing his or her tshirt/top inside out, ask the person to buy number. Sure can strike. However, that person should not know he or she is wearing it the wrong way, as the luck only works in that manner.” – Maheswaran

Hmmm. That means you can’t force this lor.

BUT WHY!? There’s a bit of a surprise on this one… but first… a poll!

Well, it turns out the answer might be the OPs yo!

“William of Normandy inadvertently put on his shirt of mail back to front just before the Battle of Hastings; when his courtiers pointed out his mistake and said it was a bad omen, quick-thinking William assured them it was not and was in fact a sign that he was about to be changed from a duke into a king.” – The Psychic Well, which claims it came from French-Canadian roots.

As to why? Well some people in the office talked about “reversal of fortunes”, but aside from that, we couldn’t find anything. If you do, let us know in the comments below? 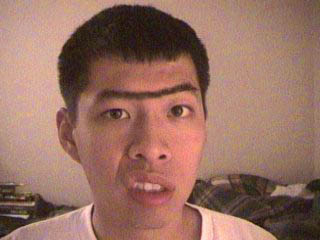 “If your eyebrows are thick, it means that you’re going to be very lucky and prosperous. Well, my eyebrows are about as thick as the North-South Highway. Still waiting for that moolah to come…any day now…any day…I’m ready for it….I’m pretty sure it’s coming soon…” – Victor

BUT WHY!? So apparently Chinese have an aspect of face-reading in Feng Shui. In fact, it’s even been covered by the South China Morning Post, which makes it mega-legit yo! Unfortunately, it’s alot more complicated than that, Victor :(… Here’s what it says.

8. People with tiny black dots on their tongue bring you…. luck? “My grandma use to say that those people with tiny black dots on their tongue, when they bless you with a happy heart, that it will come true. And also if they super-duper angry and they curse you, that one will also come true!  I remember once, I helped an elderly lady financially. She blessed me telling that my good deed will be returned. She also told me that whatever she tells will come true since she has the tiny black dots on her tongue.

Exactly after one week, while walking back from the LRT station I found RM150 on the road. After asking a few people around whether it’s theirs, one of the uncle told me, “girl, you should keep it, its your lucky day”” – Rebecca Ann Visvanathan

BUT WHY!? OK this one confirm no one in our office has ever heard of. In fact, when we Googled it… all we found were medical conditions. Er, Rebecca, you might wanna ask your friends to see someone about that. One reader, Kylie, says her mum insists that Ba-zi (Chinese astrology) has blessed her with a unique kind of luck – but only for others to benefit, never for herself.

“She claimed that she’s a “bank negara” according to “Ba Zi”. She can never win any money. But people have to use her to win money.

One day, she decided to hide in the car boot with our entire family inside the car. She insisted we drive back home with her in the boot. Guess what….the car plate number won jackpot! Unfortunately, none of us trust her enough to buy the number :(” – Kylie

BUT WHY!? Aiyo. This one family belief. Sometimes there is no why. PS if you wanna see your own BA ZI, and got your birth cert handy (it needs time of birth), you can use this BA ZI Calculator.

[This article was first published on Cilisos.my for Chinese New Year 2016]