Ask just about anyone what their impression of Malaysia is, and they’ll probably tell you that it’s a country that’s rich in cultures from different races. For example, the Malays have such a thing called ‘angkat rumah‘ where they literally move their house from one place to another and the Indians have this thing called Thaipusam.

And what does the Chinese have? Well, they have things like the Nine Emperor Gods Festival and maybe even created the one and only Yee Sang. However, there’s something else that a lot of the Chinese in Malaysia didn’t know about and it’s the Wangkang Festival.

Yes, yes, we know – the Chinese community tends to have a lot of festivals, like the Mooncake Festival and Winter Solstice. But Wangkang is a little unique because it’s isolated in Melaka and mainly held by one temple, Yong Chuan Tian Temple. And not just that, it may have predicted Covid-19 long before we even faced it. Wtfqwertyptptn? How?

Well, before all that, let us first understand what Wangkang is. As you know, the Chinese has a tradition of dedicating a specific month in a Lunar year to treat the ‘spirits’ who have been released into the living world, and it’s called the Hungry Ghost Festival. Wangkang Festival, on the other hand, takes it a step further, where the Chinese in Melaka will send the spirits away on a barge – basically a giant ship.

“The whole idea of Wangkang is to clear our streets and country from negativity.” – Wangkang organizing chairman Ronald Gan, in an interview with Cilisos

It works like this. On a specific day chosen by the deities, Yong Chuan Tian Temple will organize a procession involving a barge that they’ve built themselves, like in the image above, and start going around the streets of Melaka. The purpose is to collect spirits that are still ‘wandering’ around Melaka. And then the barge will be delivered to a seaside, where they will then burn the barge away, symbolizing the burning away of negativity and the coming of peace and prosperity. But they don’t just follow any deity in Chinese culture. In fact, those who do the Wangkang Festival worship five Ong Yahs – basically their deities – and they are: The five Ong Yahs. Image from My Melaka Facebook

According to a source from Melaka In Fact, a group dedicated to the history of Melaka, Wangkang can be traced back to the Hokkien migrants who came over to Melaka during the colonial times. And as they came over, they brought with them their deities and traditions, including the Wangkang Festival and the five Ong Yahs that are pretty much in charge of it.

“As customary, the descendants of these migrants followed their footsteps in worshipping these five Ong Yahs.” – Melaka In Fact, in an interview with Cilisos

However, even though the Hokkien migrants can be found in colonial Malaya as far back as the 1600s, the first recorded Wangkang Festival in Malaysia was in 1845, and it took place every five years until 1880. But then it stopped for eleven years, until the Chinese in Melaka held it in again in 1891. And then it stopped again, and then it happened again in 1933, 2001, 2012, and 2017. The point is…

Unlike other Chinese festivals, Wangkang Festival doesn’t happen every year Wangkang Festival back in the day. Image as provided from Gan

If you hadn’t noticed in the dates written above, there’s practically no regularity to the ocurrence of Wangkang Festival. This is because, according to Gan, they can only hold a Wangkang Festival when an Ong Yah tells them to.

But wait, how does that work? Well, basically, every year or so, Yong Chuan Tian Temple will ask the Ong Yahs for their instructions and on whether a Wangkang should be held – and they do it using a chair. Gan told us there’s a chair that the Ong Yah will sit on. And somehow, this chair will move by itself to guide the carrier’s hand to write on a piece of paper.

“It’s important to remember that they are not possessed. They’re fully aware of their surroundings. There’s an energy flow between the two holding the chair and the Ong Yah, and somehow, they will be able to understand what the Ong Yah is instructing and write it down on a paper.” – Gan You can’t see it, but we’re told that the Ong Yah is sitting on that chair in the picture. Image as provided from Gan

And it’s only when the Ong Yahs ‘write’ down that a Wangkang should be held, that the temple will get to work on building the barge. Furthermore, the barge is not like those paper ships that you’d burn for your ancestors to take a cruise in the afterlife. They use actual wood to build the barge. It can usually take them up to a year to prepare for the festival.

“We’re not professional barge builders. Not only will the Ong Yahs give us a date and time on when to hold Wangkang, they will also give us specifics on how to build the barge, which we will follow.” – Gan

Instead, the purpose of inviting the spirits to the barge is to give them a new chance at the…afterlife and work for the Ong Yahs on the barge. This will, in turn, allow the spirits to build enough merits and have a chance of reincarnating into a better realm. The hymn sung to invite the spirits. Image as provided from Melaka In Fact

But there is something peculiar in all these though, because according to Melaka In Fact, they’ve noticed that every time the Ong Yahs demanded for a Wangkang Festival, there’s almost always some crisis happening in that very year, whether in the country or around the world.

So, you know, it’s believed that these terrible things were happening because terlalu banyak wandering souls in the living world, shipping in a boatload of negativity that the world can hardly handle. And a Wangkang Festival can help in that, because, you know, the barge will send away the spirits, allowing for the entry of prosperity. 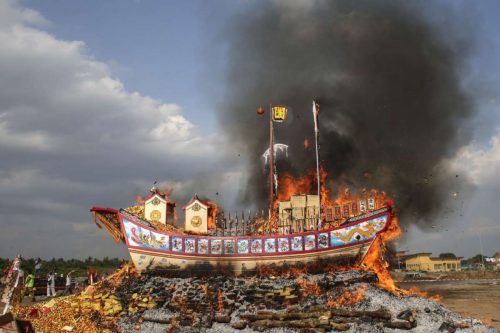 And religious or not, you gotta admit it’s a little bizarre, given how it seems like the Ong Yahs can predict disasters before they even happen, thus warranting a Wangkang Festival. And keeping up with the pattern of predicting bad things…

The Ong Yahs might have even predicted the Covid-19 pandemic…in 2017!

As we’ve mentioned above, as scarce as it is, it would usually take the people at Yong Chuan Tian Temple around one year to fully prepare for the Festival. However, this time around, Gan told us that it was in 2017 when the Ong Yahs instructed the temple to hold a Wangkang Festival in 2020. As in, three years ago, the Ong Yahs might have already seen a disastrous 2020 coming.

But at the time, the organizers were flummoxed, because it meant they would have three years to prepare, which were two years more than usual.

“The Ong Yahs told us we must do it properly. We must be united in preparing and not fight at all.” – Gan

This is, Gan speculated, because 2020 is a Geng Zi Year, which in Chinese astrology occurs every 60 years and have historically been wrought with disasters, such as the First Opium War and the American Revolution – you can read about it here. Essentially, Gan told us that the Ong Yahs predicted that the Geng Zi effect in 2020 will involve large parts of the world, including Malaysia. Image from Know Your Meme

Not just that, according to Gan, the Ong Yahs also apparently gave them a name for the barge for the Wangkang Festival this year: “Guo An“, which basically translates to national prosperity.

And, well, as you know, Malaysia has been having a pretty rough year in 2020, from a Covid-19 outbreak that doesn’t seem like it’ll be ending soon to a political crisis that keeps coming back to bite us in the butt. So, you know, if you believe in that kind of stuff, there’s a high possibility that the Ong Yahs for Wangkang Festival predicted not just Covid-19, but also the political crisis that we’re currently facing.

“Now, the Ong Yahs never really told us what the disaster will be, but it’s obvious that they knew it would be more serious than ever. I believe that the Ong Yahs already foresaw Covid-19 and maybe even the political instability back in 2017, before we all knew it.” – Gan

So, you know, when your boss tells you to do it, you do it. The people at Yong Chuan Tian Temple went ahead to prepare for the Wangkang Festival in 2020 in advance, building the barges and inviting the deities to join them on the barge etc. However, it turns out that the supposedly foreseen Covid-19’s more serious than the Ong Yahs had previously predicted, because…

They have to postpone the procession of Wangkang Festival in 2020

Originally, they were instructed to do the procession on the 15th of November, 2020 and burn the barge on that very day to, you know, burn away the negative elements and bring in positivity. But then Covid-19 didn’t give face to the Ong Yahs and came to buat kacau again, making it impossible for a procession to happen, given that it will highly likely involve mass gatherings.

As such, the Malaysian National Security Council (NSC) told Gan that they have to cancel or postpone the festival until things are safe. And in the end, the temple decided to postpone it all together.

“They pretty much told us that we definitely don’t want a Cluster Wangkang. So I came back and talked to the Ong Yahs, and they agreed that we can postpone the festival.” – Gan

But postponement doesn’t mean entirely canceled. Gan informed us that prayers will still be held at the temple. And yes, they will still go around Melaka to collect the spirits, only with smaller boats, which they will then transfer to the barge. The only thing is that the barge will not go out or be burned at all until further notice. 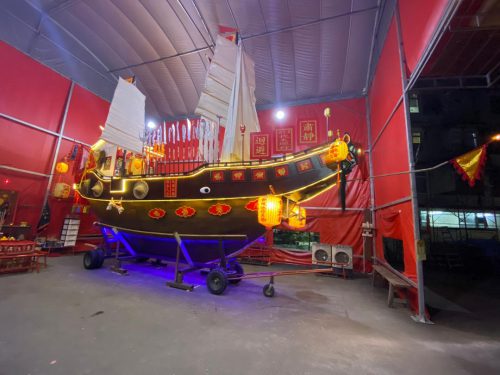 The barge for the Wangkang Festival in 2020. Image as provided from Gan

Now, whether the Ong Yahs actually predicted the disasters in 2020 to warrant a Wangkang Festival or if it’s just superstition, we can’t tell you – it’s totally up to your belief systems. But still, the Wangkang Festival is considered a “once-in-a-lifetime opportunity for temple devotees and even history buffs all over the country“, given that it really happens very scarcely across the years.

While Gan can’t be sure as to when the procession will happen, if you do find yourself in Melaka when it does happen, it’s perhaps a unique experience you don’t wanna miss. And we suppose we can only hope that when the barge burns away, the calamities of this godawful year will burn away with it.