Moving houses can be a hassle at times. From the process of packing our belongings to calling the lorry guy to move your belongings to unpacking things after you move to another place. Don’t you wish you could just… move your house instead?! Like this?? Images from Make a Meme and Herbertrocha – DeviantArt

While some might still contemplate if it is even possible to move a house (like literally), villagers in Kuala Kangsar, Perak with the help of some students from two universities carried a 6 tonne house to about 150 metres away from its original location with their BARE HANDS! About 150 people joined the project called ‘Mengusung Rumah Lama’ (lifting old houses) where they successfully lifted the 80-year-old house.

Actually, these people didn’t organise this project for fun. The project was based on an actual, almost forgotten tradition called ‘Angkat Rumah‘ (House Lift but not to be confused with a house elevator) which used to be popular among the Malay kampung people.

Similar to other normal people who would move from one house to another, people who literally move their houses have 1001 reasons to do so. While some would practice this tradition when the household needs to be reorganised due to death or birth in the family, or when the land or house itself was bought or sold, some are simply attached to their houses. Yup, you’ve guessed it! Some people love their houses so much they actually move them. 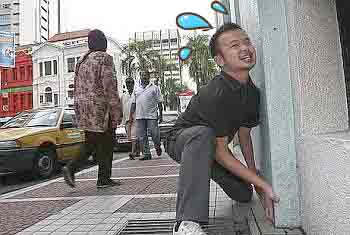 In the name of love… Original image from The Star

The Malay kampung people in the Northern states of Malaysia like in Perak and Kedah are the ones who would commonly practice this tradition. Logically, only kampung people who live in the traditional Malay houses could practice this tradition because the structure of the house which is built with pillars makes it easy to be carried around. And when we say easy, we meant easier compared to modern, concrete houses.

The Malay people have been practicing this tradition since the colonisation period. And since the tradition is commonly practiced in the 60s and 70s, the coordinator of ‘Mengusung Rumah Lama’ told NST that the last time such an activity was conducted was in the 70s. But wait… we actually found out that the tradition is still being practiced in places like Perak and Kedah. For instance, a man’s house in Kuala Kangsar, Perak was carried by the villagers with the help of gomen agencies like Jabatan Kerja Raya (JKR) to a land provided by the gomen. The man reportedly had to move his house as he was asked to empty JKR’s reserved land (where his house was previously at).

Villagers of Kampung Pering, Kedah, on the contrary, have been practicing this tradition for over 20 years! In 2015, a house in the village was carried by 60 youngsters. Who needs to go to the gym to lift weights when you can just lift a house, eh?!

“We carried and moved the house, which was sold to a neighbour, together to a new location which was about 150 metres away.” – Ku Radin Ku Daud, the son to the owner of the house. Translated from Sinar Harian.

Now that you get the gist of this whole tradition, you might question how these villagers participate in this tradition? Simply join only ah? Or need to register??

If you’re living in the kampung, it might be common to gather and do things together-gether. Gatherings especially congregational prayers are opportunities for people to get involved in societal work, this include the tradition of lifting houses. But Malaysians, in general, also like to do things together-gether. Image from NST

Normally, the Imam of a mosque or the Head of Villager would be the one to announce to the kampung people about moving a house. So, this is how you could participate in this tradition if you’re interested la. The announcement is normally made a week before the process of moving began but, in some situations, the process would begin earlier.

Unlike the typical way to move to somewhere new (where you have to pack your belongings), people who are involved in lifting a house would cut off bamboo sticks (these are the strong types unlike the ones used to make lemang). The amount used for this purpose depends on the size of the house and these bamboo sticks would be tied to the beam of the house. Just in case ugaiz dunno what a house beam looks like (and where it is). Images from Utusan and Slideshare

Despite with the help of maaaaany people, some might still wonder how the heck they could move these houses which weigh tonnes! Well, logically, the owner of the house would have to empty his or her house before the kampung people can lift it. This is to reduce the weight of the house, obviously.

This is because if a person falls, he or she would die in a stampede as the kampung people cannot make a sudden stop.

And we mentioned how the kampung people had to be careful not to hit trees or other buildings. A person who acts similarly to a ‘tour guide’ known as Tekong would guide these people as they carry the house to the destination. The ‘tour guide’ would make sure the kampung people are made aware of the obstacles ahead of them besides playing a role to guide them to the exact position to locate the house once they arrive at their destination. But wait… even the ang mohs in the US are lifting houses??

Before we kena flame by Indonesians who would claim that this tradition came from them, let us clarify something. The tradition of lifting houses isn’t only being practiced in Malaysia. Apparently, we found out that there are other countries in Asia who practice this tradition too.

In Indonesia, the tradition came from Southern Sulawesi. The tradition of lifting houses is normally practiced by the Bugis people. The process of lifting the house and method – by using bamboo sticks are similar to our tradition. In fact, the structure of both the Malay traditional house and Bugis house look quite similar!

But it only make sense why these countries would share our tradition… Since they’re all Asian countries. But, oddly, the ang mohs in America did this too!

While it might not be their tradition anymore but, a few years back, the Amish people in Pennsylvania actually moved a house with their hands. About 80 Amish men lifted the house with a man and a dog to guide them to its new location. If you don’t believe it, you can check it out in the video below:

At the end of the day, it doesn’t matter where the tradition is EXACTLY from, all these countries have similar concern towards this tradition. And that would be if…

It might end up as a tradition of the past

But did ugaiz know that the 6 tonne house mentioned in the intro would be turned into a cultural gallery to serve as a tourist attraction?? The participants of the project might have been proud to be a part of history. Speaking of which, another similar project was held in KL a few years back. ‘Projek Angkat Rumah’ was organised by Liew Seng Tat to allow Malaysians to have a good time besides bringing everyone together. They carried a Malay traditional house from SK Sentul Utama to KLPAC’s car park. Malaysians who participated in the project were able to tell the story of how they moved a kampung house in KL to the next generation! How cool is that?

But, although the tradition sounds cool, it is sad how it might not be as relevant as it was before. Most of the time, traditions would no longer be practiced due to reasons like lack of education and exposure towards it or the change in physical environment which affect a society’s daily life. However, it seems like the only issue with this tradition would be the development of houses. It only make sense that you can’t move concrete houses… or even apartments as they are stuck to the ground!

And the next time you think of moving to a new place, you might opt to (literally) move your house. 😉