With the anniversary of Malaysia Baru approaching, here’s a question to think about: is the rakyat regretting choosing Pakatan Harapan (PH)? Some cats may be. Imgs from Buzzfeed and Pakatan Harapan.

Now, before we brandish our keyboards and start Googling who sponsors Cilisos, it’s not just us asking that okay. Rafizi Ramli did surveys on the subject matter, and what he found was that the approval ratings for Dr Mahathir, reflective of the Federal Government, had been ‘plunging, rather rapidly‘ from shortly after GE14 to December last year.

“I hate to be the bearer of bad news, but someone must bell the cat… There is a consistent 20 per cent drop across all races. Malays (from 66 per cent to 45 per cent), Chinese (from 87 per cent to 65 per cent) and Indians (from 84 per cent to 64 per cent). In some states, the newly elected Menteri Besar, whom some of the sampled respondents could not name correctly, got a higher approval rating than the Prime Minister,” – Rafizi Ramli, as reported by NST.

These findings have been somewhat echoed by other leaders from Pakatan, and other research firms had done their own research into the matter as well. KajiData recently shared their findings that overall satisfaction for PH had dropped among youths, and their economic confidence in the new government as of December last year was almost the same as when BN was in power. With Pakatan having recently lost another by-election, we thought we’d give it a go and see if we can find something out as well, just for fun.

As for how we’re gonna do that…

We’ll be looking at by-election results since GE14 Why election pictures always like dis wan? Imgs from OneNewsPage and HyperTorch.

Since GE14, we’ve had a total of seven by-elections so far, with another one coming up in May. Of these seven, two (Cameron Highlands and Port Dickson) are for Parliamentary seats, while the other five were for state seats. Being an MP seems to be a very dangerous job, as evident by the reasons for why these by-elections were held:

Here’s a timeline to visualize how far apart each of the by-elections were from GE14:

As you can see, of these seven seats, five were held by Pakatan and the other two were held by BN. Only one seat changed hands: PH failed to defend its seat in Semenyih, and it went to BN. Other than that one, the rest of the seats remained with the party it left GE14 with. However, one of the things we noticed immediately was that  the number of votes that they actually got, were considerably less votes than they did in GE14. We know… it looks bad. So what is going on here? No, they’re not moving over to the Opposition, even if the percentage of votes for Pakatan in Seri Setia did drop. But….

It’s because there were less voters in the by-elections compared to GE14.

For the first three by-elections, it’s more about people not turning up to vote: the voter turnout in Sg Kandis, Balakong and Seri Setia by-elections had been less than 50%, compared to 80%-plus during GE14. So let’s look at percentages gained or lost instead.

Since the case here is judging the support for Pakatan based on by-election results, we will only be analyzing the votes for Pakatan and won’t be going too much into votes for PAS, BN, and… others (yet). With that said, we compiled the percentage of votes that Pakatan got for the 7 by-elections and compared them to the votes they got for GE14, with the exception of Rantau.

Why? Because BN’s Mohamad Hasan aka Tok Mat was the only candidate for Rantau in GE14, as PH’s Streram Sinasamy wasn’t allowed to be nominated back then because he forgot to bring documents or something. So we’ll be comparing Rantau results to GE13 instead. With that being said, let’s look at the percentages: As you can see, with the exception of Seri Setia and Semenyih, Pakatan generally gained a bigger share of the voters in the by-elections than they did in the previous major elections. But with the drop in the overall actual number of voters, an interesting question could be…

Could the Opposition had won had more people came?

Now that we’re done looking at percentages and raw voters, let’s take a look at how much majority Pakatan got. For the uninitiated, majority is by how much a political party won in an election, so the bigger the majority, the more stable a seat is for that party. Comparing Pakatan’s majority in the by-elections to the ones they got back in GE14/13, we got this graph: While it’s a given that a lower turnout will mean a lower majority, the impact had been quite astonishing in the first three by-elections. Especially in Seri Setia, where it almost cost Pakatan their seat. While in Semenyih Pakatan had a slight lead in GE14, that went away with the by-elections.

With the voter turnout lowering the majority like this, we wondered what would have happenned if Opposition voters had been more motivated for the by-elections. Assuming that no one switched their preference and PAS and BN stuck to their current strategy of not competing together (leaving only one strong party to compete against Pakatan), we compared Pakatan’s by-election results and the sum of PAS and BN supporters in the GEs: So for the first four by-elections, both the supporters of Pakatan and the Opposition have been reduced considerably due to the low turnout, but at different rates: about the same for both sides for Sungai Kandis, less Opposition for Balakong and Seri Setia, and less Pakatan for Port Dickson. Looking at the graph, it would seem that they had the best chance at Sungai Kandis, and considering the lower Opposition turnout in Seri Setia, there as well. As for Port Dickson and Balakong, even the combined initial Opposition supporters in GE would not have been enough to topple Pakatan there, so that’s that.

So far, we’ve looked at the numbers and the resulting charts, but…

Please address your hate for us by using the hashtag #ihatecilisos kthx Gif grom Giphy.

At surface value, elections (in Malaysia at least) are just a numbers game: whoever gets the most votes wins. But regarding what we set out to do in the beginning of the article, i.e. telling whether the overall support for Pakatan had lessened based on by-election results… it’s actually a lot more complicated than a bunch of graphs and trends. For one thing, while one may infer that Pakatan had lost their touch since they won the first four by-elections and lost the recent three, it should be remembered that each by-election happen at different places, and thus have different circumstances.

Let’s look at some examples that made each seat so unique through some more charts. For these next charts, we’ll be using

For Sungai Kandis, we can see that PAS bowed out of the by-election to let BN take the lead (Awwww). This may or may not have resulted in a 5.8% increase for Pakatan and a 11.5% increase for BN as well. We say may or may not, because the turnout had been so low that one may wonder if them bowing out benefited either side at all.

For Balakong, the difference in strength between Pakatan and the Opposition seem quite overwhelming, but still, low turnout, so we can’t say for sure.

For Seri Setia, BN was the one who bowed out (Awwww), to improve PAS’ chances and this resulted in a whopping 31% increase in support for PAS, despite them commanding the least votes in GE14.

For Port Dickson, BN pulled out, but despite the controversy surrounding the reason for the election and the participation of four independents, Pakatan pulled a comfortable win. Also, this was Anwar territory la. And he picked up rubbish (kinda).pick up rubbish, pick up votes. Image via the Star 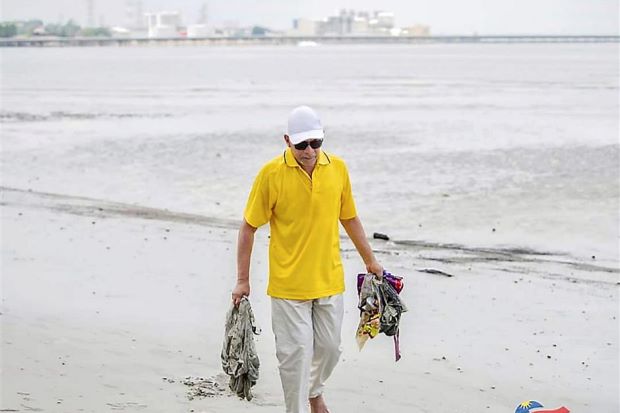 pick up rubbish, pick up votes! – Image via The Star

For Cameron, the turnout had not changed much, and while Barisan won with a smaller majority in GE14, PAS bowing out seemed to increase that majority tremendously.

For Semenyih, PAS bowed out to support BN, and this may have given BN the edge they needed to win the seat back from Pakatan. Also, some had attributed Pakatan losing the seat due to relatively terrible campaigning and the choice of a weak candidate, so that’s that.

And finally, for Rantau, which we compared to GE13… there’s not that much difference, actually.

While we can’t really draw a trend of the number of votes each party got, perhaps we can do so for the voter turnout, which had been very low soon after GE14. In the very first by-election at Sungai Kandis, with a voter turnout of only 49.4%, PKR’s candidate Mohd Zawawi had said that quite a number of voters were not even aware of when the polling day was, and one reason for that unenthusiasm may be chalked up to the voters being too confident of PKR’s chances of victory.

“Most of the voters feel PKR is in a comfort zone. Since the first leg of campaigning, we met voters who were too confident of PKR’s chances. And GE14 was only recently concluded. So probably some of the voters have other plans today.” – Ahmad Zawawi, to NST. Honeymoon period notwithstanding, due to the different circumstances of each by-election, we’ll have to say that it’s too soon to be able to tell whether or not overall support for Pakatan had diminished based on their results alone. But if you’re looking for the support for Pakatan in each of the constituencies involved, well… there are other things to consider, but we guess you can get a hint of that from these by-election results.